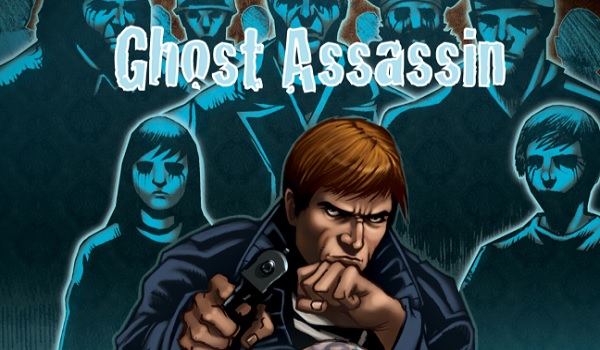 Hello there all you wonderful fans of the sequential art medium! Today we will be taking a spoiler-free look at Darkslinger Comics‘ upcoming Ghost Assassin #1! The book promises questionable morals, murder for hire, ghosts, and all sorts of other nefarious and death-related things. Ah yes, this sort of story sounds perfect for a nice day at the beach. Relaxing on one of those folding chairs, catching some rays, enjoying a cool lemonade, and reading Ghost Assassin (I don’t get out much). But enough about me and my quickly disintegrating social life, let’s take a look at the book!

Welcome to “After Life Flower Arrangements,” for all your post-life flowery needs. It is owned and operated by David, who also just happens to be an assassin. That’s right gang, David has figured out how to corner the market on floral funeral arrangements in a very creative and direct way. Just kidding, but he does take payment to…ehem…remove people from the land of the living. In this first issue we also meet Todd, a ghost that is bonded to David and who likes to follow him around. Interestingly, Todd was David’s friend in the pre-afterlife (original designation, do no steal) as well, so there is definitely a story in there somewhere.

Now, David is not made of pure evil you see. Many of the marks he is given are to be euthanized due to their terminal conditions and what have you, but he will also occasionally do whatever it takes for a stack of cold, hard cash. It seems as though his work sometimes causes him to have personal feelings and despite his disagreements with some of the jobs he is given, he will still go through with them. Gee, David must really need the money! Also, I think this makes him…let’s say…half evil? 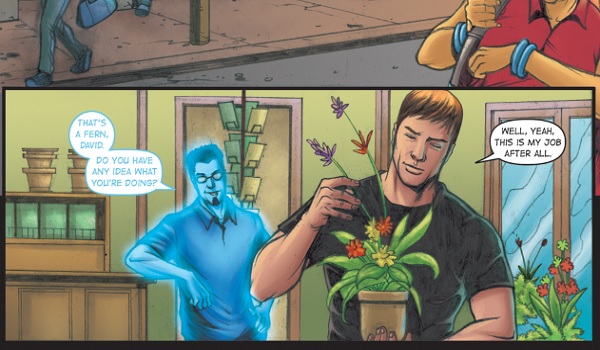 One of David’s biggest problems (besides all the crime and stuff) is that the ghosts of his victims typically aren’t very satisfied with the results, so they like to stalk him from time to time. We can only imagine the enormous emotional distress this may cause David, and one must wonder: will his crimes catch up to him?

The creative team behind Ghost Assassin consists of Adam Watson (words), Joel Cotejar (pencils) and Gulliver Silva (colors). Rounding out the team is Ceci De la Cruz (cover colors) and Katheryn Meyers (editor). The first issue also includes a short story called “Prelude” that also features David and his antics, which is also written by Watson with pencils by Charles Carvalho and colors by Ed Bola.

So then, let’s talk about the Kickstarter campaign for Ghost Assassin, shall we? Those who donate to the campaign will receive digital or physical copies of the book (or both), “raw editions” of the first issue, a t-shirt, art prints, or an appearance as none other than yourself as either a living or ghostly character in the book. Of course, what you get depends on what you donate, and there are also stretch goals. The campaign also states that any leftover funds will go directly towards the creation of the next installments of Ghost Assassin. For more detailed information about the campaign, click this handy internet link! 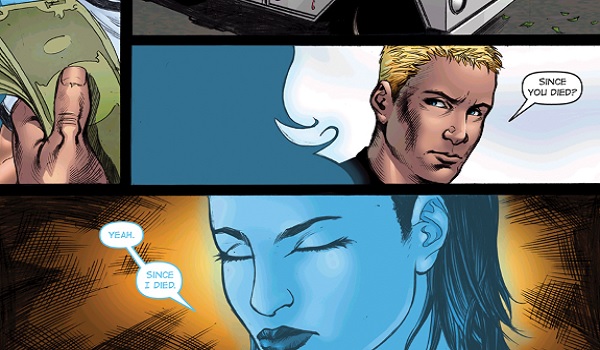 Still on the fence? Ghost Assassin has a fair amount of depth to it, and it raises all sorts of moral questions and dilemmas. The book is most certainly not for younger readers as it contains violence, adult language, and some degree of “adult situations” (hubba, hubba). The first issue leaves a lot open to be explored in upcoming installments and has just enough mystery and intrigue to keep you wanting more. It has this writer’s seal of approval (penny flattened on train track), so go ahead and give it a try. For more Ghost Assassin, check out Darkslinger Comics’ Facebook, Twitter, Instagram and YouTube channel.

Will you be picking up a copy of Ghost Assassin? Let us know what you think in the comments section below or on our Twitter page!