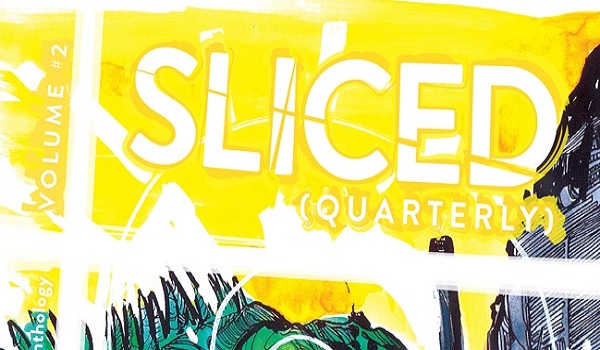 Depending on whether you believe in those mythical creatures known as groundhogs or which part of the Earth you are living on, Spring may just be around the corner (please, please, please), which can only mean one thing: comics! Were you expecting me to say something else? That’s right friends, we recently had a chance to speak with Ken Reynolds, editor of the massive comics anthology Sliced Quarterly, and he had a whole lot to say about Sliced and the new Kickstarter campaign that is currently running. Yes, currently as in now, so if you haven’t had a chance to check it out, you can go ahead and do that while we wait here. Oh, who am I kidding? I just can’t wait to get this interview started, so here we go!

Reynolds: I’m Ken Reynolds. I’m a graphic designer and comic creator. I wear a lot of hats in small press comics. I write, I draw some of my own scripts and I letter a lot of other people’s books too. I also edit the experimental comics anthology Sliced Quarterly.

AP2HYC: Can you provide a little background on Sliced for those that are unfamiliar with it?

Reynolds: Sliced is a playground for comic creators to push the boundaries of the comics narrative; to tell stories that use the unique storytelling techniques that comics provide. We aim to publish simple, grounded stories in extraordinary ways.

AP2HYC: How did the idea of doing a comics anthology come about?

Reynolds: I started out as a letterer, and doing that job you meet a lot of different creators and creative teams. During the course of most conversations there was a topic that would, more often than not, crop up. There would always be a comic or idea that a creator would be sitting on. Something a little different, something they had either hidden away in a drawer or not bothered pursuing because they couldn’t think of any publication that would include it. So over time I recognized a common trend and began to introduce the idea of Sliced. A place where all these “misfit toys” would work together.

AP2HYC: What are some of the themes that readers can expect to see tackled in Slice?

Reynolds: We have a huge expanse of themes. We call it a “Slice-of-life” anthology and it lives up to that. There are representations of many facets and experiences of everyday life. But the difference is the way the stories are relayed, using comics to their full potential.

AP2HYC: How did you wind up connecting with all the creators for this anthology?

Reynolds: To begin with I sent out an email to a lot of the creators I’d worked with as a letterer. People I already knew and more importantly, already knew me. Trust is a massive commodity, and I was lucky to have banked a bit with some very talented people. Enough to draw together a first issue to prove the concept. After the first release of the first issue, more creators became interested and it all snowballed from there. We’re now at a point where I’m working on an issue ahead with content and we have a wide pool of contributors that dip in and out. Word of mouth if easily our most effective recruitment tool. 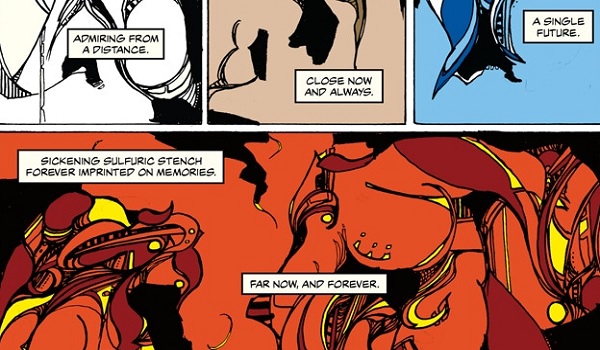 AP2HYC: What are some of the most popular stories in Slice?

Reynolds: Popularity is a tough one to gauge. Anthologies, on the whole, are hit and miss affairs. It’s very unlikely a reader will love every single comic in the collection. I realize this. But I edit in such a way that there is a flow. Each story helps the ones around them stand up. I try to arrange them so they have the best possibility of shining. The joy is that everyone will have a different favorite because we cast such a wide net, but even if a story doesn’t quite hit you in the sweet spot, I guarantee every page holds something memorable or special. An attempt at something interesting. Even when some things fail, there is admiration to be had in witnessing the attempt.

AP2HYC: Are there any extras packed into the quarterly anthology editions?

Reynolds: The print collections draw together the four issues from the previous year. I then include content -usually around an additional issue, say 20-24 pages- that will not be published or made available on our website.

AP2HYC: What kinds of rewards are being offered on the Kickstarter campaign?

Reynolds: The book itself is 140+ pages, perfect bound into a trade paperback. We had a great reaction to the look and feel of the print edition last year, we will continue with the standard this year. There are chances to get limited edition bookplates which include sketches from contributing artists. We are offering Comichaus app subscriptions, and I’m providing the opportunity to get one of my “nesting doll art commissions,” as well as access to my lettering and editorial services for vastly reduced rates.

AP2HYC: How has your experience been with using crowdfunding?

Reynolds: Every book I’ve published has been via Kickstarter. I’d have done very little without it. It’s a platform that has allowed me to establish and grow a readership. It’s a lot of work, a lot of stress, time, energy and joy when it all comes off. But if it were easy, it might not be as much fun.

AP2HYC: What are some of your favorite comics, books and movies?

Reynolds: I’m really enjoying Tom King‘s Batman run, anything Jason Aaron writes, and the new Captain America run by Mark Waid and Chris Samnee is a lot of fun. As for prose, I’ve just completed a re-read of The Lord of the Rings; I think I enjoyed it more than ever this time around. I’ve also just finished Pat Mills‘ novel Serial Killer: Read ’em and Weep which is a deliciously dark and twisted piece of 70’s comics nostalgia. I’m aiming to get into the Expanse books as well after enjoying the TV series. I haven’t watched a lot of movies lately. I love pretty much every Marvel movie they deign to release. As long as a film grips me and makes me smile, I’m all for it. I just want to be entertained.

To get your own giant Sliced anthology, head on over to the official Kickstarter page and pledge today! Don’t forget to share your opinions in the comments section below or on our Twitter page!