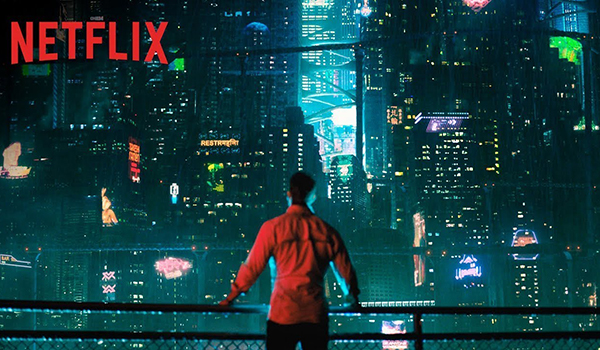 This weekend, Netflix released the first season of Altered Carbon, a neo-noir with a most intriguing premise. Way in the future, humans have found a way to download their consciousness into a Digital Human Freight (also called a “DHF” or “stack”) which can be used to transfer a person’s mind into various bodies (called sleeves). In essence, a person can live forever by jumping from body to body, and that’s more or less what everyone has done. No matter what damage happens to a sleeve, a person isn’t really dead as long as their stack remains intact.

The story centres on former terrorist Takeshi Kovacs, brought back to life after having his stack “on ice” (not in a body) for 250 for crimes against the government. Kovacs return is thanks to one Laurens Bancroft, one of the richest men in the city, who wants to hire Kovacs to solve Bancroft’s own murder. Or rather, the murder of one of his sleeves.

And what follows is already one of the best new shows of the year.

It’s been rumoured that Netflix gave Altered Carbon the highest per-episode budget of any of its original shows. True or not, you can see that they definitely spent money on this one. The effects, writing, and acting are all top-notch. The effects alone blow Netflix’s Marvel shows out of the water.

The cast was definitely a highlight for me. I usually find Joel Kinnaman to be as bland as dry toast, with his performances in Robocop and Suicide Squad generally forgettable. I chalked him up as just one more of those generic white dudes you always see running around. But here, he shines. The weight of the show falls squarely on his wide shoulders, and he carries it well.

However, like many characters on the show, Kinnaman isn’t the only actor to play Kovacs. Will Yun Lee‘s performance is equally stellar. The character remains surprisingly consistent regardless of which face he’s wearing, and it speaks to the actors’ credit that my suspension of disbelief never broke. It also doesn’t hurt that I absolutely love Will Yun Lee in just about everything. The flashback episode where he gets his most screentime is one of my favourites, and left me hoping we get to see more of Kovacs past in season 2. Dollhouse alums Dichen Lachman and Tahmoh Penikett were also definitely highlights. Lachman’s unique look lends a lot to her character, and Penikett is always a pleasure to watch.

The real scene-stealer was Martha Higareda as Ortega, a cop with a chip on her shoulder and a personal connection to Kovacs. The scenes with her family discussing the religious implications of spinning someone back from the grave and into a new sleeve were some of the best.

Speaking of those scenes, the writers on the show did a great job at fleshing out this world. The attention to details – such as Catholics believing resurrecting a stack is a sin, having sentient AI hotels, and being able to enter VR worlds – really brought the story to life. Of course in a society where the mind is more important than the body, people would flock to VR cafes to meet up (or do *other* things) and forget about the real world.

The show’s aesthetic borrows heavily from classic cyberpunk worlds like Blade Runner and Total Recall – lots of dark nights illuminated with glowing neon. But this look is kept to the ground, while the rich Meths (think the 1% of the 1%) live in white palatial towers high above the clouds. The trope of having the upper class in a clean white utopia plays nicely, especially since the murder in question happened inside a locked room in one of the richest Meths towers. The blood splattered on the marble wall is a reminder that the Meths may be able to evade death, but violence is ever-present.

Speaking of violence, the action throughout the season is top-notch. You’ll forget all about the various Defenders’ hallway battles after watching a zero-G three-way fight to the death – or sleeve-death, as it were. It’s hard to pick a favourite, although the flashback to Rei and Takeshi meeting for the first time in years was definitely a highlight. There’s a lot of clever weapons and things we haven’t seen before – which I won’t spoil here!

The best thing about the show, though, was the ideas it brought up. The implications about immortality, the soul, and what it means to be human were as good as any Dickian venture. I’m still trying to sort through it all. And for me, that’s really all I can ask for from a TV show – to make me smile and make me think.