Home » Adventures in Science Delivers an Engrossing and Entertaining Anthology 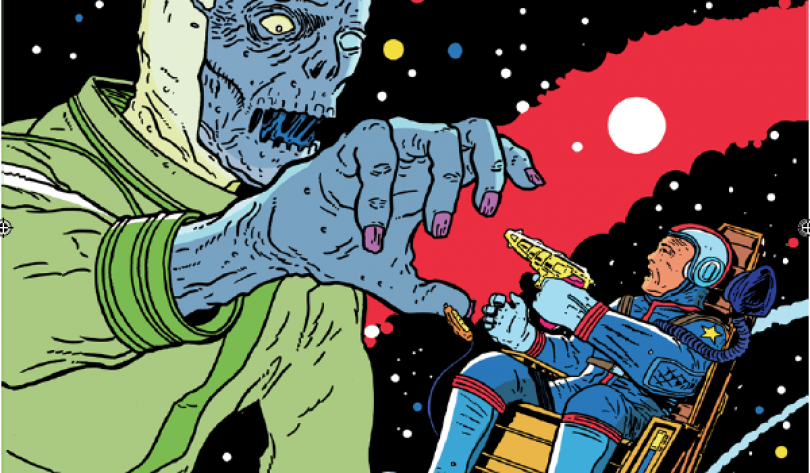 Adventures in Science is just about the most appropriately named comic I have ever read. This collection of thirteen separate short stories covers a wide array of science fiction premises and settings. The art and writing styles are very different story to story, but all share some common themes: technology, humanity, violence, exploration, and more. Some are comedies, albeit dark comedies, and others are entirely dramatic. They take place in the past, in the future, and even on other planets. If you enjoy The Twilight Zone or Black Mirror, this comic will feel very familiar in tone.

With any anthology, there are stories that stand out as great and others that make less of an impression. And because there are thirteen different stories in this book, it might be a bit of a slog to read thirteen different mini-reviews. On top of that, because these stories are so short and benefit greatly from their clever twists, it would be a shame to spoil all of them. For that reason, I would like to highlight only a handful of stories from Adventures in Science– some I enjoyed, others I found frustrating- to give a general impression of the book.

Time on Ice – written by C.S. Baker and Matt Finch 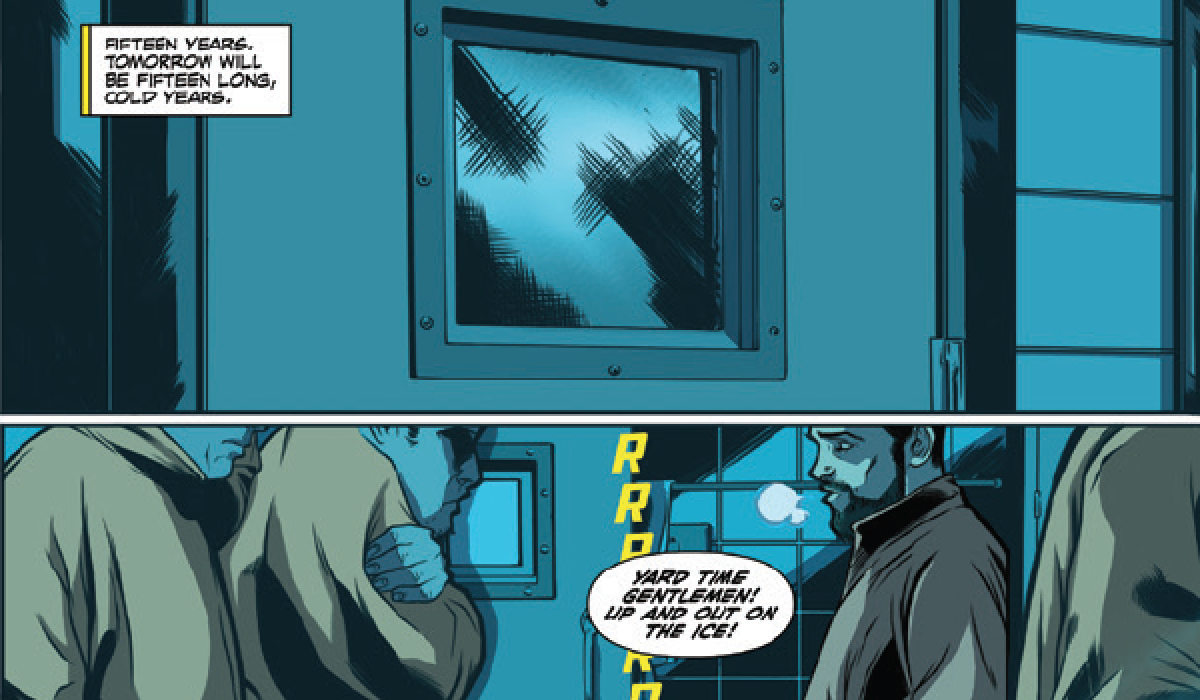 This analysis of criminal justice starts our anthology off on a good foot. Though brisk, “Time on Ice” fits a lot into its few pages. We meet James, a soon-to-be released convict, as he goes through his last day of incarceration. He narrates about the social order of the prisoners, the crime he committed, and the tragedy of where he has been held. Vincenzo Sansone‘s artwork and Greg Menzie‘s coloring are top notch and perfectly illustrate the coldness and isolation of James’ prison. When flashing back to before he was jailed (and for the story’s ending out of the prison), the color palette changes from blues to reds- a very effective way of changing tone. The crux of the story’s is in its twist, which proposes a high-tech way for punishments to better fit their crimes. In just six pages, the reader is left with a genuine, thoughtful ethical dilemma. A great first adventure in science! 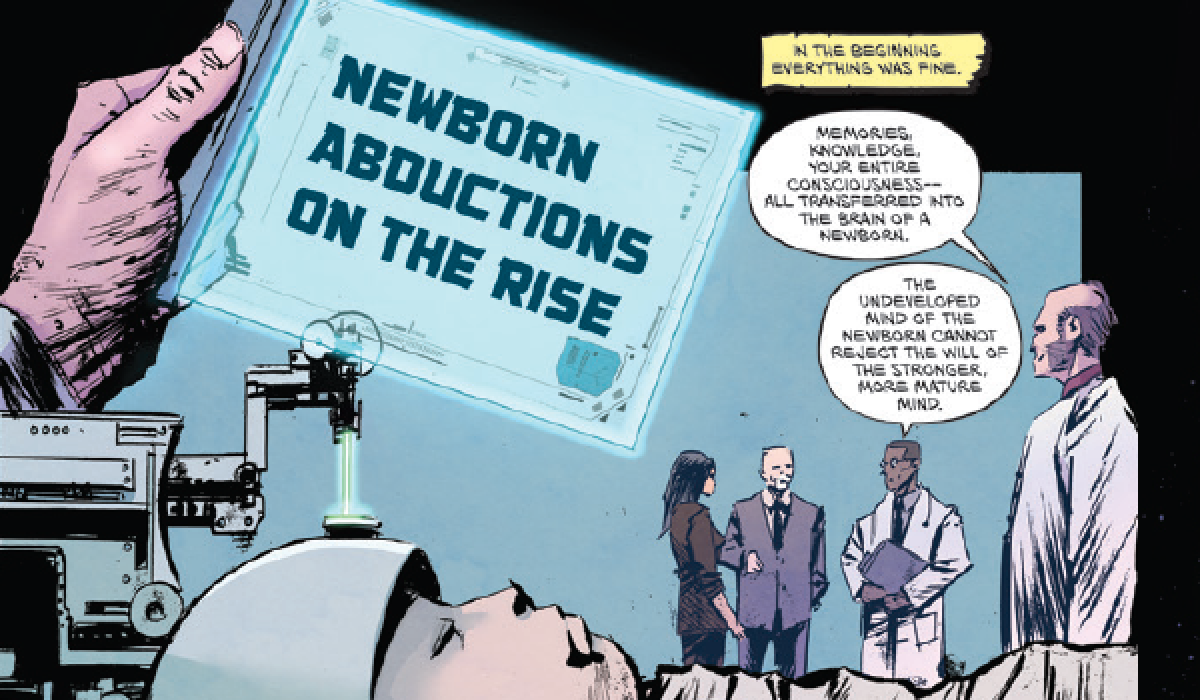 The art for this story by Eli Powell stuck with me more than its plot, but the two compliment each other nicely. We are transported to a near-future where the dying can transfer their minds into the bodies of babies, effectively extending their lives without end. A mysterious man, apparently displeased with this system, walks alone on the streets, monologuing to the reader about what’s going on. The story’s one bit of action comes right at the last page, ending on a powerful note, but not connecting all that great to the exposition dump of the previous pages. The context of “Vita Extensum” is fascinating and full of potential, but it might be too full of potential for such a short story. I would love to see this scenario re-explored in a longer form.

14 Arms to Hold You – written by Matt Fitch and C.S. Baker 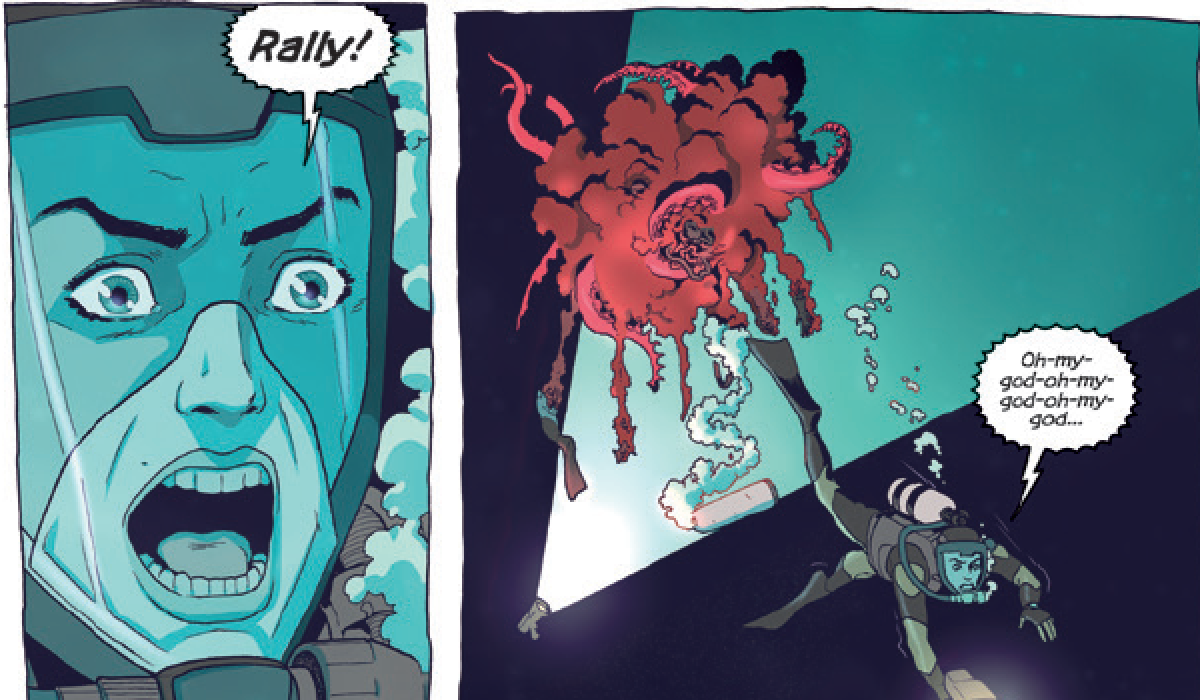 This was the only story that left me unsatisfied and confused. To best explain why I will be spoiling the ending. Two divers are chased by a monstrous octopus underwater. The tentacled creature kills one of them in a truly horrific panel (Jacen Burrows‘ animated artwork is worth noting), but then the story cuts back to the two divers drinking on a boat. The surviving diver is confused how she got back to the boat, but goes along with the conversation. Then out of nowhere, the other diver’s face contorts into an evil grin, and we are back with the surviving diver who has also been snared by the tentacled beast. The octopus returns to a… wait for it… secret, underwater North Korean military base where it joins several others and devours another diver. Two North Korean officials watch with glee and vow to attack the United States with these new creations. Honestly, I’m lost here. As I said before, the artwork is great and the first pages of the diver-octopus chase are suspenseful. But this political ending comes right out of nowhere and leaves me totally disoriented. Whatever they were going for here just did not work for me. 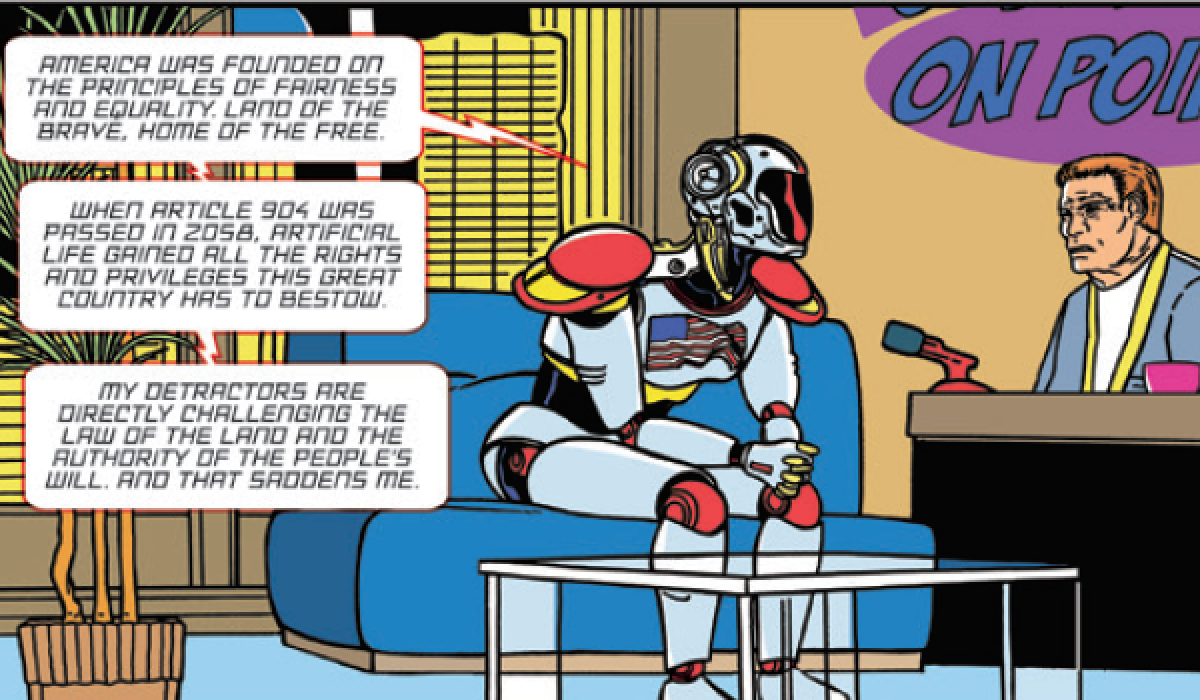 For a great political story in Adventures in Science, we have “Campaign 2079” which looks at the role of religion in politics. Except in this futuristic world, the candidate is a robot, physically unable to believe in a higher power or rely on faith. Most of the comic shows the candidate bot on a talk show, answering calls from religious would-be-voters. The writing here is superb and looks at this  controversial topic with care. But every few panels, we see a glimpse of someone in the shadows, slowly assembling a gun. The twist of this comic (who the candidate’s assassin is) ends the story on a complicated note. There are a lot of questions left unanswered, but they are exactly the right questions a reader wants to be left with. The art by Shaky Kane pops off the page, with lots of vibrant primary colors and sharp penciling. This is easily my favorite story in the anthology.

No More Secrets – written by Matt Fitch and C.S. Baker 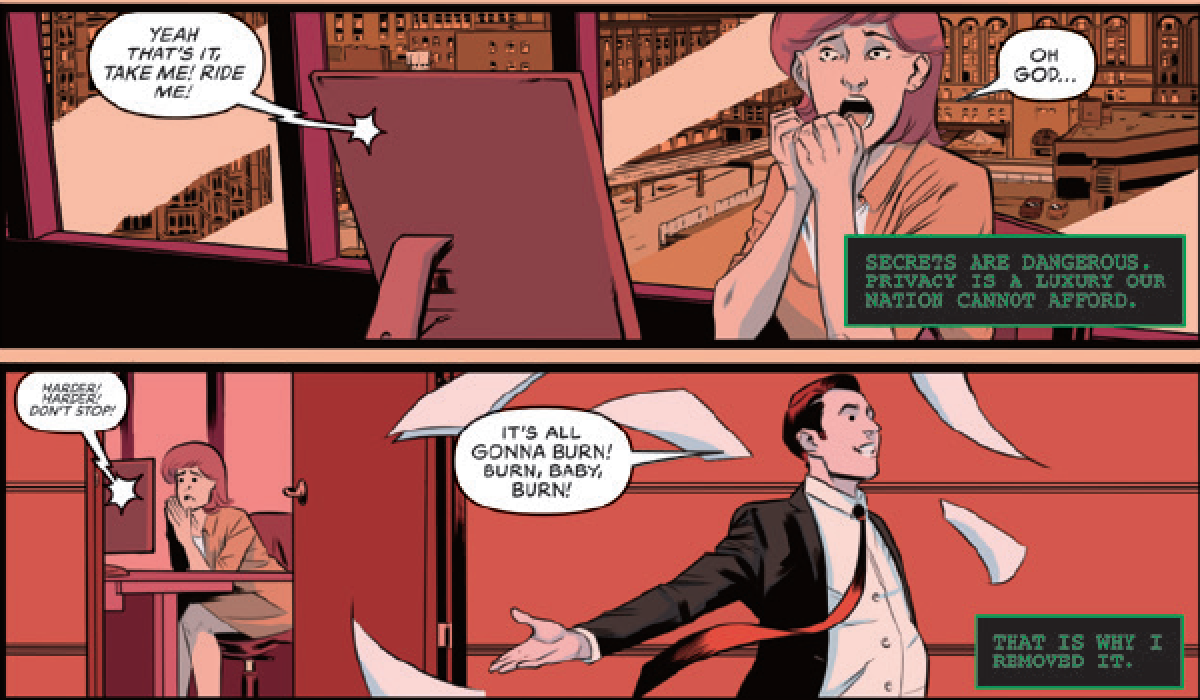 “No More Secrets” is a perfect example of pacing and escalation. It takes a simple sci-fi premise (what if everyone’s secrets were revealed all at once?) and shows the chaos that would ensue, starting with ordinary people and ending with the President of the United States. Quite literally, we start inside a coffee shop at ground level, then move up to an office building, then to Air Force One, and then finally out into space as we watch the planet destroy itself. The orange-tinged coloring of the outdoors (once again by Greg Menzie) subtly hints at the apocalyptic explosions to come. This story has a scary premise, one that works best when you don’t think about it too hard because the fun of this story comes from its repercussions, not its explanation. A simple idea with terrific execution. 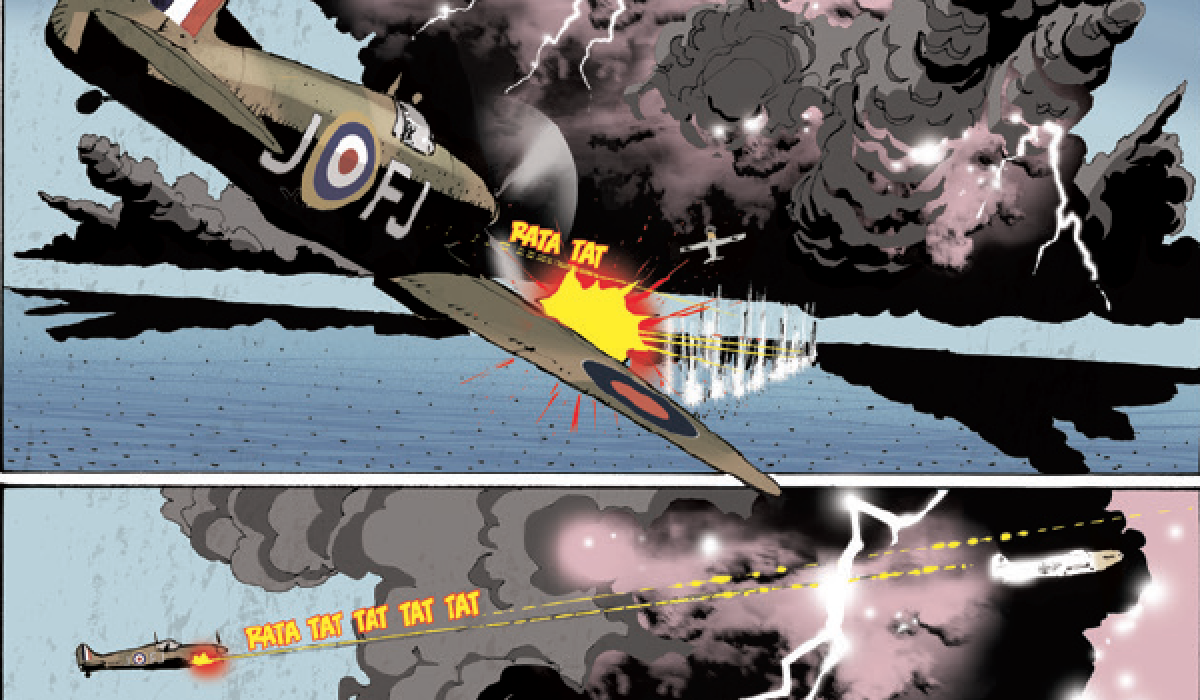 Like with “Vita Extensum”, the artwork for Adventures in Science‘s final story immediately caught my attention. The pilots and their cockpits are fairly photorealistic, but the alien world they enter through some mysterious clouds is anything but. Geoff Senior‘s detail is a marvel to look at, displayed best in the massive panel that reveals the alien world. Dozens of sci-fi ships are flying about and shooting at each other, all while two opposing pilots from World War II are trying to make it back to their world. The action is exciting and energetic, thrilling the reader with explosions and firefights that leap off the page. The brief, one-panel glimpse of inside an alien cockpit is a great tease. Will the pilots make it back to our world? And once they do, does their conflict still matter after the alien war they had to survive? These questions are more than enough for this anthology to end with a bang.

Overall, Adventures in Science is a great read. Keep in mind, I covered less than half of the stories in this book in my review here- there is so much more to explore! You can find its Kickstarter page here and the website of its publisher, Dead Canary Comics, here!

Are you looking to have some Adventures in Science? What stories sounded interesting to you? Sound off in the comments or send us your thoughts on Facebook or Twitter!