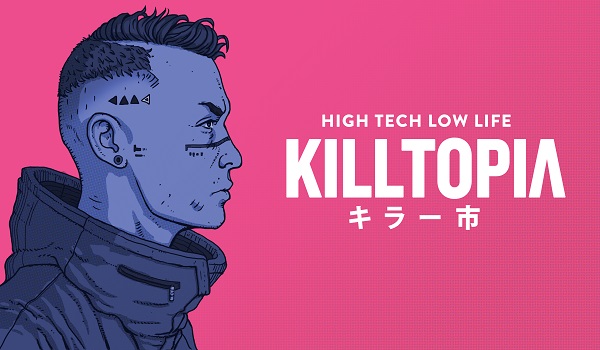 Comics galore! That’s what I’ve been saying to myself for the past thirty some odd years, but it’s especially what I’ve been saying to myself for the past month or so because there are just so many great comics hitting the Kickstarter circuit right now. Take for example Killtopia: a book that takes place in a dystopian future where killer robots are hunted by assassins known as Wreckers. Gee guys, if we’re not careful this could become real. I personally do not trust my computer one bit and I urge you all to vet your computers thoroughly (weekly exams and all), but that’s beside the point. We recently had a chance to speak to David Cook, writer and creator of Killtopia, and we’ve gone ahead and compiled our questions and his answers into this handy, readable “interview.” What are we waiting for? Let’s go!

AP2HYC: Give our readers a bit about your background in comics.

Cook: I started my writing career as a video game journalist, jetting off to press events to interview the likes of Hideo Kojima, Sonic creator Yuki Naka, BioShock director Ken Levine, and a host of top names. After getting tired of the game circuit I wanted to write something more creative, which led me to comics. I started out with a short comic story about a cage fighter who fell in deep with the mob which later became our first series, the post apocalyptic road trip saga Bust.  We’ve done two more series since then – Vessels and Feather – but for me it all began with my journalism.

The first comic series that hit a tangible note with me was Transmetropolitan by Warren Ellis, largely because it’s about journalism and I was a journalism student at university at the time. To me it’s still the best series ever written, and it definitely put me on the path. I’d say though, given my background, that games have more of an influence on my comics than actual comics (as controversial as that may sound!).

AP2HYC: What is Killtopia about?

Cook: Killtopia is Blade Runner meets Battle Royale for the video game generation. It’s about a mega city in Japan that’s being overrun and terraformed by a plague of killer robots. The government, corporations and Yakuza pay assassins called Wreckers to enter the infected zone and thin out the herd in exchange for money, fame and glory.

Ground zero is Sector K, now known as Killtopia, and it’s where our hero [Shinji] hunts robots to pay for his dying sister’s medical care. She’s got a fatal nano disease, which is basically millions of microscopic robots terraforming her from the inside. The price of her medication keeps rising and times are tough for Shinji. That is, until he meets the world’s first thinking, feeling robot called Crash, who has the power to cure the Rot. The pair team up and become wanted fugitives hunted by every Wrecker, gangster and low life in the city. It all gets a bit nuts and spoiler heavy from there.

AP2HYC: What were some of the inspirations behind the story?

AP2HYC: Crash is the first known sentient robot. Without giving too much away, what kind of personality does Crash have?

Cook: At first he’s a naive guy, like a kid who just learned to talk. He essentially downloads our language and syntax off the ‘net, so his parlance and the way he talks is really janky, leading to some dark comedy moments. But over time he starts to understand human nature and as his understanding grows, he may or may not like what he finds. Overall we’re a pretty shitty species to be fair. A lot of people want to use Crash for their own selfish means, and there’s only so much of that a person can take.

AP2HYC: Is this your first time using a crowdfunding platform to publish a comic?

Cook: We’ve successfully crowdfunded every comic we’ve made, so this is our sixth success, which is just crazy! It’s a format we love because it connects us directly with our readers and helps us to find new fans. I enjoy the transparency it brings; letting people get to know us and to see the project unfold in real time. 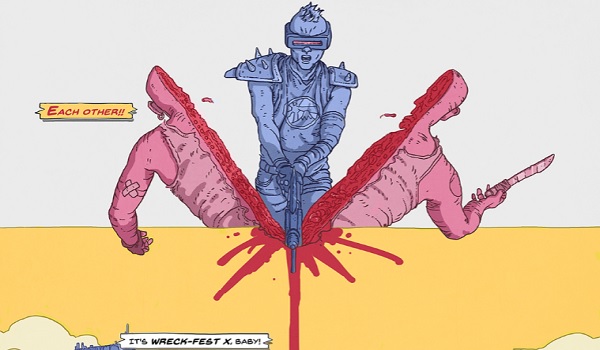 AP2HYC: What kinds of rewards are being offered on the Kickstarter campaign?

Cook: We’ve got the physical book, branded USB sticks with tons of behind the scenes content and a look at Killtopia #2, t-shirts, stickers, prints, an official soundtrack and the crown jewel – a custom print by artist Craig Paton.

AP2HYC: Having a soundtrack for a comic is very interesting. How did that come about?

Cook: We wanted to use some original music for our Kickstarter video so Craig enlisted his friend Suz Gibson to make us a brilliant cyberpunk synth track for that, and when we got funded in a crazy short time (less than 12 hours!) we wanted to expand to a full soundtrack. Every backer will now get this free of charge as it’s our first stretch goal. Watch this space!

AP2HYC: What does the future hold for Killtopia?

Cook: The first draft of issue 2 is almost complete, and it’ll go through a few months of rewrites until it’s done. What I do in my books is center them around a trope or theme – in this case the city’s Killtopia zone – and then expand the world around it. So in issue 2 you’ll barely see Killtopia itself, but its influence on the world will always be felt. Instead, the issue will take readers on a wild trip through future cyberspace, a VR realm where anything is possible. We also plan to take readers to the city’s lower levels, where the worst of humanity dwell. I’m a big fan of world-building so you’ll see many corners of the city over time.

AP2HYC: You seem to spend a lot of time in arcades. Any all time favorite games?

Cook: Lots but I’m sad so I rank them a lot (hah!). My favorites are without a doubt Streets if Rage 2 (spot the reference to that in issue #1), Dark Souls, Bayonetta, Resident Evil 4 and No More Heroes to name a few.

AP2HYC: What are some of your favorite comics, books and movies?

Cook: Transmetropolitan holds the comic crown for me, closely followed by two Rick Remender projects – the mind blowingly good Low and Tokyo Ghost. Seriously, you need to read them both! Movies, I’d say my favorite is Old Boy, followed by Fight Club, Die Hard and the Arnold Schwarzenegger masterpiece Commando.

To grab your own copy of Killtopia, head on over to the official Kickstarter campaign and donate some of that money that’s been burning a hole in your pocket. Now’s a great time since there are all kinds of cool unlocked stretch goals!

Once you’ve done that, let us know what you think in the comments section below or send us your thoughts on Facebook or Twitter!