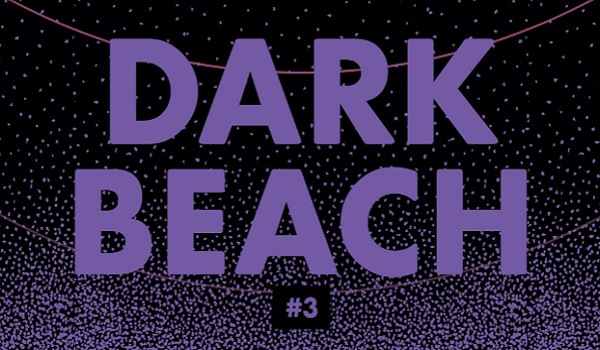 Welcome to another comic book review! Yes it’s true, these past few weeks those of us living on the northeastern coast of the United States have been getting slammed with “winter weather,” (what else would it be called?) and so, we are pleased to take a trip to fabulous Dark Beach for a nice well deserved break from the snow. Now, I- what’s this? Dark Beach isn’t pleasant you say? My stars! Well then, I think this calls for some investigation. Let us now take a look at the newest entry into the series, Dark Beach #3!

First things first: what exactly is Dark Beach? I’m glad I asked. And, uh, that you asked as well. Ehem. Welcome to New Reykjavik. In 2355, New Reykjavik uses geo-thermal power to emulate the power of the sun and its citizens are protected by a giant shield that reaches across the entire city. The “Old Sun” was previously considered to be too dangerous for life on Earth and has since vanished. In the wake of the sun’s disappearance and the construction of New Reykjavik, “sun freaks” indulge at “sun clubs” to get their artificial fix of the Old Sun. More information about previous installments can be found here, in our review of issues one and two.

Once again, we meet good old Gordo, still tripping on Ghost Choker and scouring the city for crime scene photographs to keep his addiction in check. Gordo has a target on his back ever since he began investigating the murder of “sun freak” Ket and it seems like he has perturbed the wrong people. What connection might these nefarious individuals have with the Old Sun? 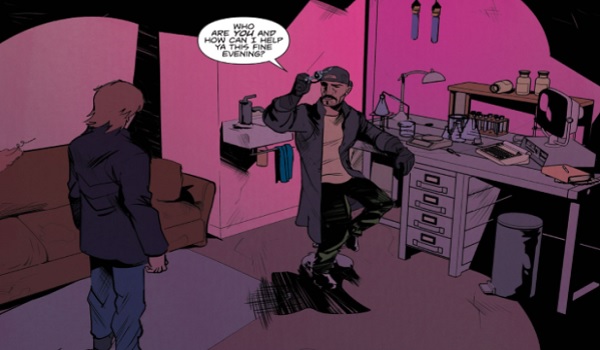 Issue #3 deals with Gordo’s continuing investigation into Ket’s murder. We get a flashback scene that provides more detail about the relationship between Gordo and Duke, who is the proprietor of a newspaper called The Observer. In exchange for crime scene photographs, Duke provide Gordo with that sweet (and dangerously illegal; do not attempt) Ghost Choker, which helps keep Gordo’s visions of the Old Sun at bay.

Anyway, once we are back in the present, Gordo invites himself into Duke’s apartment looking for his fix. Only this time Duke is not as willing to share as he usually is. This causes Gordo to complain about how he needs to get high so badly, so Duke relents and provides Gordo with the name of his drug contact, Renji Obsolade. Care to hazard a guess as to what happens next? If you said Gordo consumes alcohol and purchases drugs from Renji, you are correct! Oh, and he also calls himself an “astronomer,” which I suppose is not totally inaccurate considering his obsession with the Old Sun.

The scene between Gordo and Renji is one of the highlights of this issue. Despite Renji’s chosen profession, he comes off as a pretty decent guy (pretty decent) and offers some insightful thoughts on peoples’ perspectives of the Old Sun and the old world. Was it truly a paradise? Were people not at war with one another? Did people not wish to escape from their troubles by way of chemical distraction? One must not look at the past as if it were some sort of treasure lost to time, especially if they were not there to truly experience it. What matters most is making the best of the present and where we are today and that is exactly what Renji was driving at. Cool stuff. 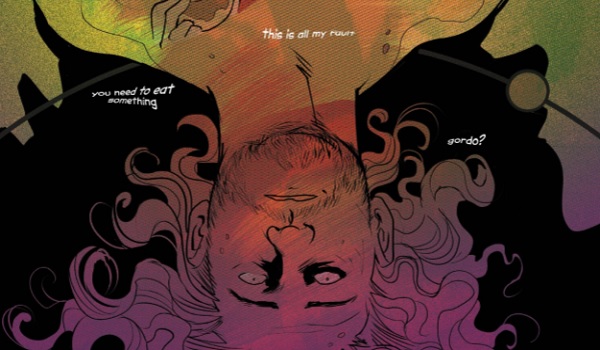 After getting high as a kite, Gordo wakes up to find himself in a bathtub (who hasn’t?) and is greeted by none other than Lilith Junge, who invites Gordo to the Mayflower for some breakfast. All seems calm until suddenly Julyus busts into Gordo’s apartment in an attempt to silence (READ: kill) Gordo. Lilith runs off and instead of the whole killing and murder thing, Gordo and Julyus talk about the sun freaks and the NRCE, an organization that Gordo believes is behind the whole Old Sun cover-up. Somehow, Gordo is able to evade death and makes his way to the Bermuda, a boat at the old marina where he hopes to find more clues about Ket’s murder. The investigation hits a stand still at this point, when Gordo is confronted by a mysterious figure.

This is an excellent book. The script written by Michael J. Ruiz-Unger and Tucker Tota, is simply phenomenal. There is so much going on, from Ket’s murder to Gordo’s past, and the collision course he is on with the NRCE authorities. Gordo must continue his investigation while addled by drugs and alcohol and while on the run from a murder he did not commit. This book is seriously intense. The noir style of this book’s dialogue is perfectly captured in many scenes, like the Gordo/Renji exchange as well as the one between Gordo and Julyus. There are tons of mysteries to uncover and you’ll be hooked on this one, I guarantee it.

The artwork is great, handled by Sebastian Piriz (pencils and inks) and Ray Jones (colors). Again, the noir aesthetic is present, but the artwork also has this futuristic thing going on that compliments the noir feel very well. Piriz and Jones do a wonderful job of conveying tension when it is necessary, but also offer some absolutely beautiful work during scenes where Gordo is tripping out on Ghost Choker. Not that anyone should go and start taking hallucinogenic drugs…no, yeah…you shouldn’t do that. Not at all. But the scenes do look fantastic. Choose to live vicariously or indulge at your own peril.

I can easily recommend Dark Beach to fans of detective fiction, noir stories, and science fiction. It does contain a fair amount of content that would not be suitable for younger readers, so keep that in mind if you are either a) a younger reader, or b) a reader who also has a younger reader in close proximity to where you leave your comic books. You want more, right? Well then, you’re in luck! You can get your very own copy of Dark Beach #3 (along with some sweet rewards) by pledging to the Kickstarter campaign and back issues can be found at their official website!

Are you a sun freak? Do you need Dark Beach right now? Let us know what you think in the comments section below and our Facebook and Twitter pages!