The short version is that Pacific Rim Uprising is not as good as the original, though still tons of fun and definitely worth the watch. And, yes, Guillermo del Toro deserves those completely unrelated Oscars. The long version is that Pacific Rim was a beautiful and refreshing original sci-fi film. Taking del Toro’s love of Japanese giant monsters, giant robots, and the tokusatsu medium, the film was pure awesome. It also worked well for having a fleshed out cast and intricate world building to boot. It built up its narrative and answered all of its questions rather than just leaving them to the side as teasers for future sequels. I am looking at you The Amazing Spider-Man. No, I will not let that go!

Several years on, the sequel lacks del Toro in the director’s chair and instead has Steven S. DeKnight who has had a pretty good TV career (Spartacus, Daredevil, Buffy, etc.) Pacific Rim Uprising had a bumpy production, nearly getting shelved indefinitely due to studio head-butting, but was saved by the purchase of Legendary Pictures by the Chinese Wanda Group. As such, the film was mostly filmed and set in China and has several prominent Chinese actors in major roles. Uprising carries on the fun and adventurous spirit of the first film, but doesn’t have quite the same level of storytelling that del Toro had perfected. Most of its success comes from the forever awesome fights between the Jaegers and Kaiju. 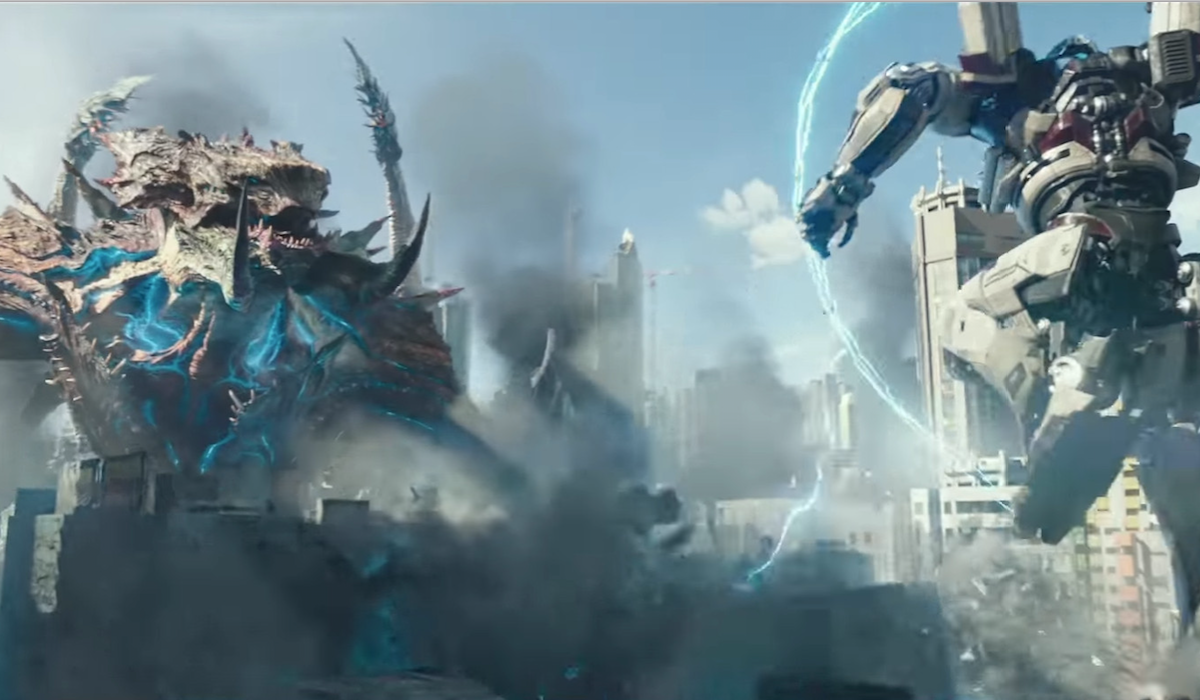 For the uninitiated – where have you been? – Pacific Rim Uprising continues the story of the original. In the first film, an alien portal opened up in the Pacific Ocean, unleashing giant monsters upon coastal cities around the world. In response, mankind built Jaegers, enormous battle robots, that require two pilots to mind meld to share the mental strain of controlling them. As you might have guessed, mankind was victorious, the portal was sealed, and the world saved.

Uprising takes place ten years later, with the refreshing knowledge that mankind anticipated and prepared for the Kaiju’s return. While piloted Jaegers are still the main frontline forces, there are plans to swap them out for remote-controlled “drone” Jaegers built by businesswoman Liwen Shao (Jing Tian) and Dr. Newton Geiszler (Charlie Day). I thought using unmanned drones was the logical next step, but did they forget about that one Kaiju who had an in-built EMP blast that knocked out all of the digitally-powered Jaegers? I guess the screenwriters did. Quietly opposing the drone initiative is Mako Mori (Rinko Kikuchi), who now runs the Jaeger program, who is training the next generation of pilots. Dr. Herman Gottlieb (Burn Gorman) is also back, now working on installing rocket boosters into Jaegers.

Our new hero is Jake Pentecost (John Boyega), the estranged son of the late war hero Marshal Pentecost (Idris Elba). Boyega’s character is retroactively inserted into the mythos, since Pentecost never once mentioned having children. Luckily, the character is charming enough, even if his character arc is mostly hushed. He lives his life stealing disused Jaeger equipment and selling it on the black market. That all changes when he runs into a young Jaeger-building prodigy named Amara Namani (Cailee Spaeny) who has built her own smaller-sized robot named Scrapper. I’m not entirely sure how she can pilot her Jaeger alone considering the established rules of Jaeger-piloting. Maybe it is about the size? 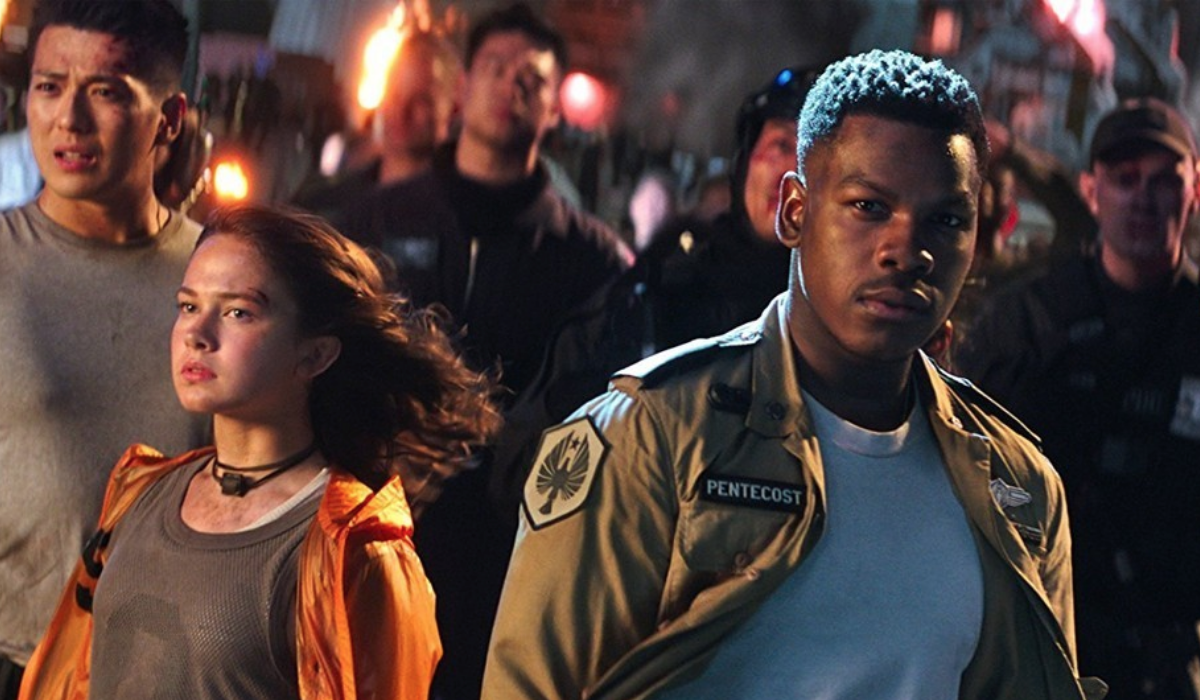 Both end up getting arrested by Mako’s forces and are inserted into the next generation of Jaeger pilots. We learn Jake is a washed up pilot, but it is underplayed and not really brought up as a negative. I suppose because it is similar to Charlie Hunnam’s character Raleigh from the first film. Speaking of whom, where is Raleigh ten years on? Aside from a name drop, we never know what happened to him. What’s he doing, and whatever happened to his relationship with Mako? Jake just settles back into being a soldier, and any resentment from his comrades vanishes after a couple of scenes. Scott Eastwood shows up as Nate Lambert, the commander of the next generation of pilots. Thankfully, he isn’t a generic jerk. He portrays a good leader and his character’s relationship with Jake is quickly resolved.

Amara meets the seven other new recruits, but we don’t really have time to get to know them as people. You’ve got the nice guy, the nervous guy, and the ice queen who resents Amara for her free pass into the program. Cailee Spaeny is probably the highlight of the acting outside of the returnees from the first film. Her character is very spirited and tough, but hides a fragile side behind closed doors. Sadly, Mako is only around for a little while, so you can guess what happens to her.

The film also deals with the consequences of the last film. All that mind melding (or drifting) with the Kaiju has taken its toll on Herman and Newton, which comes to have a darker impact on both them and the plot. I also love that the world just didn’t dumbly think that the threat was over. We know the Kaiju are going to return, but it is how that took me by surprise. I won’t say how, but it does involve a malevolent Jaeger that storms in to wreck things at the end of the first act, leading to quite the mystery to solve. 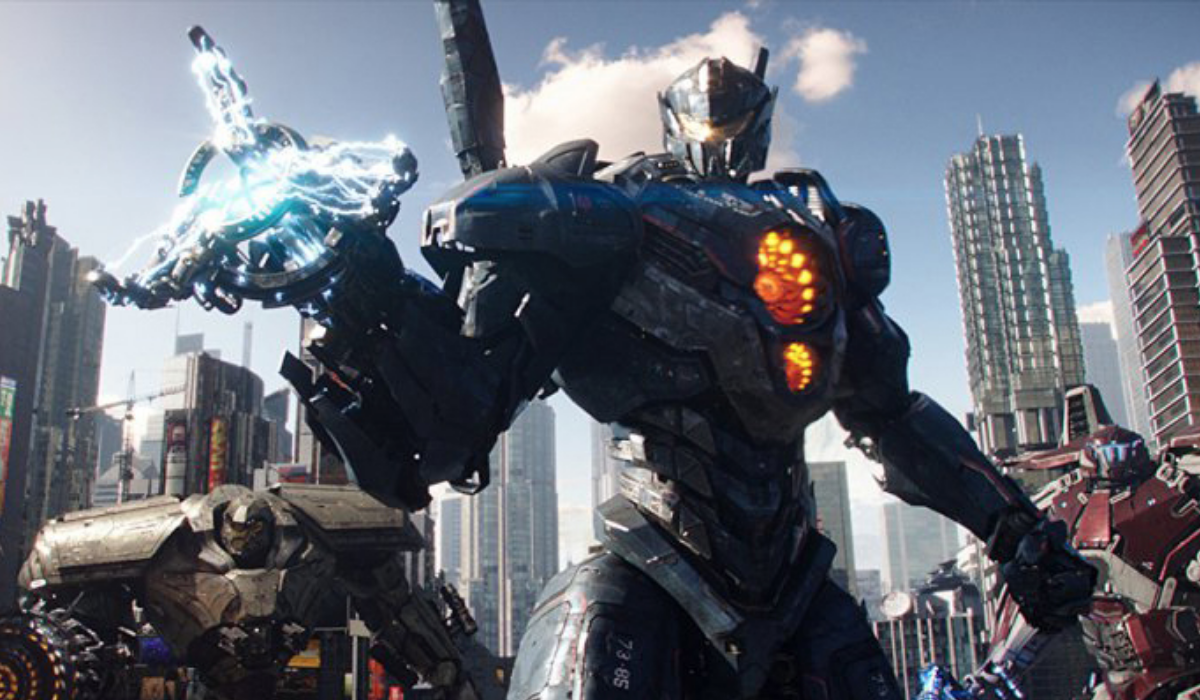 Uprising does take some liberties with the established canon. There’s the fact that Amara can pilot her smaller Jaeger alone without mental strain. The characters continue to bring up the idea that the Kaiju and their alien masters aren’t just invading to cause random destruction. This was asked and answered in the first film – they want to terraform Earth to use the resources for their own survival. Why is this now a mystery again? Perhaps because it wasn’t a major plot element in the original. It also recreates a few of the more iconic moments from its predecessor, like a Pentecost delivering a moving speech (though it is played with). Amara’s backstory is basically the same as Mako’s, and she even forms a bond with Jake as a big brother figure.

Still, the whole highlight of the movie is when the robots and monsters are duking it out. It makes up a bit for the highly underrated Power Rangers’ tease of holding the big brawl back to the last twenty minutes (but with good reason). The action between the multi-armed Jaegers and the rampaging Kaiju is so much fun to watch, allowing the VFX wizards to go to town.

I was even more thrilled when the big finale takes place in Tokyo. Certain shots looked like they were taken straight out of a Godzilla film. I also liked the little cameo of the “Odaiba Gundam” statue, since this whole film takes inspiration from Japan’s craze for giant mecha. The new Jaeger all have their own individual designs and weapons. These things would make great toys. The Kaiju aren’t as creatively menacing as last time, though that opinion is immediately silenced when the final boss is created. 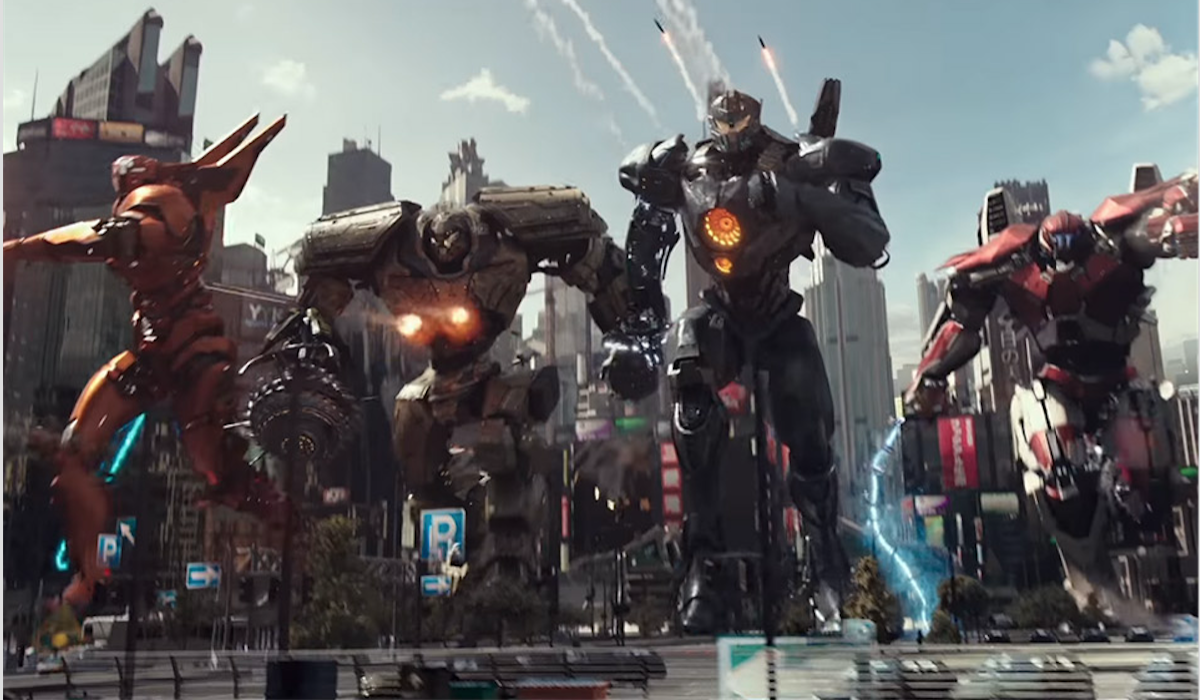 Pacific Rim Uprising manages to hold itself together through its fun appeal, even if the storytelling is a little predictable at times, and most of new characters are underdeveloped. There are talks of turning this thing into a new major film franchise. I say the more the merrier, but just don’t sell out the soul of this series to make some money.