Home » What a Long, Strange Trip It’s Been In Midnight Man Volumes 1 & 2 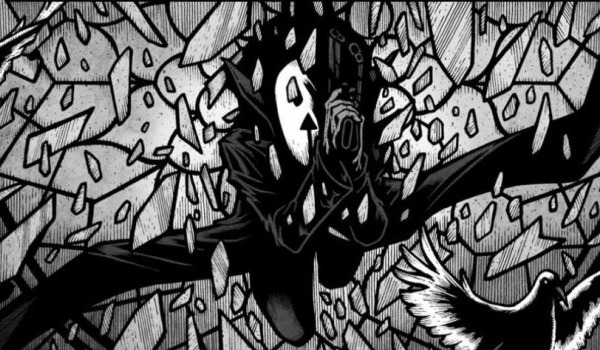 When the clock strikes midnight, brace yourself for an onslaught of manic energy and punchy one-liners. The Midnight Man, a graphic novel written by Mo Ali and designed by Andy Bloor, returns with aplomb in its most recent adventure through time and space. Midnight Man Volumes 1 & 2 prove to be strange but wonderfully wild journeys.

The Midnight Man saga follows the exploits of, you guessed it, the Midnight Man. He’s a gun-wielding, time-traveling vigilante on a mission to save humanity. One minute he could literally be chasing the dragon, the next jetting through space in Big Ben to meet his polar opposite for tea. Wherever his adventures plant him, Midnight Man arms himself with a slew of jokes to face off against a sinister cabal lurking in shadowy voice-overs.

The ability to leap through time and space might be Midnight Man’s mightiest weapon, but that pales in comparison to the graphic novel’s need for speed. There’s a difference between the pace of both issues of Midnight Man, but they play well off of one another. In Volume 1 Bullet Time, the reader is immediately flung into action. The first issue does a great job keeping the energy and action bordering into manic territories and following it moment to moment. In contrast, Volume 2 Gunspace slows down and delves deeper into Midnight Man’s mythos and who exactly he’s fighting and why he’s doing it. The differing paces between each issue ultimately works towards Midnight Man’s advantage.

The artwork for Midnight Man is what really pulls everything together. If a reader leaves this series with one thought, it’s that Bloor really loves a straight line. The designs in each issue are clean and uniformed. The nature of the story also allows for creativity freely flow into each panel. The landscapes are visually interesting. Midnight Man’s universe stretches beyond the scope of time and space itself. Thankfully, Ali and Bloor have imaginations that are expansive.

Additionally, many of the creative choices are quite clever. I won’t spoil the ending of Gunspace, but how this evil organisation keeps tabs on Midnight man is funny and a big abstract wink to readers. If I do have one complaint, it’s that Midnight Man himself can sometimes come off as grating. When he first started quipping, I immediately thought of Deadpool rather than thinking of Midnight Man as his own original being. More damning than that though is all of his jokes rely either on time puns or topical pop-culture references. Because this character bounces from time periods, there are missed opportunities. He could have made historical references only he understands. Even better, the bizarre creatures he encounters could have no idea what he’s talking about. As is, they don’t really react at all. Overall, Midnight Man is a weird, yet fun romp through time and space.

Have you stopped and read Midnight Man? Take a ride on the Midnight Man express and find out for yourself. If so, fast forward to sending your comments below or send us your thoughts on Facebook or Twitter!