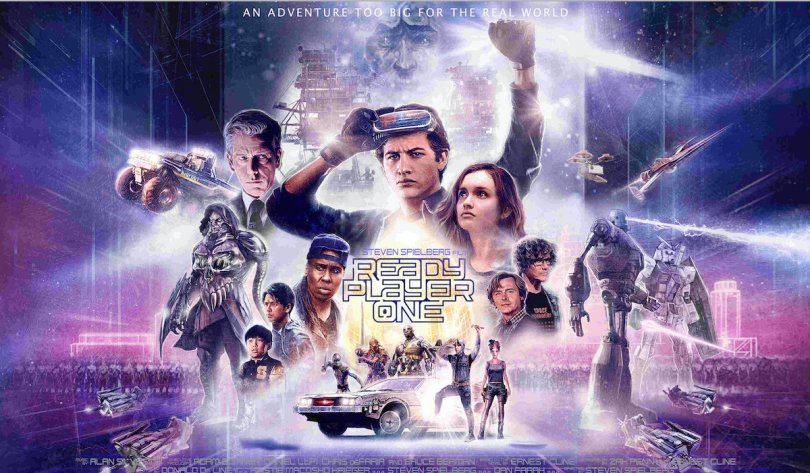 Ready Player One is a blockbuster that offers audiences a virtual world where the limits of reality are only bound by one’s own imagination. In this world, nostalgia thrives and is something to be proud of. One’s knowledge of pointless movie trivia is now their key to becoming rich and powerful. All that is essentially what this film is: a wish fulfilment fantasy for every proud nerd and enthusiast who knows the name of the school from The Breakfast Club or the registry number of Star Trek‘s USS Enterprise. We have all dreamt, at one time or another, of such a world where this trivial knowledge could let us be stars in the public eye. Ready Player One is the type of film where eager viewers will watch frame-per-frame to look high and low for Easter eggs and cameos. It shares this quality with films like Wreck It Ralph and Who Framed Roger Rabbit, but does not quite succeed as they do when it comes to its original storytelling.

The film is based on the best selling 2011 book by Ernest Cline, a man who clearly looks back fondly on his childhood- he even owns a personalised replica of Doc Brown’s DeLorean! I have never read Ready Player One, and may not. From reviews I have read, it sounds a bit self-pandering, the main character is a bit of a creep, and the pop culture references are explained in long drawn out detail. No offence to Cline’s writing talents of course, it just does not look like my kind of book. Many said after news first broke of the novel’s upcoming movie adaptation that the book was simply unfilmmable. But, when you have Steven Spielberg in the director’s chair, anything is possible.

It is fitting that Spielberg directed the film. Much of his acclaimed early work was based on his nostalgia for classic films and now, decades later, Spielberg’s own movies have become nostalgic for so many. (He did, after all, invent the summer blockbuster with Jaws.) Now, here he is directing what could be called “Nostalgia Trip the Movie”, but instead instead of being a lifeless cash grab like Pixels, Ready Player One ties in the elements it has borrowed from the past to its own plot and characters.

Disclaimer: This review does contain spoilers for the film and possibly the book 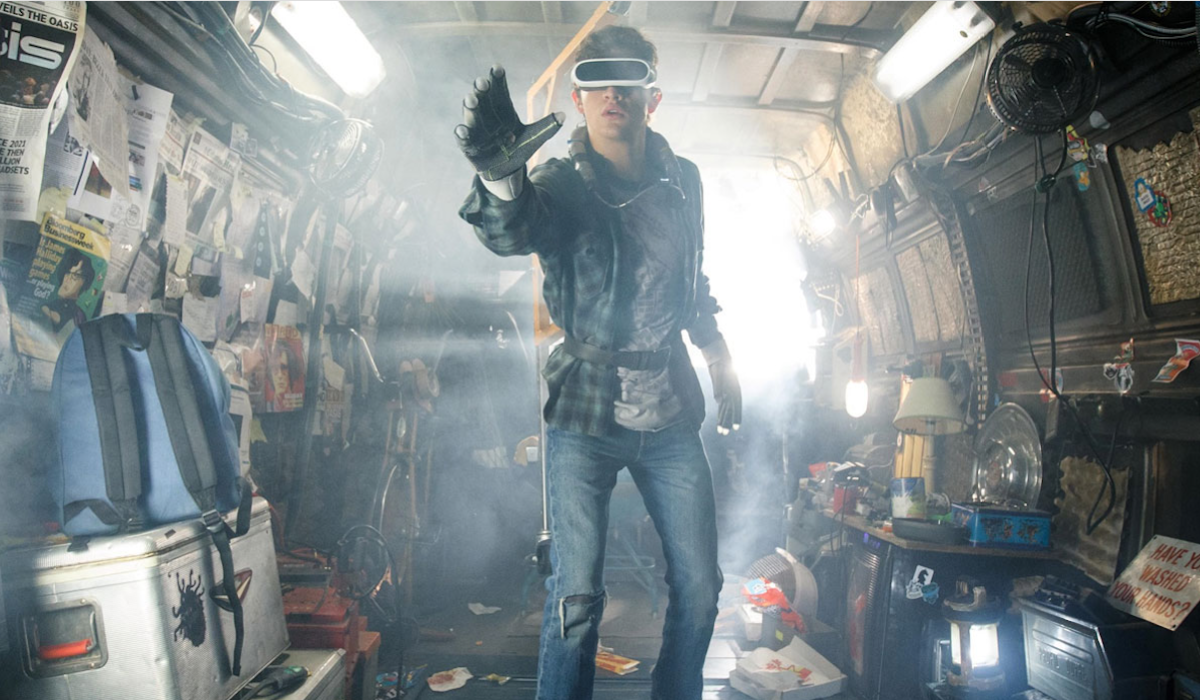 The story is set in 2045: the world sucks, most Americans live in cramped “tower blocks” of caravans called the Stacks, and escape their harsh world by visiting an enormous VR realm called OASIS where they can be whoever they want. Nostalgia is a big deal in the OASIS, mainly because a vast amount of the pop culture praised in the VR-net was beloved by its creator, James “Anorak” Halliday (Mark Rylance). Halliday passed away a few years before the film, leaving one hell of a last request. He explains he has left an easter egg within the OASIS, that will grant its finder ownership of the whole virtual reality empire. To find the easter egg, one must locate and accomplish three puzzles, earning three keys. People have gone nuts trying to find the clues to unlocking the puzzles, but five years on, no one has won even the first challenge.

Our protagonist is Wade “Parzival” Watts (Tye Sheridan), an American teenager who lives in the “stacks” with his aunt and her sleazy boyfriend. He is more attached to OASIS’ fantasy realm than to his real life, and as such, views his life as an dream-like extension of the game. Wade is completely committed to solving Halliday’s challenge and often lists all the trivia facts he knows about his idol’s favourite things. Mostly as his online avatar, Parzival, Wade serves as an average protagonist, thanks in part to the removal of his book counterpart’s less noble traits. His character arc is basic, yet you still root for him to beat out the film’s antagonists to protect the world he lives in. Wade and the other challenge chasers are known as “Gunters” (an abbreviation of “egg hunters”). He also has an internet crush on Artemis (Olivia Cooke), a dedicated Gunter, whose reasons for seeking the easter egg are deeply personal.

Parzival and his friends Aech (Lena Waithe), and Japanese brothers Daito and Sho (Win Morisaki and Philip Zhao), have their own projects and hobbies, though they are primarily dedicated to the hunt. Opposing the Gunters are the “Sixers”, players hired by IOI (Innovation Online Industries), your stereotypical evil corporation who basically wants to destroy the OASIS’ net neutrality with advertising and tiers. The company is led by Nolan Sorrento (Ben Mendelsohn), who is unfortunately as generic a corporate villain as you can get. Sorrento, who had an antagonistic past with Halliday, only regards the OASIS as an excuse to make money and does not understand the cultural nostalgia. There are some traces of a deeper character too him, but it is underplayed. He is also aided by the selfish, wisecracking player i-R0k (T.J. Miller). 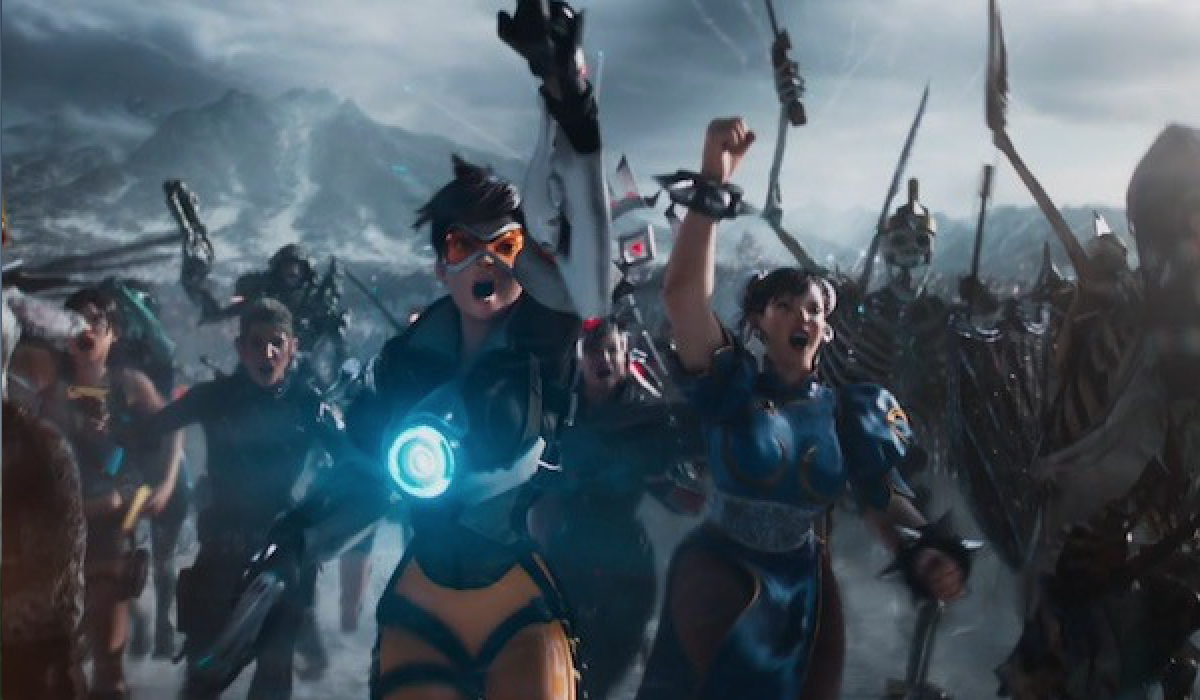 The film truly kicks off when Wade figures out the first challenge – an action packed race course through a series of impossible obstacles (including Rexy and King Kong). But, I can’t quite believe that in five years, with thousands of people dedicated to analysing Halliday’s past and the layout of the game, not one person thought about driving backwards!? In a racing game? Really? Wade soon finds himself in hot water as Sorrento begins to target him. He find himself dragged into the “rebellion” against IOI’s influence, meeting Artemis and his other friends in the real world. With these opposing factions established, the race is on to find the remaining keys.

Halliday himself is an interesting character, a mix of Willy Wonka and John Hammond. His puzzles are not just a mix of favourite films, games, and references, but have deeper meanings to his life and mindset. Rylance portrays Halliday as an awkward, difficult, and withdrawn man who struggled to stay in touch with reality. He left his mark in life with OASIS, where Halliday was more alive than he was in his real life. His detachment led to the firing of his business partner Ogden Morrow (Simon Pegg) who would go on to marry the woman that Halliday loved. His backstory makes his three big challenges a bit more heartfelt so that we can connect with them on a deeper level than just noticing all the references.

Even though Spielberg’s familiar charm and knack for storytelling is present, it is mostly pushed to the side in favour of the film’s rampant fun. Ready Player One is a visually beautiful film that knows how to show off the vastness of its world and the many familiar faces within it. Just about every iconic character that is not owned by Disney or Nintendo makes an appearance in the film. (We do get a passing mention of the Millennium Falcon, but I guess using Star Wars references cost a lot of money, even for Spielberg.) Blink and you may miss cameos from the Battletoads, Duke Nukem, Hello Kitty, Robocop, Chun-Li, Sonic, and more, while characters like the Iron Giant play more prominent roles in the story. And, of course, as a Warner Bros. release, expect to see many tributes and references to various Warner Bros. properties and long-term franchises. 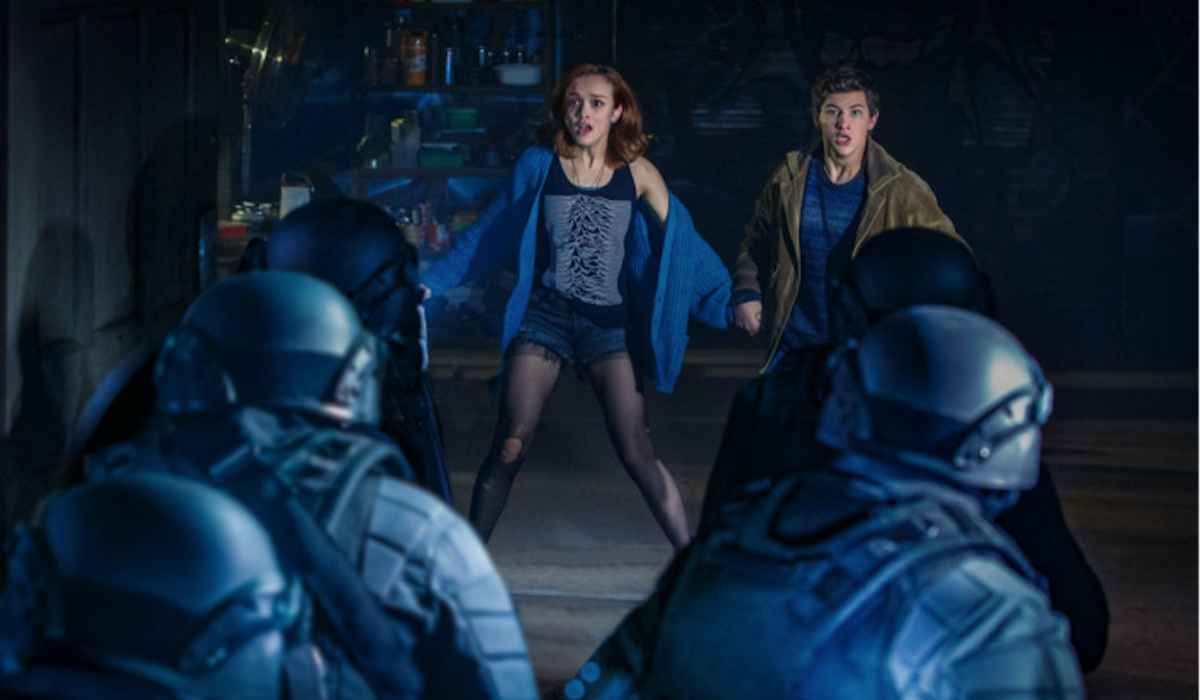 Putting all the visuals and references aside, the story of Ready Player One is not all that original. Its characters are underdeveloped and several important real world elements stuffed in uninteresting dialogue. Wade especially is a troubling character, who reacts more emotionally to moments in the OASIS than to the murder of his family. His ever-growing disassociation from real life does mirror Halliday’s, but while Halliday wanted to improve his life but did not know how to, Wade ignores his family life simply to live out his fantasies. Seriously, when he wins the first challenge and gets tons of money, not once does he consider helping out his impoverished family (even after his aunt’s boyfriend lost all their money in the OASIS himself.)

The romance between Wade and Artemis is quite clichéd. Artemis’ personal reasons for playing and Wade’s wish fulfillment to date a manic pixie dream girl cause quite the conflict between them. But, once they meet in reality, this palpable tension vanishes. Did they forget a couple of scenes where Wade realizes that his real life is more fragile than his virtual one? This development is nowhere to be found.

There are also a number of unanswered questions about OASIS itself. In the VR world, you only have one life. If you die in-game, then whatever loot and money you have gained is lost (think Sonic losing all his rings.) This apparently impacts a person’s real life savings too, as in the case of Wade’s family. So, if a person owns property, money, or maybe even a business in the virtual world, and they lose their “life” there, then they lose everything connected to the real world as well. What kind of system could ever financially succeed if this sort of restriction was included? 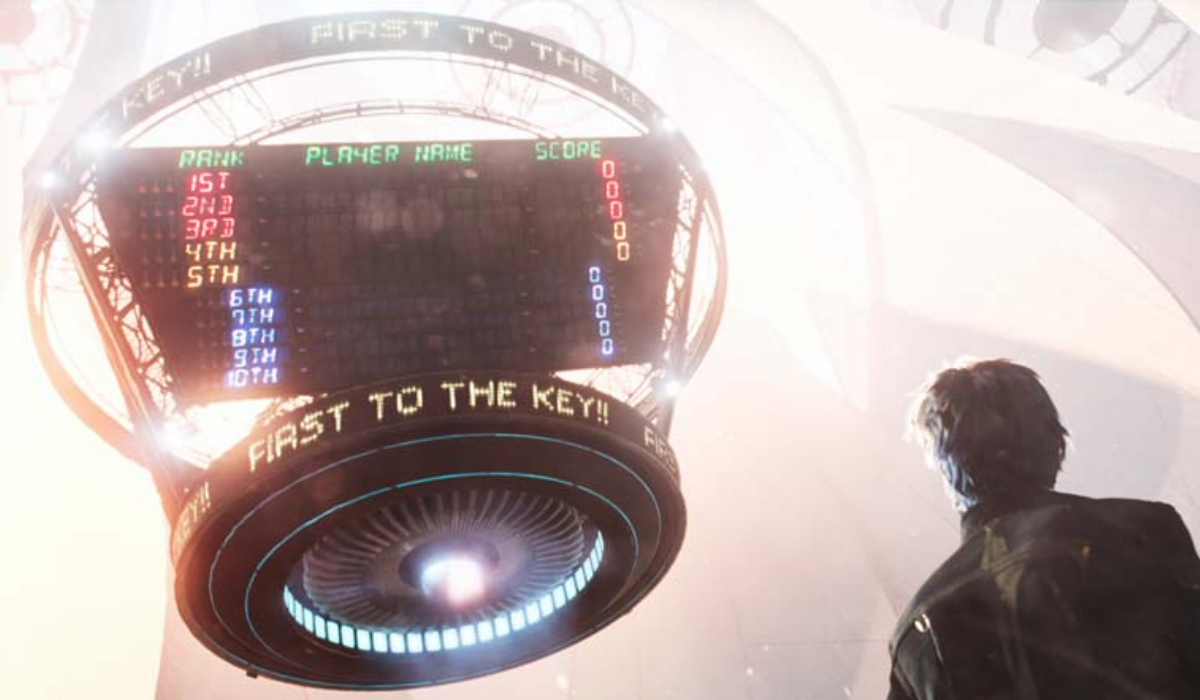 All in all, Ready Player One is a fun movie. On the surface, it is rich with great visuals, plenty of easter eggs, and an epic sense of scale and scope. However, it suffers from a ton of clichés, although repeated viewings may help an audience discover that the story has a deeper meaning to it. It may not be Spielberg’s best picture, but it certainly is a joy to watch.