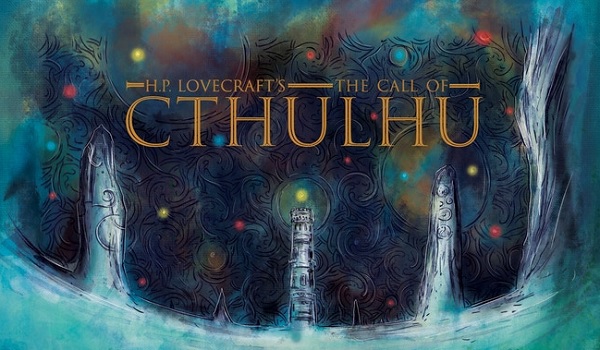 Some say he sleeps in the darkest depths of the ocean, lying in wait. He is a malevolent force that is pure, unknowable evil and destruction. He’s surely won this writer’s heart and he’s about to win yours. Who is he? None other than Cthulhu, The Great Dreamer, of course! And now he’s available in a full color concertina book! That’s right friends, Lyndon White has put together an adaptation of The Call of Cthulhu in a fun and unique format, and we’re embarking on a quest to learn more about it. And by quest, I mean an interview! Keep reading to find out what Lyndon has to say!

White: I’m an illustrator and comic artist based in the UK. I freelance full time and the majority of my work is comics and publishing based. I’ve recently been working on a string of horror themed books which you might have seen on the comic con circuit the past year or so.

AP2HYC: Can you provide a description of what a concertina book is for our readers?

White: Concertina books (also known as accordion books) are fold out art books that tell a story through a series of single illustrations. You can read them like a normal book or fold them out and display them as a piece of artwork. They are a bit of a unique book format as you are limited to telling a story within 10 illustrations, rather than using panels and speech bubbles like traditional comics.

AP2HYC: How did you get into the Cthulhu mythos? What was your first exposure to it?

White: I spend a lot of time traveling which means a lot of reading on the train. I’d bought a collection of short H.P. Lovecraft stories that I would read on train platforms, in between meetings or when taking a break while I was away from home. I’d bought the book purely on people recommending Lovecraft’s work. So I’d read snippets or short stories and before I knew it I’d read the whole book and went out finding more. One of the first stories I read was “The Call of Cthulhu” which stuck with me and brought me into the mythos Lovecraft created.

AP2HYC: For this book, which story are you telling?

White: I’m adapting The Call of Cthulhu based on the original text and staying true to it. Cthulhu as a character has been adapted multiple times by a range of people, but they tend to miss out on the actual story and instead just draw Cthulhu. The story is set around Francis reading through a series of documents that have been left to him by a dead professor. As he reads the documents he starts to uncover a mysterious cult and the worship of (not surprisingly) Cthulhu.

AP2HYC: Give us a little background on your creative process for this book.

White: Once I decided which Lovecraft story I was going to adapt, I first went back and re-read the story from start to finish. Making notes and listing key scenes as I made my way through the book. Once I had a full list I worked out my start, middle and end point to the story, which instantly narrowed down 3/10 pages of the book. I then worked out what happens between those points and filled in the gaps. Selecting the most important scenes to the narrative and making sure it told a complete story.

With all my scenes locked down I started sketching them out a set. Making sure they all work together and don’t repeat the same imagery or compositions. When the set was sketched out I then dud the final line work, inked them and took them to color. Since the illustrations need to sit beside each other I worked within the same color pallet so they all match as a set. 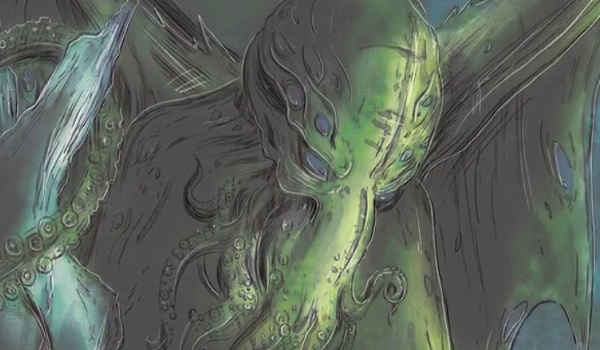 AP2HYC: What was your previous experience in using crowdfunding like?

White: I’ve used Kickstarter a number of times to fund comics, graphic novels and other concertinas (Bram Stoker’s Dracula). I think it’s an amazing platform to fund your projects if you do it right. I tend to finish all the artwork before I take it to Kickstarter so potential backers can see the product is finished and there’s little risk to them investing in it. It’s almost like a pre-ordering system but with a marketing push. It’s becoming more and more common to fund your projects and people are incredibly supportive. A number of my books wouldn’t exist in printed form if it wasn’t for Kickstarter. I’m really grateful for people buying my stuff and allowing me to fund my own projects.

AP2HYC: What are some of the rewards you are offering on the campaign?

White: There’s copies of the book, bundles which include the other concertinas I’ve made (Dracula and Dante’s Inferno), prints, giant posters, commissions, a whole bunch of stuff. I’ve kept it relatively simple so the overhead costs are low.

We are now into stretch goals so all backers get an A5 bookplate and their concertinas enclosed in an envelope with a custom made wax seal. It’s a little bonus and thank you to people for supporting the project.

AP2HYC: Stretch goal number 3 describes a one-shot comic inspired by classic horror stories. What kind of details can you provide us without giving too much away?

White: I want to avoid spoiling anything but if we get to that third stretch goal and I really hope we do, people can expect something that encapsulates everything people love about classic horror. It takes inspiration from things like Dante’s Inferno, Dorian Grey, Katabasis, The Signal-Man. So don’t expect a gore fest, but do expect a layered story where the humans can be just as monstrous as their antagonists. It’s a new story but there will be little references and nods to stories that people know and love. Yet, if you are new to horror or know nothing about any of the references, the story works on its own without it. It’s all written with a beginning, middle and end, so I know where it’s all going.

AP2HYC: What is your favorite H.P. Lovecraft story?

White: Typically, The Call of Cthulhu, hence the adaptation. I love the mystery and build up. I do really like Beyond the Wall of Sleep which is a lesser known one, but overall Cthulhu is my favourite. There’s a reason why it’s one of Lovecraft’s most iconic stories.

AP2HYC: What are some of your favorite comics, movies or books?

White: I utterly love Alexis Deacon‘s Geis From Nobrow. The art is amazing and the way he tells a a story is cinematic. Anyone who loves withes, fantasy and/or a bit of magic should check it out. I’m also part way through reading Pretty Deadly from Image Comics, which is a western. It can sometimes be a bit flowery but it all serves the story, while building up to some really cool action scenes.

Film wise, Studio Ghibli can do no wrong. Spirited Away, Howl’s Moving Castle and Grave of the Fireflies are my top three. On the completely other end of the spectrum, Mindhunter is a great watch over on Netflix. Yes, the name isn’t brilliant, but I was sold from the opening scene. It follows FBI agents as they attempt to catch serial killers, before we knew what serial killers were, while also developing a modern way of profiling them. Seriously, try the first five minutes and go from there. I’ll probably end up watching it all again before the second season comes out.

As for books, I’ve just finished the Dark Tower series. Seven books later it was a long journey, but one worth taking. The books switch genres quite a bit so there’s a lot of range. If it looks a bit daunting I’d recommend just trying the first book, The Gunslinger, which is the shortest book. You’ll get through it pretty quickly and have a satisfying ending to the first chapter. Aside from big series, read everything Neil Gaiman is putting out. You can’t go wrong.

By now I bet your mind is totally consumed by the awesome power of Cthulhu! Sanity is slipping away and you are no more than a mindless husk to do his bidding! No? Alright then, there is just one more thing for you to do: head on over to The Call of Cthulhu: Concertina Book‘s official Kickstarter campaign and pledge to get your copy today! All hail Cthulhu!