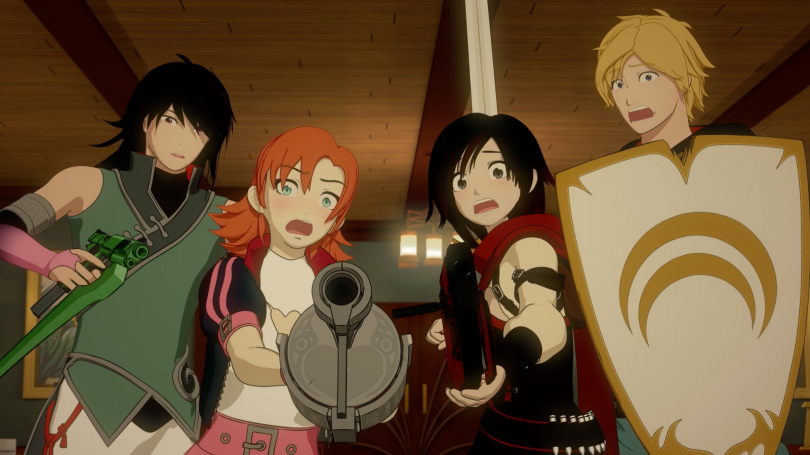 I have near-unanimous praise for RWBY, the kick ass web animated series released by Rooster Teeth. Amazing writing, characters, action, animation, and music, have always been staples of this fantastic series. Now into its fifth volume, RWBY excels in most of those categories. However, something felt off about this year’s volume. There was more plot that action, a lot of exposition, pacing problems, and ended on a finale that was both good but frustrating.

Disclaimer: The following review contains spoilers for RWBY Vol. 5 and all previous seasons. Read at your own risk, or just go binge watch the whole show!

The show, at first, was about young teenagers training to be Huntsmen at schools and slay the evil, monstrous Grimm. It has since expanded into a darker fantasy drama about magic, monsters, and a fight for humanity’s very will. It doesn’t feel like much of a stretch, considering how all of the characters have superpowers and multi-purpose weapons. Yet, everyone freaks out when one characters transforms into a bird. Volume Three broke the mould and our hearts, while Volume Four acted as a deliberate slow burn, dealing with the aftermath. Volume Five picks up the pace, guiding our various heroes down their respective paths to a long-anticipated reunion of Team RWBY.

This volume’s plot is built around our numerous heroes heading for Haven Academy. Ruby Rose, Team RNJR, and her uncle Qrow arrive first at the school, unaware that the headmaster, Leo Lionheart, is in league with Salem’s forces. Lionheart turns out be an irredeemable coward, so we don’t really get to know much about him beyond being a wuss. He doesn’t ever mention why he has turned traitor, beyond he finds Salem scary. I did expect a redemption arc to be set up for this character, but it never comes.

The team are joined by Oscar Pine, a young farmboy introduced last volume, who shares his body with the soul of Professor Ozpin. Long story. Anyway, Ozpin’s return allows for a lot of questions to be answered, but brings up a dark tone to Ozpin’s character. We learn he is an immortal soul who reincarnates in new hosts. Last time we saw him in the flesh, there was no sign of two souls in one body. So what happened to the last one, and what will become of Oscar? Ozpin has no problem hijacking control of Oscar’s body, and it becomes more common as the season goes on.

Elsewhere, a number of the characters converge on the tribe of Raven Branwen, mother of Ruby’s sister Yang Xiao Long. Weiss Schnee is taken captive by Raven, after fleeing her abusive home life in Atlas, but learns her older sister Winter, who she had hoped to find, has been called back home. Yang herself has had a rough couple of seasons, losing her arm and her self-confidence. Picking herself up and getting a robotic arm, Yang set out to find her mother, and then Ruby. There is a sense that she wants to confront her mother for abandoning her, but puts her focus on reaching her sister first.

Raven is a social Darwinist but strongly relies on a fight-or-flight reaction. Her entire character, motivations, distrust towards Ozpin, and reasons for abandoning her family, all come down to her own self-preservation. It is both engrossing and heartbreaking seeing Yang’s relationship with Raven unfold, and eventually crumble. Raven then sides with Salem’s minions led by the recovering Cinder Fall, who possesses the stolen magic of one of the Four Maidens, and hopes to add that of the Spring Maiden to her arsenal. Cinder, despite her injuries laid on her by Ruby in Volume 3, is as smug and arrogant as ever. You’d think she would have learnt to be a little more cautious.

Our fourth major subplot is with Blake Belladonna, and her ongoing political conflict with the White Fang. Setting a clash of ideals on an island full of Faunus means a lot of different opinions on equality and racism in the world of Remnant. Faunus, being human/animal hybrids, are often mistreated in RWBY, and the White Fang have evolved with the times; going from a peaceful civil rights group to a full-on terrorist organization promoting Faunus supremacy. And don’t get me started on Adam Taurus, Blake’s ex, who is the maniac at the wheel. He has gone off the deep end in terms of characterization. He was an asshole before, but has gone to levels of a silly villain, acting like a manchild and hating everyone. He’s become Anakin Skywalker, but with bull horns. I hope he gets some character development in the next volume.

Blake learns to overcome her own fear of avoiding confrontation, refusing to run away from her problems again. She is put into conflict with her former friend, Ilia Amitola, a chameleon Faunus with a lot of rage and tears to shed. Ilia makes for an interesting character, conflicted and driven by bitter resentment to just about everyone who has wronged her. Not as psychotically or babyish as Adam though.

Being a chameleon, Ilia has a habit of hiding her true colours and blending in. She’s easily impressionable and a little clingy. I am not making puns for once, it is that important to her character. She also turns out to be the first openly lesbian character in the show, and has feelings for Blake. Blake really is oblivious to the feelings of others and runs after the wrong people. I feel Ilia’s redemption comes too quickly, but I think it can be linked to her personality by latching on to those with the loudest voice. It will be interesting see how Illa copes around Blake and Yang.

If there was something missing in this volume and it was the superbly animated fight sequences that made RWBY so amazing. It is clear that Rooster Teeth (and the fanbase) are still dealing with the death of show creator Monty Oum. His unique style of fast-paced and exciting fighting scenes really made RWBY stand out, along with the character designs. These sequences remained strong in Volume 3 and 4 after his death, but Volume 5 is sorely missing them. I’m not saying we require a fight every episode, but it did the same thing the 2014 Godzilla movie did by cutting away from the action. There are a couple of great fights, but the finale only has one. I suspect the change in animation software may also be a factor.

The big finale is split in two – Team RWBY vs. Cinder and Raven’s forces, and Blake leading an army against the White Fang. While the drama and interactions are the most important part, you have this large cast of characters about to duke it out, and we keep cutting away in-between fights. I don’t find the battle between the Faunus all that engaging, since there are no notable characters apart from Adam on the opposing team. And every time we jump back to the others, the fighting has occurred off-screen and everyone has just switched positions. There are some cool and fun moments here and there, and it allows Jaune to unlock his Semblance at long last. The first three seasons incorporated multiple, ongoing fights at once with amazing choreography, but it is sorely lacking here.

By the end, it is a total victory for our heroes, but the volume ends rather abruptly. Yang chews her mother out for her cowardice, and finally reunites with Blake. Yang has been mulling over Blake’s actions for ages, and this season even built up the anticipated reunion. But, by the time we get to it, the finale has minutes to go. While it is awesome to see the four members of Team RWBY come together, the relationship between Yang and Blake needed addressing beyond a couple of words and a group hug. On the other hand, Yang just lost her mother again, and the fact that Blake returned (by coincidence), may be enough in her eyes. Still, we have Volume 6 to look forward to, and the rift in their friendship will hopefully be resolved.

RWBY’s Volume 5 isn’t as good as its predecessors. It mostly suffers from bad pacing, and a lack of good battles, but characters remain as strong as ever. The animation just gets better with each season, and the music is beautiful. My love for this series hasn’t wavered at all, and I look forward to what is to come. Now, I just have to not go mad during the waiting process!

What were your thoughts of RWBY‘s sixth season? Love it or hate it? Leave a comment below or on our Twitter feed.