Home » Hot Lunch, A TV Show Within a Comic, Cooks up Serious Business 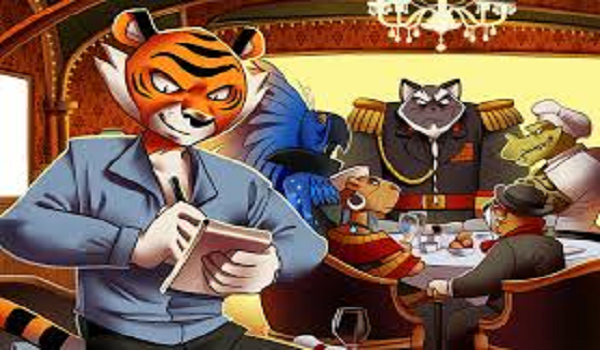 A while back, I reviewed Mayamada’s Serious Volume 1 about the anthropomorphic animals tackling the business world, which I found charming if not typical.  Mayamada has a whole host of comics and manga-inspired comics set in the same universe. It’s kind of fun and adventurous. This time, I’m reviewing Mayamada’s Hot Lunch. It is a manga-inspired version of a television show within Mayamada’s universe. (I think that’s right. Confused yet?) Hot Lunch is also about anthropomorphic animals (and also on Kickstarter!), but this time taking on the corrupt restaurant trade.

The synopsis given to the readers on the cover is “For two decades the Circle of Flavour has controlled the restaurant trade for their own clandestine ends. Their reign appears absolute until a band of thieves, led by former chef Taishi Yoshida, set out to dismantle the organisation and free its grip on the nation.”  That’s it, that’s the whole thing. This “Season 1, Episode 1” was the pilot episode so to speak–the main conflict is quickly established.  It’s one of the good points of the comic, it doesn’t drag it out.

The main character is Taishi Yoshida, a talking tiger (no, not Tony the Tiger’s lost long son, guys) and as far as main characters go, he’s pretty typical for the Mayamada stories. He’s from a line of excellent chefs and he’d been disgraced by the corrupt Circle of Flavour. Right now, the character is kind of meh. However, considering this is the “first episode,” I’m sure there will be time to flesh out characters and their arcs.

The art, inspired by Japanese manga, really does show in this particular series. It has so many shades of many manga that I’ve read over the years. (Check out stuff like Food Wars, Mixed Vegetables, Kitchen Princess and Yakitake Japan with similar themes about food and cooking, if you like Hot Lunch). I like the art style very much, as I’m a big fan of manga.

As of now, the bad guys are super generic, even more so than the main character. Corrupt businessmen and businesswoman? Yeah, that’s pretty much seen in every type of medium from superhero blockbusters to local crime dramas. I hope for more! Super secret recipes? Magical spices? Ancient blood feuds that go back generation? It’s never a manga with ancient blood feuds, I’m just saying.  It’s should be considered.

The story is definitely an enjoyable all-ages comic book. Anyone from any age group would enjoy it, especially if you can get over the talking animals thing outside of a Disney/Pixar or DreamWorks movie. I would recommend the comic to any one with young children in their lives to introduce them to the joys of comic books and manga. For veteran comic and manga readers, some may find the story too tired and worn to really enjoy it, but it’s a quick read, so just take a look.

Check out Mayamada’s Hot Lunch and other comics. Let us know what you think about the comic. Where would you like to see the comic go? Sound off in the comments or send us your thoughts on Facebook or Twitter!