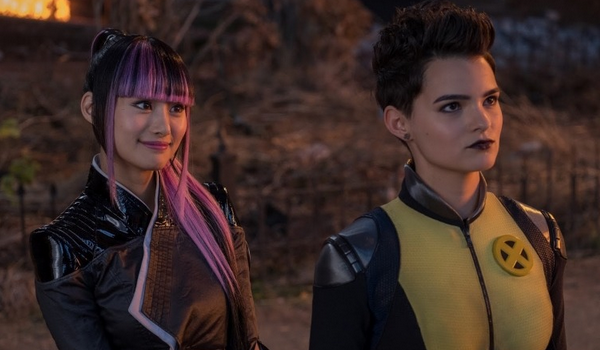 So here we are in the year of someone’s lord 2018 and we finally, finally have a openly gay superheroes in a mainstream movie. That’s right, our first big-screen superheroic lesbians have arrived in Deadpool 2. About damn time. Now the film’s approach to sexuality is far from perfect. Ellie and Yukio only appear in a couple scenes. And the series has completely ignored Deadpool’s own sexuality. That said, it’s still a noteworthy moment in the history of LGBT representation in mainstream media.

But before I continue let’s take a moment to point out that this article will be full of spoilers. Like Wade Wilson’s body is full of tumors.

So for those of you who have been living under a particularly remote rock that lacks internet access, Deadpool 2 recently came out to well deserved acclaim. And along with some new faces there were the familiar. Among them everybody’s favorite mopey young mutant, Negasonic Teenage Warhead. When we first see her it’s while Wade recovers from self-immolation. But she’s not alone. Along with her is the adorable cotton-candy haired Yukio, her girlfriend.

Of course Negasonic Teenage Warhead is far from the first LGBT superhero. Hell, she’s not even the first LGBT superhero to appear in mainstream films. There’s been Wonder Woman, Harley Quinn and Poison Ivy, Catwoman, Mystique, Iceman, Valkyrie, and of course Deadpool himself. But while all are part of the rainbow alphabet in their comics, none have been openly LGBT onscreen.

We’re in an interesting time when it comes to representation. Hollywood, and mainstream media, seem to have figured out that LGBT people have money and are willing to pay to see well-written takes on their communities. On the other hand, they don’t want to alienate any homophobic patrons. So they’re trying to have it both ways. Thus we get only the most subtle, fleeting examples of LGBT identities. Things that can easily be edited out, overlooked, or explained away.

Take the recent Beauty and the Beast remake. Before opening there was a lot said about Le Fou’s sexuality. When director Bill Condon said that his iteration of Le Fou would be gay, well, reactions were rather extreme. An Alabama cinema pulled the movie, Russian censors gave it a 16+ rating, and it simply didn’t play in Malaysia at all. All for what amounted to little more than a collection of lingering glances.

Similarly Power Rangers had a lesbian protagonist in the form of Yellow Ranger Trini. But even her identity got no more than a passing mention. Her struggles trying to fit in with her family’s expectations get a couple sentences. Indeed, she’s easily the most mysterious Power Ranger.

And then there’s the Harry Potter franchise. After the last book had been published J.K. Rowling outed Albus Dumbledore. Of course there was no indication he was queer in the original series. And now with the upcoming Fantastic Beasts: Crimes of Grindelwald film containing both him and his love/enemy Gellert Grindelwald there is finally a chance to acknowledge his sexuality. Of course there’s to be no such luck. As far as the current films are concerned Dumbledore is entirely straight.

LGBT audiences are, unfortunately, used to these instances of bait-and-switch. All of the above are some (though by no means all) examples of queerbaiting. A phenomenon where a story will hint at queerness without ever making things explicit. Or where queerness is all outside the text itself. In either case you need to be in the know to pick up on a character’s sexuality. It’s an attempt to court LGBT viewers (and our wallets) without alienating bigoted ones. Hell, even both Deadpool movies do it, with a pansexual lead who’s only shown with a woman.

All this to say, while the films have a way to go with regards to Deadpool’s sexuality, an unambiguously queer couple is noteworthy. The first time we see the couple Wade expresses shock that anyone would date Ellie. Date. No hints, no “close friends,” no “gal pals.” They’re openly dating.

It certainly helped that no one made a big deal of Negasonic Teenage Warhead’s sexuality. Without the build-up none of us were expecting much with regards to representation. So, uh, I guess the takeaway is to keep your expectations low?

It’s also no coincidence that the first acknowledged queer superheroes appear in an R-rated superhero movie. There’s a tendency in straight media to hypersexualize queer relationships or otherwise view them as more mature. Take that Alabama cinema, Henagar Drive-In that refused to play Beauty and the Beast (it’s worth noting that the cinema seems to be playing it now). But regarding their original decision they said:

If we cannot take our 11-year-old granddaughter and 8-year-old grandson to see a movie, we have no business watching it. If I can’t sit through a movie with God or Jesus sitting by me, then we have no business showing it. …We will continue to show family oriented films so you can feel free to come watch wholesome movies without worrying about sex, nudity, homosexuality and foul language.

Well you can’t really get more clear than that. On one side we have same-gender relationships, sex, nudity, and swearing. On the other we have family and children. And never the twain shall meet. As far as they are concerned queerness is inherently inappropriate, inherently adult, and inherently sexual in ways that heterosexuality is not.

Such ideology does a disservice to all the LGBT youth out there. It means queer relationships are unlikely to make it into children’s media. So LGBT kids are unlikely to see examples of healthy, happy relationships and people like them. They are more likely to internalize homophobia and more likely to feel alone or that there is something wrong with their sexuality. Furthermore in portraying LGBT relationships as inherently inappropriate mainstream media feeds into stereotypes that queer people are predatory or hypersexual. Encouraging some of the worst parts of homophobic rhetoric.

No one is ever going to argue that either Deadpool film is even remotely appropriate for children. But Negasonic Teenage Warhead and Yukio are portrayed in an age-appropriate, normal relationship. No angst, no drama, no death, not even an inappropriate line. What little we see of their relationship is innocent, healthy, and happy. They’re just two teenage superladies in love. They are, frankly, adorable. And what’s more even Wade refrains from any cheap lesbian jokes. The movie treats them as any other relationship.

So overall I was happy to see Negasonic Teenage Warhead and her lady friend. They’re cute, uncomplicated, and undeniably together. I only wish that they had more than a few meager minutes of screen time. So while it may not be the LGBT superhero movie we want or need, Deadpool 2 is a solid step in the right direction.

So what do you all think of our first openly gay heroes? Is Deadpool 2 a win for queer representation? Or is it just too little too late? Let us know in the comments section below or send us a Tweet!