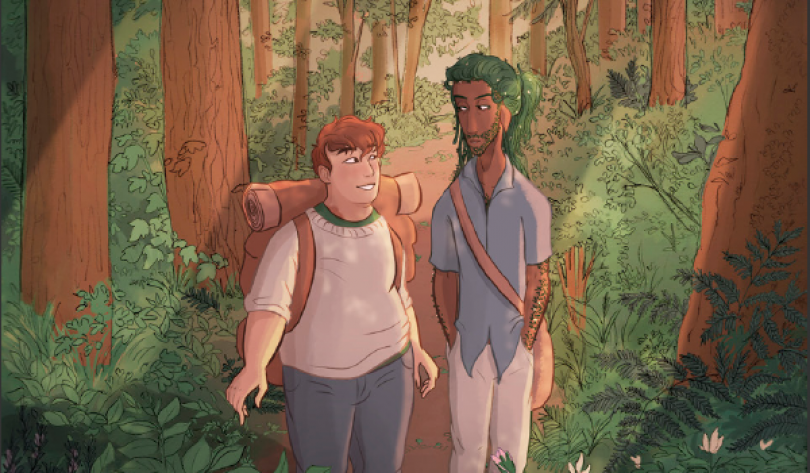 Most fantasy stories are high-concept, focusing on a succinct premise, world-building, and action. As you might expect, such an inventive genre lends itself well to high-concepts. So to come across a work of great low-concept fantasy, where the focus is on character and thematic subtleties, is a real treat. Finding Home, an ambitious 150-page volume written and illustrated by Hari Conner, is a beautiful example of low-concept fantasy. It constructs a world of magic and monsters, but wisely keeps its focus on the journey of its two protagonists, Chepi and Janek.

Before I get ahead of myself, I do want to direct you to Finding Home‘s Kickstarter page, where you can find more information about the book and check out a bunch of donation perks. But what’s that you say? You’d like to hear more about the book beforehand? Well then, by all means, allow me to elaborate.

Like I said, Finding Home‘s world is a world of magic, more specifically magic from the Fae, a group of wood nymphs. Chepi is a nymph, or rather half-nymph and half-human, which causes some tension. He feels torn between his two worlds, as we see in a series of memory flashbacks that are sprinkled throughout Finding Home‘s four chapters. Chepi is not content with staying in the Fae’s world (he wants to research medicine and science), but he also struggles with the prejudices against his kind that exist in the human cities. 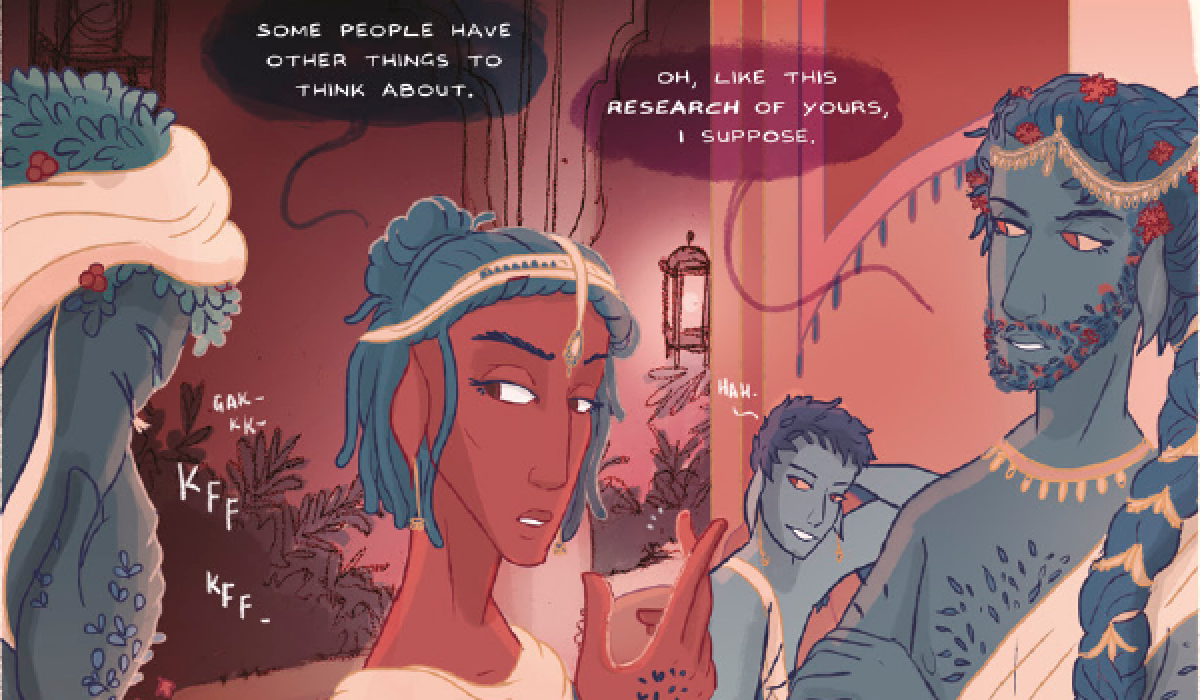 A character like Chepi is nothing new, but what Conner does to distinguish him from the rest is great. Whenever Chepi’s emotions are heightened (angry, sad, embarrassed, or anything else), his body begins to sprout flowers and leaves. It’s a clever way to visually express how he is feeling and great care was taken to have the plant life in the book take on specific symbolic meanings. A subtle touch, but a lovely one nonetheless.

Janek, the comic’s other protagonist, is a similarly complex character. At times, he acts as comic foil to Chepi’s straight man, bantering with him and cracking jokes. But all the while, his attraction for Chepi is obvious, though maybe not to Chepi himself, and Janek struggles with just what kind of relationship he wants to have with his fellow traveler. Their chemistry is a slow burn, so slow that there are elements left to be resolved even after the story is over, but I am glad that Conner takes their time. It is great to see that the normal romance arc (flirting, getting together, trouble starts, break-up, back together) is thrown out the window and replaced with a more mature development. 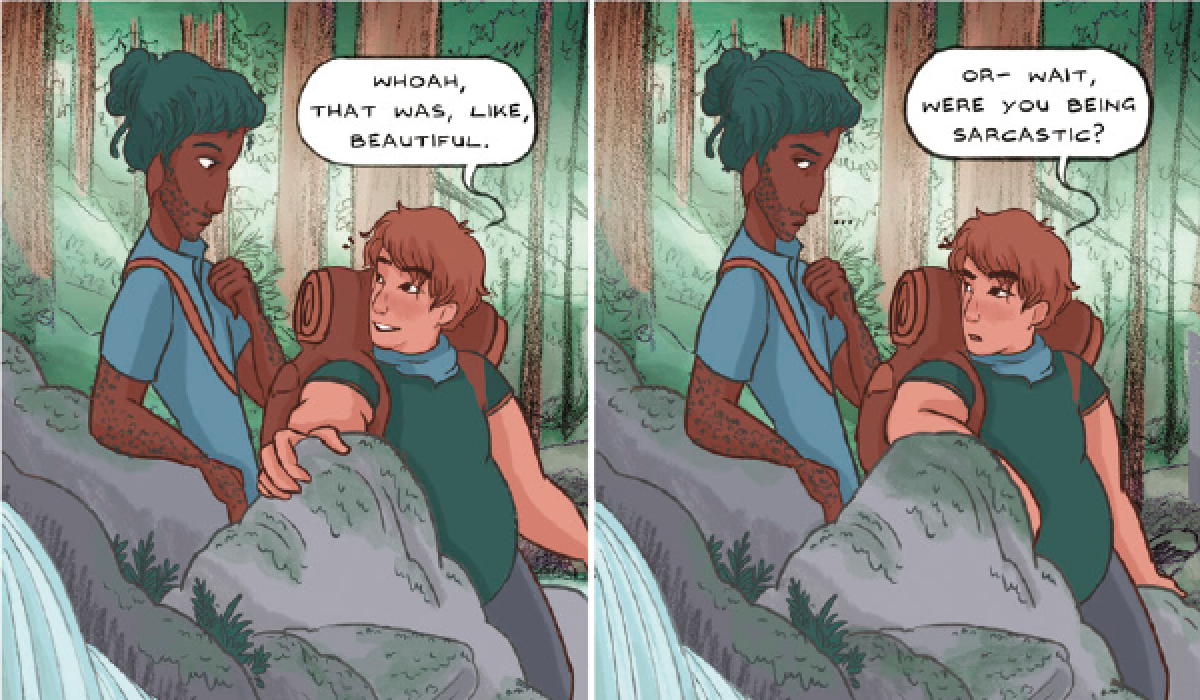 Aside from their romantic tension, the two must also contend with roaming wisps, shadowy cat-like monsters that Chepi is able to ward off with magic, but only to an extent. Toward the end of the comic, the wisps become more threatening and we see the full scope of their power. For a book that spends most of its time looking at human characters and natural backgrounds, the wisps’ dark designs stand out and are genuinely creepy.

And speaking of the artwork- wow! Conner has an impressive skill at drawing natural backgrounds, from dense forests to billowing waterfalls. Chepi and Janek are expressive and emotive all throughout, though the character design for Chepi and the other nymphs is particularly interesting. Conner gives the nymphs a blue-gray tint that reminds me of how Vishnu is often depicted in Hindu artwork. Something else Finding Home‘s artwork does well is how it depicts light sources. Campfires are warm and flickering and sharp rays of sunlight penetrate the layers of trees that Chepi and Janek hike through. All in all, the artwork in this comic is a treat for the eyes. 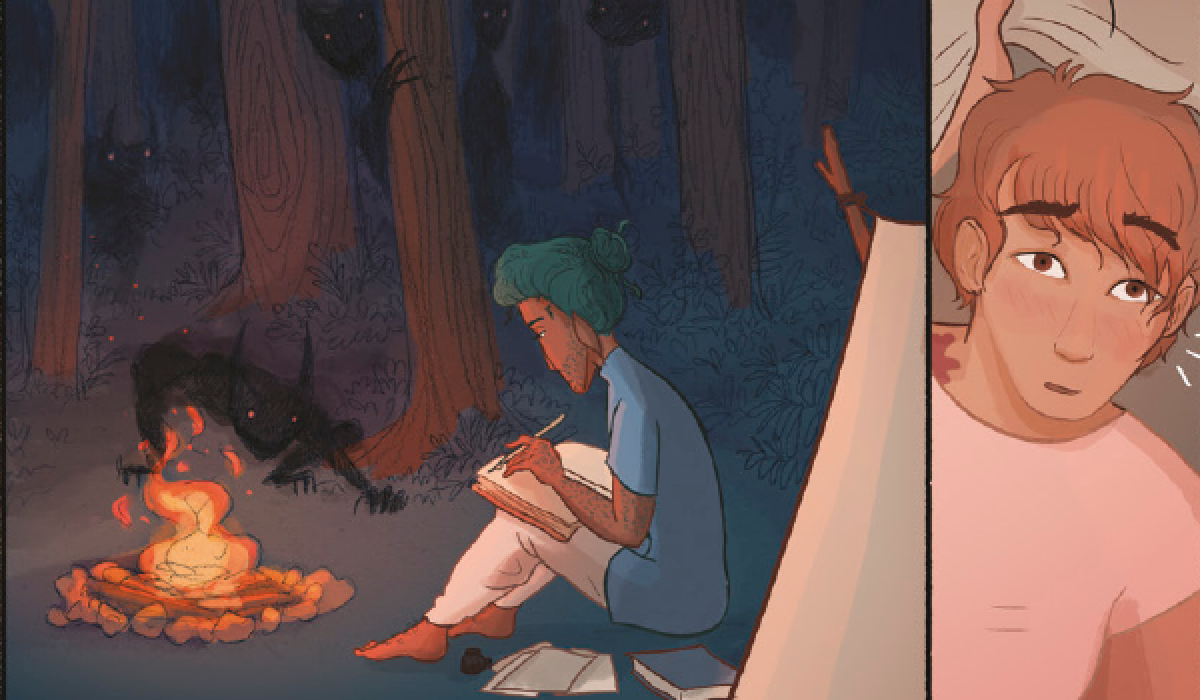 But my favorite element of all, something very subtle and even at first glance unimportant, is the comic’s use of “empty” panels. There are dozens of moments where one panel, a few panels, even entire pages are without dialogue or dramatic action. The focus is instead pulled toward slowing down a moment, connecting details to emotional themes, or simply enjoying the artwork. It’s a very cinematic technique that I would love to see be used more in mainstream comics, though it would lengthen the page count. But in Finding Home, these panels and the comic’s pacing overall are used very effectively.

Finding Home is not your typical romance or fantasy story. Because of that, the world building is not particularly deep or compelling and the magic-related dialogue can get a little clunky at times. But I commend this comic for prioritizing the chemistry between Chepi and Janek over these other elements. It is not as flashy or exciting as a story like this could be, but that deliberate choice sets Finding Home apart and makes for a more thoughtful read.

Once again, you can find the Kickstarter here! How does Finding Home sound to you? What other romances in fantasy stories do you enjoy? Sound off in the comments or send us your thoughts on Facebook or Twitter!