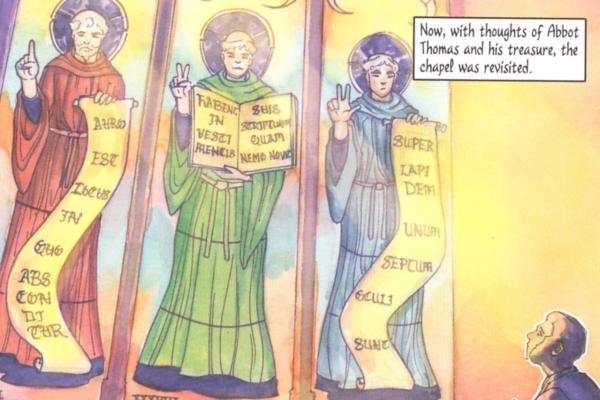 Comic book super duo Leah Moore and John Reppion have been cementing their tastes for the supernatural with their ongoing anthology series Ghost Stories of an Antiquary. A series of illustrated adaptation of short stories originally by M. R. James, their second volume, published through SelfMadeHero, is a timely reminder of James’ talents as a craftsman of dread and foreboding rather than spectacle of horror. However, on first inspection, there appears to be nothing as visually arresting as the stories found in Moore and Reppion’s first volume. It’s not that the contents of this second volume is sub-par, but rather that this second volume appears to demand more of your time, and is far more of a slow-burner than the previous volume.

Following the same pattern of adapting four stories by different artists, Volume II separates itself from Volume I by emphasising the feeling of uncomfortable uncertainty that characterised James’ literary efforts. Volume I prided itself on a fairly deft balance of that sense of dread with some brief, nimble dabbles of menace – understated rather than overemphasised. Volume II expands on this mentality by anchoring its four stories with that understated attitude.

George Kambadias‘ take on Number 13 stabs with precise tension, who’s story concerns a mystery room in a hotel that appears as rapidly as it disappears with little explanation. Abigail Larson‘s Count Magnus is the murkiest of the foursome, but is a suitable choice of style for this story’s exploration of tampering with ghostly forces best left alone. Al Davison‘s ‘Oh Whistle, and I’ll Come to You, My Lad’ feels like a fusion of the previous two strips, combining some clear-cut visuals in the story’s human players and evocatively sketchy wraiths. Meghan Hetrick‘s The Treasure of Abbot Thomas is the weakest of the bunch, it’s warm, innocent colours at odds with the unkempt terror the story projects. 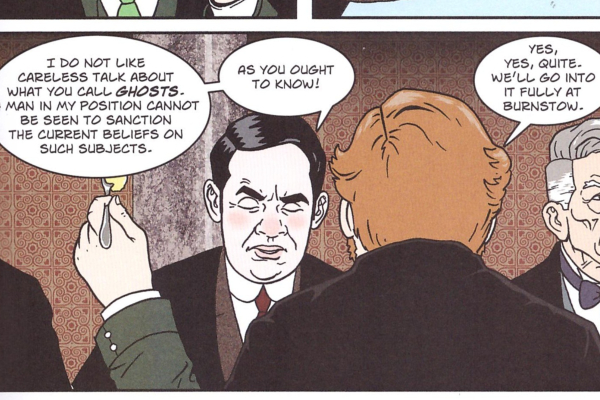 Binding the four stories together is a piercing sense of the unknown. Even if Hetrick’s vibrant aesthetics don’t suit the modest manner of James’ narratives, her swirling panels conjure a sense of growing madness that matches the story’s own styles. Larson’s art is the polar opposite of Hetrick’s but her attitude to getting the most out of her panelling is much the same. Count Magnus‘ panels veer between compressed and page-consuming, with both used more and more as the story of travel author Maxwell’s ill-advised curiosity with long-dead figures all the more enticing as he uncovers powers he can’t imagine. Number 13‘s tightly compact style is riddled with tension, giving the impression that whatever horror lurking within the namesake room is desperate to burst through, whilst ‘Oh Whistle, and I’ll Come to You, My Lad’ pays off that style in spades. That story’s own horrors spring forth in a chilling manner, continuing the theme of the deadly consequences of tampering with spirits.

Ghost Stories of an Antiquary Volume II doesn’t quite have the instant muscularity of Volume I, but you can’t help feel that that’s exactly what Volume II is aiming towards. It remains a taut and thrilling a read as its predecessor, with an equal cohesion of visual foreboding in its stories.

Are you terrified or intrigued by Ghost Stories of an Antiquary? Let us know in the comments section below or send us a Tweet! You can discover more about both of these volumes from SelfMadeHero.