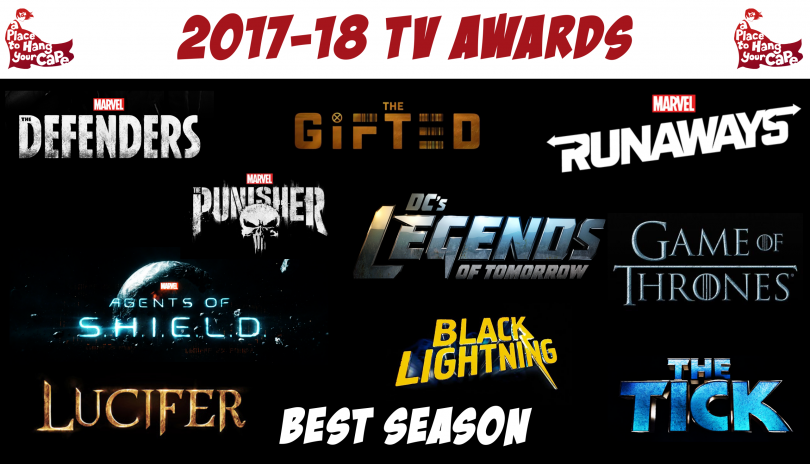 There have been some bad, decent, and great superhero shows this year. Marvel, DC, and everyone in between has produced impressive content that has entertained for a year. Check out our nominees for the best shows of the season and be sure to cast your vote!

Bringing together Jessica Jones, Daredevil, Iron Fist, and Luke Cage, The Defenders is a series that was as anticipated as it was entertaining. Watching our favorite Netflix heroes join forces made the series well worth the wait (even if their solo ventures were technically more fun to watch).

The latest (and perhaps final) Fox/Marvel team-up provided a nice combination of heart and action in its inaugural season. More of a family drama than a comic show, The Gifted was a fresh take on the genre that managed to tell compelling stories while maintaining the fun elements that superhero shows are known for.

Black Lightning is a fresh series that the CW was, frankly, in desperate need of. Having a hero face real stakes and fight foes other than some random dude with a grudge (looking at you Arrow) Black Lightning was a much needed and appreciated addition to the superhero line-up this season.

As the first Hulu/Marvel series, Runaways was a surprisingly fun addition to Marvel Television’s already impressive line-up. Having its young characters deal with legitimate problems, and portraying such problems seriously rather than in mocking fashion, the show was genuinely entertaining from start to finish.

Undoubtedly the most fun of the CW/DCTV series, Legends of Tomorrow continued to put our favorite characters in ridiculous situations that made for some real entertainment. Sprinkle in heartfelt moments and genuine camaraderie and you have the best season of LOT to date.

Officially deviating from the books from which it was based, Game of Thrones has slammed its foot on the gas peddle. Season 7 finally united the characters we’ve been watching for nearly a decade, artfully setting up the epic showdown that will come in the eighth and final season.

Agents of S.H.I.E.L.D. is a show that legitimately gets better and better each year. Season 5 was no different as it pushed our favorite characters through space and time while simultaneously going darker than it ever has before. With heavy loss, seemingly endless trauma, and a few of the brightest moments in the series to date, Season 5 was Grade A from start to finish.

Lucifer’s third season was a wild ride that ended with one helluva gamechanger. Our favorite Devil took viewers on a rollercoaster of emotions this year (as did the networks/streaming companies) and never failed to deliver entertainment. Thankfully, Fox’s foolish decision to cancel the series after its strongest season yet wasn’t enough to keep the good devil down. Season 4’s coming to Netflix!

The Tick was the hidden gem of superhero TV this year. Flying under the radar on Amazon Prime, the series was wholly entertaining and surprisingly emotional as it expertly balanced humor and seriousness.

The second Frank Castle appeared in Daredevil, viewers knew that he’d be getting his own spin-off. Season 1 of The Punisher was everything you’d expect it to be: bloody, violent, and dark as hell.