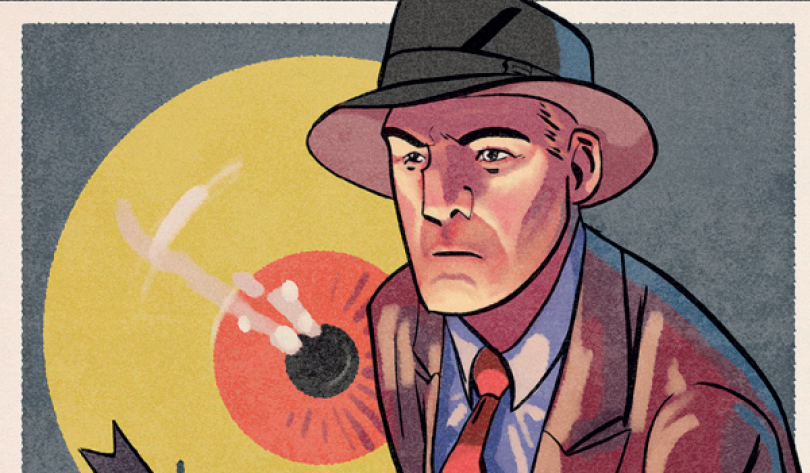 The combination of sci-fi and noir is an endlessly interesting and creative genre to work with. Everything from Blade Runner to Minority Report to Spider-Man Noir has so much to offer in terms of story and art design. I think I appreciate this genre in comics especially because it touches on two of the very first comic genres invented way back in the earliest years of the medium; think pulp characters like Dick Tracy and the Shadow crossed with sci-fi staples like John Carter and Flash Gordon.

The first collected volume of Gateway City, a sci-fi noir created by Russell Mark Olson and currently campaigning on Kickstarter, seamlessly blends these two genres and delivers a highly entertaining, original story. I had the pleasure of talking with Olson about Gateway City, his influences as a writer/artist, and the process of comic creation as a whole.

AP2HYC: How did your work in comics begin?

Russell Mark Olson: While teaching English in South Korea back in 2004, I began working on a MySpace comic called Jors & Rust as a way of keeping in touch with friends and family back home. J&R is a zany buddy comic about amplified and fairly unflattering versions of my good buddy, comedian Josh Arnold, and myself. I took J&R from web to print and back to web a few times before shelving it for a bit. My first published piece was in Dirty Rotten Comics #11, a short murder mystery comic called Horatia Hale in the Scapegoat.

AP2HYC: Noir is one of my favorite genres in film and literature. What drew you to it?

RMO: Probably from a couple of different places. My dad is a big fan of classic cinema, so black and white films were commonly on our TV: The Maltese Falcon, Double Indemnity, The Third Man, they all shaped my visual vocabulary. I’m also a voracious reader and have worked in book stores and libraries over the past 20 years. Being surrounded by books makes for ample opportunity to be exposed to new and classic literature. Along the way I’ve discovered the greats like Dashiell Hammett, Chester Himes and international voices like the brilliant Marek Krajewski. Not to be left out are great crime, mystery and neo-gothic writers like Dorothy L. Sayers and Daphne Du Maurier.

But I suppose all of this doesn’t explain why I love it. I think I’m drawn to noir because I’m interested in how we as humans are able to be manipulated and know that we’re being manipulated and still allow it to happen. There are various reasons why this happens, and noir tries to map these out. The first volume of Gateway City explores the beginnings of these traps. I think the most visible examples are with Bumper Donati and Senator Whelan. They’re being fooled by loyalty and ambition, respectively, and are coping with the manipulations in very different ways. I love exploring these human traits. I could go on, but I don’t want to give anything away. 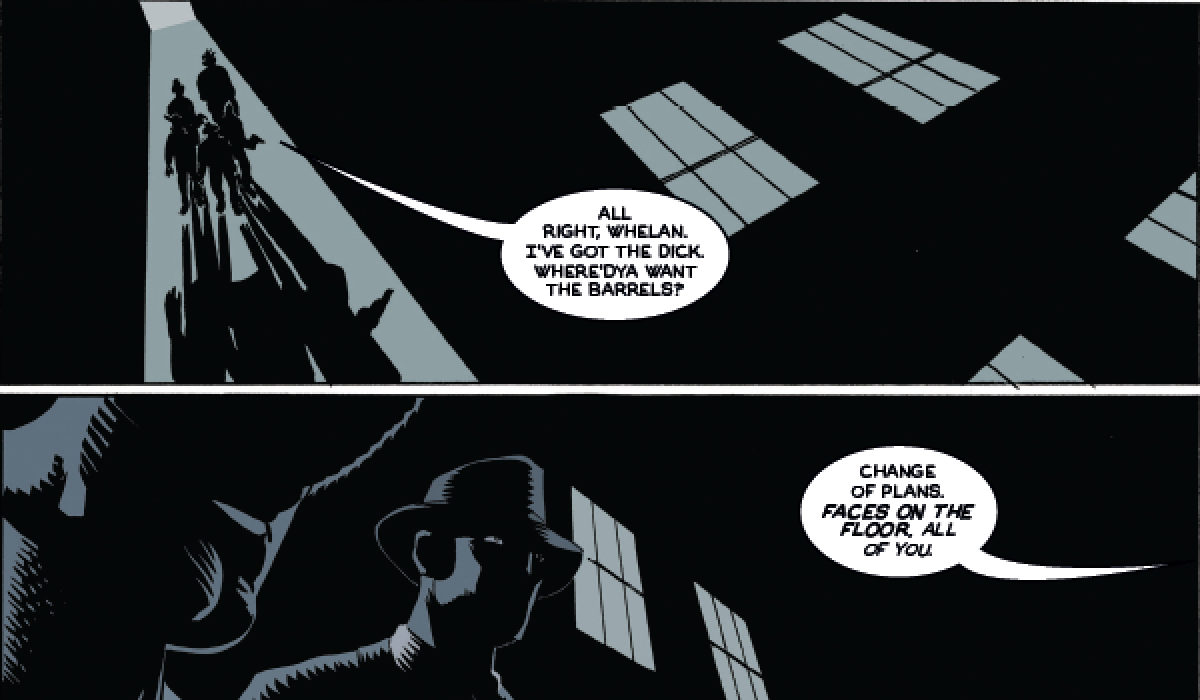 AP2HYC: Did you always know how you would incorporate the sci-fi elements into this story, or was there a more gradual process? Their integration is one my favorite parts about reading this comic.

RMO: Oddly enough, the story started as a sci-fi comic years ago in my sketchbooks. It was about a bum, a casualty of the Great Depression, who was freezing to death. Sunny stuff, right? It was a kind of pastiche of Little Nemo in Slumberland. As the bum was drifting off into oblivion, a little cockroach came to take him away to the Afterland. The comic (which only exists in hundreds of pages of layouts) was a meandering journey through various allegories meant to represent the different philosophies that were being discussed in cafes and at the ballot boxes of the 1920s and 30s. I couldn’t quite get it to work so I shelved it.

Then, when reading Dick Tracy and Red Harvest (Dasheill Hammet’s best work), it clicked. The key to the story was not to take the bum into the world of fantasy, but to bring the fantasy to the bum…and I also decided to transform the bum into a capable and canny private eye. I thought noir and sci-fi would go together fairly well. Sci-fi, historically has dealt with the theme of humanity over-extending itself. Thematically, it synchs up pretty well with the corruptive nature of noir. To that end, I’m not only interested in looking at just the humans, I’m also excited to explore the sci-fi characters. I want to compare their vices and corruption with those of humans…they’re bad guys, sure…but are they worse than the humans?

AP2HYC: “Lundy” is a very compelling protagonist to follow. What do you value most when writing a character?

RMO: Thanks! I love Lundy. He’s a blend of my favorite noir characters and detectives: he’s pragmatic like the Continental Op (another Dasheill Hammet detective), he’s unerringly loyal like Holly Martins (from The Third Man), emotionally aloof like Humphrey Bogart in nearly every of his films…but what do I value most? I guess getting to know them. Getting to spend time in their heads, figuring out what makes them tick…even if all of the development doesn’t make its way into the final piece. I like to get a sense of their voices and love to see what happens when two characters make their way into the same room. 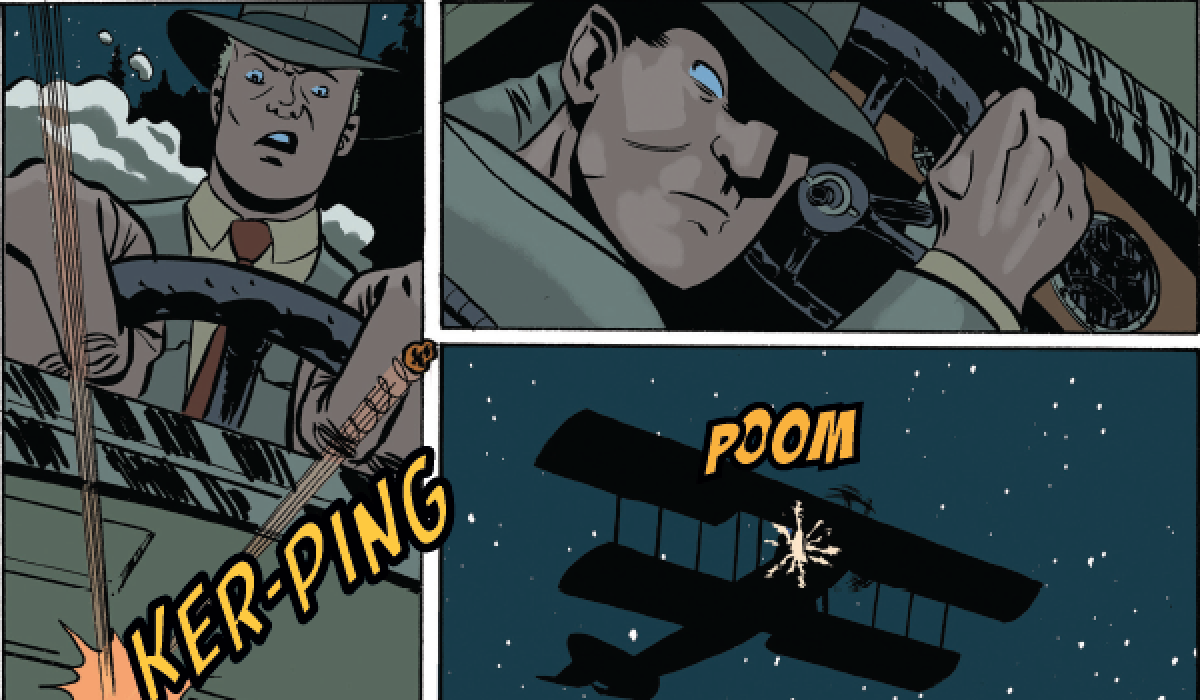 AP2HYC: Chicago, Los Angeles, and New York often get all the attention in noir-set stories. Why set the comic in St. Louis?

RMO: I’m from Eastern Missouri, but moved to the UK ten years ago. As a way of connecting with my love of the city and its history, I decided to place the story there. St. Louis is called the Gateway City, as it was the starting point for settlers and gold miners heading west in search of the American Dream. It seemed a good fit to make it a natural gateway point, not only for pioneers, but the universe as well. St. Louis also has a rich history of Prohibition gangsters, rum runners and crooked politicians. The guy who introduced the ubiquitous tommy gun into the icon of the gangster got his start in St. Louis.

I also chose it because it’s a place I know well. I can see its streets in my head. I love the Rivers of London series by Ben Aaronovitch for a number of reasons, but chiefly for how well he captures London. Aaronovitch uses his The Knowledge-like experience of London to make us believe that his characters aren’t just floating around in a non-descript metropolis. London is just as much of a character as P.C. Grant and Nightingale. I wanted to use the landmarks and neighborhoods of St. Louis to help create believable set pieces even though the most unbelievable things are happening around them. I want St. Louis to be just as much of a character as the “actors” moving around it.

AP2HYC: You mention Chester Gould’s classic Dick Tracy comics as an influence. What were some other influences for you, in comics, movies, or books, when making Gateway City?

RMO: As well as those mentioned above, Bruce Timm’s Batman: the Animated Series has been a massive influence to my work. I also love Dave Stevens’s The Rocketeer…the attention to detail and distillation of everything that we love about 1930s-40s California. I’m also indebted to the EC Comics library. I would love to get my linework as expressive as Harvey Kurtzman’s. I draw a lot of inspiration from the German Expressionists, too, particularly in color choice and figure rendering. The works of Egon Schiele, Kathe Kollwitz, and George Grosz have had a tremendous influence on my line work and character designs. And probably a million other things. I’m a bit of a magpie. 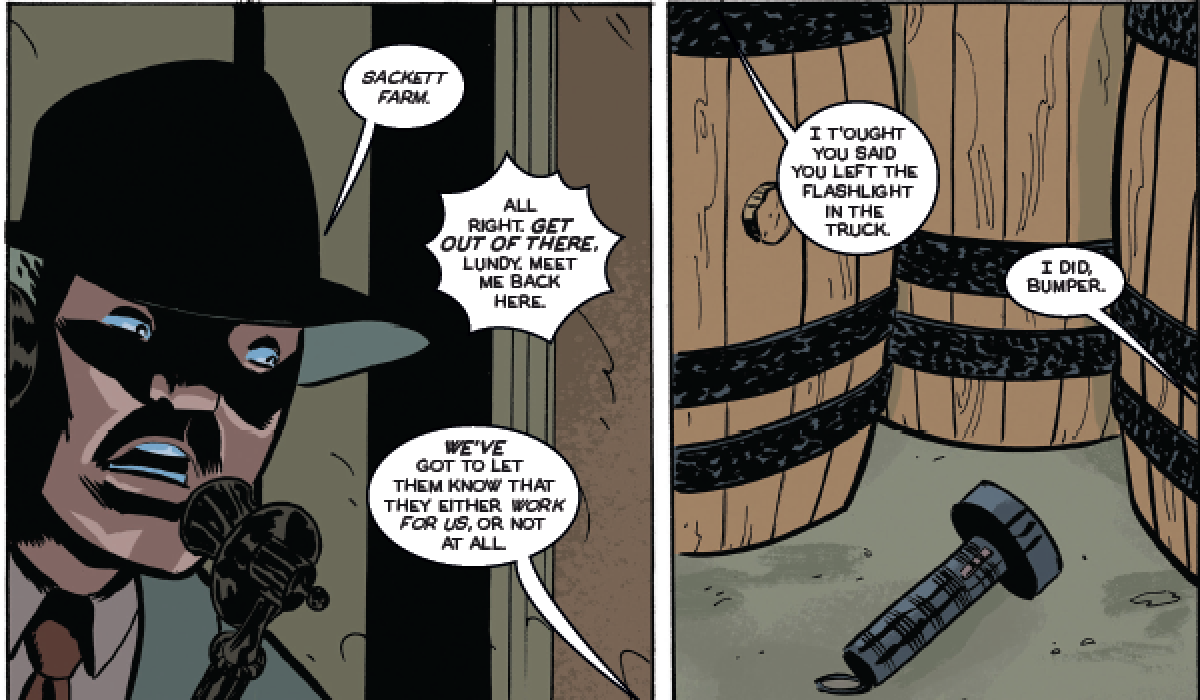 AP2HYC: For a noir-set comic, there’s a lot of dynamic color in your artwork. What did you enjoy most about the artwork of Gateway City?

RMO: I think my natural color palette is a muted, soft one. As well as the artists listed above, the American Realists and Ashcan School have a certain aesthetic that I’ve always been drawn to. I love those soft dark greens punctuated by sultry glowing oranges. I’ve tried to choose color schemes that evoke a time gone by. I love black and white noir, but I think my drawing style is best served by color…and works like Batman: the Animated Series show that noir is far more than just a monochromatic color palette, it’s cool blue shadows hiding under a hot yellow sun. To be perfectly honest, the colors are the thing I like most about Gateway.

AP2HYC: What was the most challenging part about this project?

RMO: Keeping the various storylines ticking over and giving each character time to develop in front of the reader. I want Gateway City to be more than just the story of Lundy, but because I published the first four chapters in 22 page issues, it meant that I had to chop a lot of things out. I guess economy and value have been the most challenging parts. I’m fortunate that John Freeman agreed to come in and edit the book before being collected. I hope that the trade paperback, which will hold a few additional scenes and some tighter dialogue here and there, will help to overcome a few of those hurdles. But I would say that this is an introduction to the world, and so I have kept a number of things purposely mysterious so that they can naturally unfold later down the line. 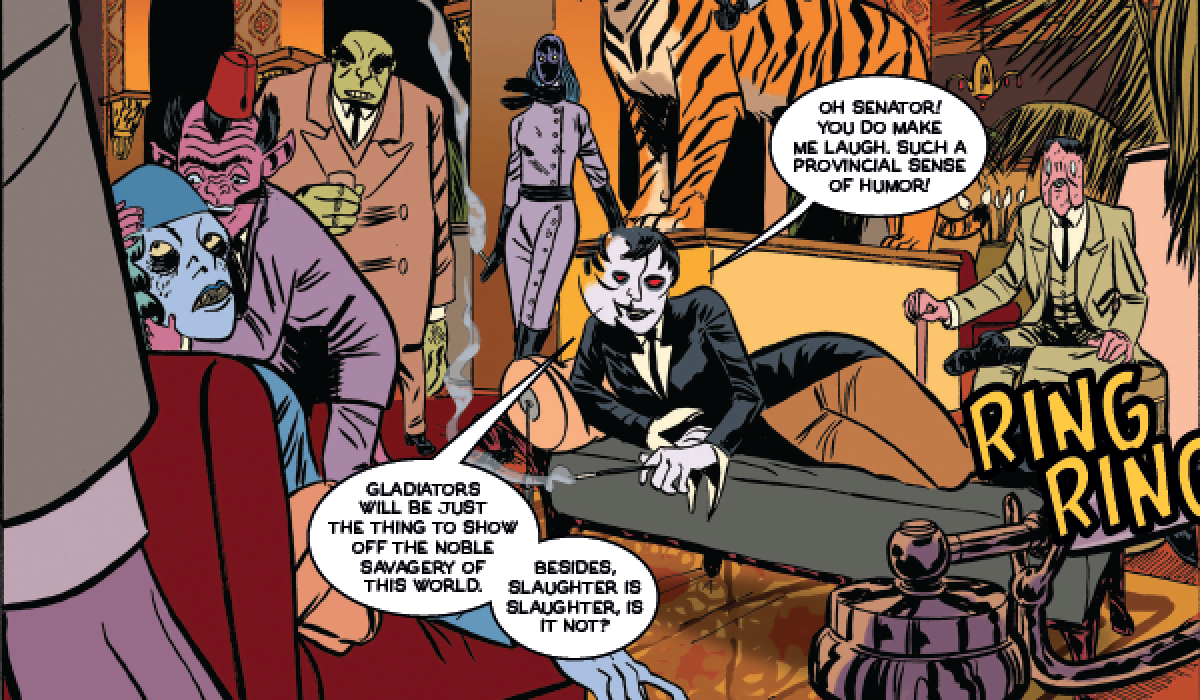 AP2HYC: Do you have any ideas for future volumes of Gateway City?

RMO: Loads and loads. I want to keep following Lundy and the gang as they investigate what the heck is going on and try to keep the city from being overrun by their new visitors…balancing law and order with investigation and detection. I also want to explore how the average Joe is coping with their world being turned on its head. I’d love to see how Bill and Linda Everyman deal with the events of Volume 1.

AP2HYC: What project(s) are you working on now?

RMO: My two main focuses are Gateway City and Cult Empire’s Lady Hollywood, a neon noir vigilante comic set in modern day L.A., with a strong female lead. It’s a great counterpoint to Gateway City and I love working with writer George Lennox. It’s a cinematic hoot. I’ve also got some work in Mad Robot’s upcoming Cadavers anthology. That one was a lot of fun. I’m also putting together a few pitches with some wonderfully talented folk. I’m honored to have met some amazing pros and semi-pros over the past few years and to get to play in various sandboxes. Who knows what’ll come of any of them, but that’s the business ain’t it? I love comics and I love paying the dues.

Check out Gateway City‘s Kickstarter here! What sci-fi and noir comics do you like? What comic would you want to create? Sound off in the comments or send us your thoughts on Facebook or Twitter!