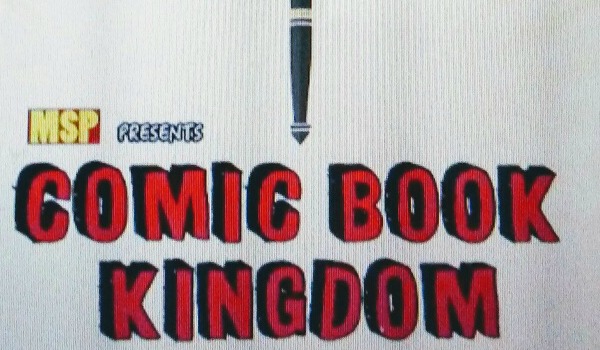 Sometimes, writing comic book reviews can be exhausting. Don’t get me wrong, it’s enjoyable work. However, after being on a dark, brooding kick with most of my latest assignments, it’s nice to be able to sit back, put my feet up and just watch something lighter. So naturally, I watch a film where someone draws a figure of Death for an hour. But the guy is so cheerful as he does it. Directed by Marius Smuts, Comic Book Kingdom is a documentary where comic books and manga rule over all other subject matter. Take that Al Gore! Arguably less important than exposing an inconvenient truth, Comic Book Kingdom offers a pleasant tour on the art of comic creating.

The documentary explores the trials and tribulations of comic book and manga creators across the UK. Each interviewee has stories to share, from the birth of their comic book love to marketing their creations. With varying press sizes and styles, all those involved in the project bring something different to the camera.

Clearly, each speaker has a passion and love for what they do with their lives. That’s possibly the mightiest superpower Comic Book Kingdom has, although someone may secretly have x-ray vision and kept that tidbit to themselves. One of the highlights and sweetest moments is displayed by creator Myfanwy Tristram, who shows off a comic based on her daughter’s quirky wardrobe. It’s just one example of how the documentary is personal and is very much invested in telling everyone’s experiences and creative processes.

However, in the midst is also a lot of valuable and perceptive insight into the comic industry: on how it literally takes a village to produce a comic, so actual socializing and talking to other human beings has to happen; why people are madly infatuated with superheroes; the trend running amok through independent comics of apocalyptic and dystopian futures. If you need supportive evidence of this, I encourage you to scroll through the “Comic” page of our website. There’s a lot of ground covered in the hair-over an hour long documentary.

Even superheroes have weaknesses, and Comic Book Kingdom isn’t without it’s kryptonite, although it’s not life-threatening. The documentary is very slow to start talking about comic books. I’m unsure if this was intentional, but most interviewees begin with “I was born/grew up…” After the fifth time hearing it, you could start a drinking game that wouldn’t flatten you out, but maybe loosen your gears up. And after their introductions, some of the folks don’t reappear for a while. That’s understandable, though off-putting when a viewer forgets who someone is after not seeing their face for thirty minutes. Additionally, as part of the creative process shown, several of the creators literally create artwork on camera. At times, it’s difficult to see if the sketch is in infancy. When this thought first struck me, the filmmaker must have thought this too because the camera rapidly zooms in.

Anyone flirting with the idea to create their own comic should take in Comic Book Kingdom. Learn from these speakers’ triumphs and failures so you can add new ones to your own collection. Now I’ll go skulk back into my dark corner.

Have you watched Comic Book Kingdom? If so, tell us your thoughts in the comments or send them on Facebook or Twitter!