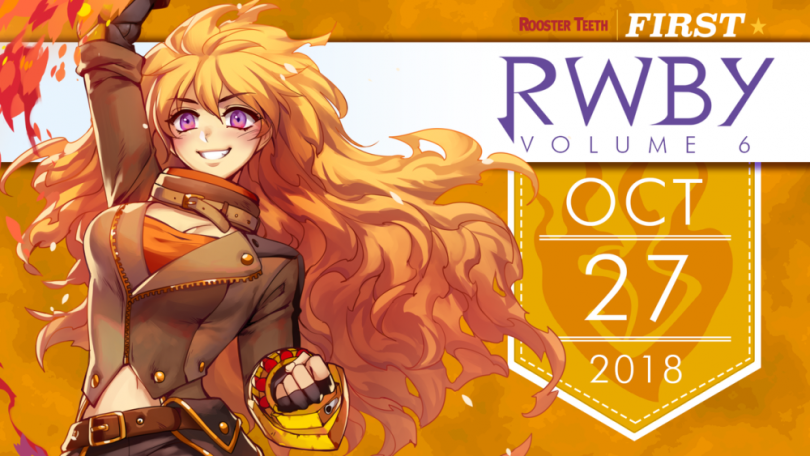 Welcome back to our fresher’s course to the world of RWBY, the animated web series produced by Rooster Teeth. Rooster Teeth’s annual convention, RTX, occurred recently, and gave us the release date for RWBY’s sixth volume: October 27th, 2018. We also received another character short, this time focusing on Adam Taurus. Admittedly, it didn’t really reveal much about his origins or reason for hating humans, but rather the slow transformation from idealist, to spiteful dictator. Anyway, this second chapter focuses on other important parts of the show’s lore. 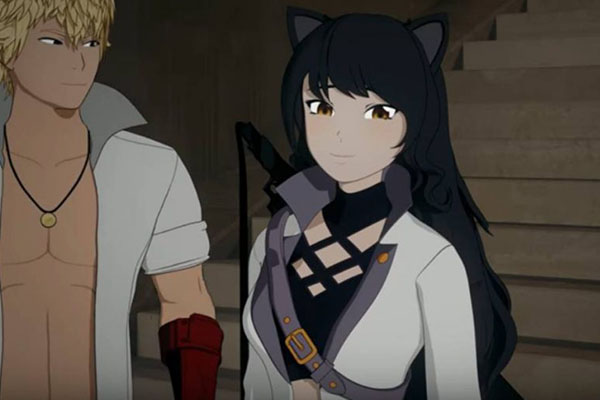 Humans and Grimm aren’t the only creatures battling for survival in Remnant. The Faunus are an often segregated race, formerly enslaved, but are still mistreated. Faunus are humans with distinct animal features and related abilities. Blake Belladonna, for example, has cat ears and a feline’s flexibility (and a love for tuna). Others are more unique, like the chameleon-esque Illa Amitola, who can blend in with her surroundings via camouflage. After the Great War occurred, the Faunus were granted equality by the last King of Vale, with the island of Menagerie gifted to them. Still, it was a bad deal, with Menagerie having limited land and dodgy airwaves. Faunus are still often mistreated worldwide, particularly in Atlas and Mantle, exploited by the Schnee Dust Company. 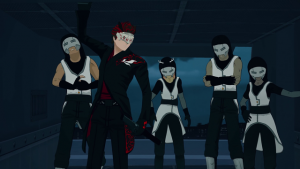 From good intentions to violent supremacy, the White Fang is a political terrorism movement demanding equality for Faunus. Though Faunus were given Menagerie, many were angry, leading to the Faunus Rights Revolution. Afterward, the White Fang was formed as a peace group to unify humans and Faunus via non-violent protest. However, times and minds changed, leading to the more violent terrorist group, who hate all humans fanatically. Blake is a former member, having fled the group in the “Black” trailer, haunted by her own past and the actions of her creepy ex, Adam Taurus. 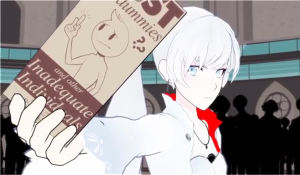 A big nemesis of the White Fang is the Schnee Dust Company, run by Weiss Schnee’s family. It is the largest Dust mining company in Remnant, but has quite the reputation for being corrupt. The company was founded by Weiss’ grandfather, Nicholas Schnee, who was a good businessman and boss. But, when forced into early retirement, the SDC was rather stupidly handed over to his new son-in-law, Jacques, who married Nicholas’ daughter. Now, the SDC has a highly controversial reputation – cheap labour forces, dangerous working conditions, and a disregard for the Faunus in the company’s service. Being a douchebag, Jacque doesn’t care for others, only power, and crushing those in his way to it. No wonder the White Fang often target the SDC for how they treat Faunus. The Schnees have much influence in Remnant and the Atlesian government and military, designing the Cross Continental Transmit System which keeps communications between the four kingdoms up and running. Weiss Schnee works hard to try and fix the broken reputation of her family’s company, but faces a few obstacles on the way. 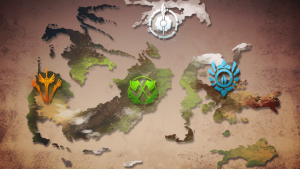 I suppose we should actually talk about the setting itself. The world of Remnant is split between four kingdoms, mostly dominated by major cities, where the Huntsmen Academies are based. Beyond the cities, most villages are constantly threatened by Grimm. Vale is the main setting of the story, centered around Beacon Academy, run by Professor Ozpin. Ruby Rose and Yang Xiao Long live on the island of Patch. An attempt to build settlements beyond the bordering mountains of Vale proved to be a disaster, particularly with Mountain Glenn, which was destroyed by Grimm.

Atlas, a technologically superior nation, is the youngest of the four. The city of Mantle was the original kingdom prior to the Great War, banning the art of self-expression to avoid attracting Grimm. While Atlas flourished, Mantle was left to rot, and is home to many downtrodden Faunus. Mistral has the largest territory of the kingdoms with a wide variety of lifestyles and cultures, but a unified respect for nature. Mistral also has the largest black market in Remnant. Vacuo is mostly a barren desert where survival is key to living. Once a thriving land based around an oasis and the world’s largest Dust deposit, mankind fought over and squandered Vacuo’s resources. If you can survive in Vacuo, you are welcome there. Beyond the four kingdoms is Menagerie, home of the Faunus, and the strange dark continent north of Vacuo, which hasn’t been visited in the show by our heroes. 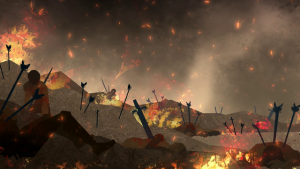 The most vital event in Remnant’s history, the Great War, occurred around eighty-to-ninety years before the events of RWBY. A mix of cultural suppression, slavery, and attempted expansion led to all-out war. Vale fought off Mistral and Mantle, with Vacuo joining Vale once the enemy tried seizing its Dust resources. The Grimm and Faunus joined the mayhem, and the war dramatically ended in Vacuo, where the last King of Vale single-handidly brought down the opposing forces. The war ended with the king winning, but he instead proposed peace between the four nations. Faunus slavery was abolished, Atlas was founded, the tradition of colour-based names was established, and the King of Vale had the four Huntsmen Academies built. In remembrance of the world, the Vytal Festival occurs every few years. 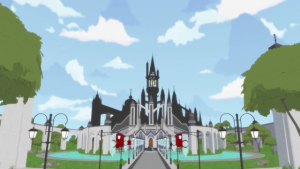 While Remnant has many huntsmen academies, those in the four kingdoms stand out. Beacon Academy in Vale is run by Professor Ozpin. Atlas Academy is the most technologically advanced, but militaristic, run by General James Ironwood. Though we visit Mistral’s Haven Academy in Volume 5, we don’t really know much about it, but it is run by the cowardly Professor Lionheart. The fourth school, Shade Academy, remains a mystery, beyond it being the sole sense of authority in Vacuo. As revealed throughout the series, the four Academies have an important role to play in the story, and hide deep secrets within their walls. Other academies include Signal Academy, which Ruby Rose attends before joining Beacon.