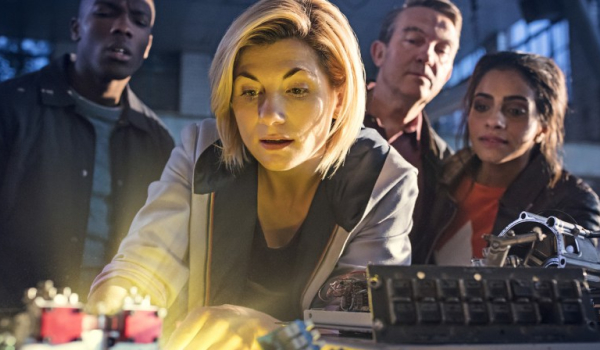 After ten months off the air, Doctor Who is back – and it’s about time! Among other things…

Innes Lloyd was a genius. The third producer on Doctor Who, arriving in 1966, he oversaw the departure of the ailing William Hartnell from the role. In doing so, managed to transform a neat bit of lamp-shading into the centrepiece of the show’s whole mythology; the reason, I’d argue, that we’re still enjoying, that we’re still able to enjoy it, more than fifty years later.

In a word: regeneration. Out with the old, in with the new.

Since then, change, the promise of it, the capacity and indeed the need for it, has been a crucial part of the show’s DNA. The Doctor as we know them, be they old or young, stern or ebullient, frock-coated or rainbow-clad, will, sooner or later, change into someone new. New, and yet oh so familiar. Jodie Whittaker is no exception. She may be the first female Doctor – not the only way in which the new show-runner Chris Chibnall has broken from established tradition – but she’s still the smart, funny, feeling Time Lord we know and love.

So, Sheffield. No more the council estates settings of Russell T. Davies; the Big Ben (of Aliens Of London), the Gherkin (of The Bells Of Saint John), or Saint Paul’s (of Death In Heaven). Instead, this first episode of the new New Who (the new new new New Who if we’re keeping count) goes for a certain understated naturalism; effectively splitting the difference between social drama a la Davies and the fairy-tale touches Moffat brought to Matt Smith’s first season.

Twenty-something Ryan (Toisin Cole) is learning to ride a bike, deeply frustrated despite the encouragement of his free-spirited grandmother Grace (Sharon D. Clarke) and “granddad”, her second husband Graham (Bradley Walsh). As metaphors go, learning to ride a bike feels like a fitting metaphor for the early training-wheel days of the reinvigorated Who. Before too long, though, we’re down in the woods with a blue alien pod, floating gold runes, and a Medusa-like ball of live electrical wires is making an appearance on National Rail. And that’s even before this strange new woman crashes through the roof of the carriage.

It’s to the episode’s credit that I, a fairly seasoned Whovian, didn’t know quite where we’d go from here. In fact, I felt a bit un-moored – and not just down to the accents! Much of what we’ve come to rely on, to take for granted since Doctor Who came back – not as a fundamental part of the show, but a matter of show-runner style – seems to have been stripped back. You could always rely on Davies to be soapy or Moffat to be clever-clever (both brilliantly, belovedly, I might add), and while Chibnall, perhaps, hews closer to the former – case and point: a drunk guy tossing his kebab salad (so to speak) at an insectoid-masked alien – he’s beholden to no one.  In terms of introductory episodes, The Woman Who Fell to Earth is closest to Matt Smith’s debut, The Eleventh Hour: new Doctor, new companion(s), a mostly self-contained threat.

Whittaker, meanwhile, shines; and not just because of the lingering effects of regeneration energy. Still wearing her predecessor’s costume, as new Doctor’s are wont, Whittaker makes an immediate impression in the role: quizzical, determined, and, most notably, given Peter Capaldi’s ambivalent beginnings (“Am I a good man?”), fundamentally decent. The offhand, yet sincere, thanks that Whittaker’s Doctor – the thirteenth if we’re keeping count (not counting John Hurt’s “War”) – gives to one of her new companions speaks volumes. There might be a toothy new villain to conquer – shades of both Predator 2 and, strangely enough, Skyscraper – but The Doctor is The Doctor is The Doctor (capital The – “the definite article you might say!”). She hates empty pockets – what more do you need to know?!

With no opening credits and without a full airing of the title theme (composed by Segun Akniola and, so far, promisingly retro), this is streamlined, no-frills Who. “I’m a traveller”, she says – no Lonely God, no Oncoming Storm; just one of an ensemble that includes Ryan, Graham, and the eminently sensible Yas (Mandip Gill). The show may not be quite comfortable in its own skin – the idea that The Doctor temporarily can’t remember her name (or at least pseudonym) is never developed – but so far there’s a lot of promise.

Capaldi ended his tenure fighting the Cybermen, the Mondasian Cybermen no less, at his request, and for the time-filling Christmas special – convince me Capaldi wasn’t meant to regenerate at the end of The Doctor Falls – Moffat even brought back the First Doctor (as played by David Bradley); playing the ’60s chauvinism for laughs. It shows how far we’ve come that the new Doctor is a woman (!!!) barely gets a mention.

Having reportedly jettisoned the classic monsters for this first season, and with some new influences of his own, Chibnall seems to be offering us a baggage-free season of Who: a new formula, a new Doctor, and a new gang of mates that promise to bring out the best in our errant time-traveller with her magic box (whenever she gets it back). In the meantime, let’s just enjoy it – change, my dears, and not a moment too soon!