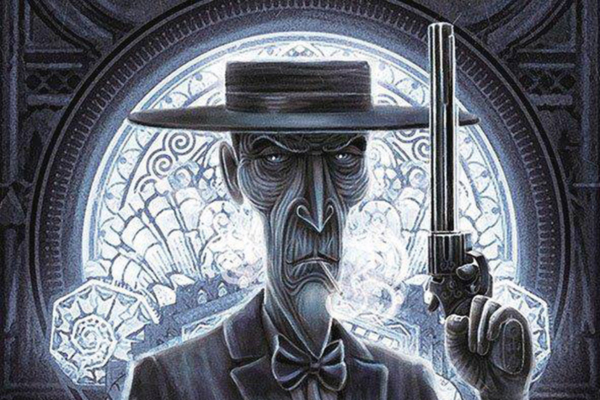 After a slim amount of individual stories in #7 (the bulk of which was populated by Simone Buchert‘s heart-breaking yet masterful Cut Out), #8 of Soaring Penguin’s flagship anthology Meanwhile… delivers a riveting collection of weird and wondrous comic strips. Four of the comic’s 13 strips are ongoing titles who provide that recognisable dose of insanity that seems to come with every issue of Meanwhile…, i.e. Strangehaven, The Bad Bad Place, The Collector and Gail Key’s Psychic Lost Item Helpline.

What really makes Meanwhile… #8 crackle and buzz are the one-off strips scattered in-between the ongoing ones. Jonathan Scott‘s Remember Me Later captures a raw, harrowing snapshot of dementia, as a grandson’s visit to see his ill grandfather shows its emotive impact more than it tells. The grandson is warped, out of focus, as if we see this person through the eyes of the grandfather, all the while the grandson ponders whether or not people will remember himself. The dialogue and visuals work in tandem to capture a disconnected relationship, all in the space of one page.

Work Hard by Shing Yin Khor encapsulates society’s broken sentiment of how hard work will always reap rewards with black humour and an even darker sentiment. Boum‘s Labour (Boum being the creator behind the gentle affecting A Small Revolution) bears a similar message through the difficulties of being pregnant, but ends on a more hopeful note. This reflection of a warped, unsympathetic mindset we humans are capable of comes to a head in Darryl Cunningham‘s snarling, violent epic The Fist. Detailing a day in the life of a thuggish brute who traverses round the neighbourhood murdering anyone fighting for a fairer, more compassionate society, it wears its politics proudly on its sleeve. Two other strips included here are samplers from full-length comics – Martin Simpson‘s immersive totalitarian fable The Needleman and Serge Baeken‘s gently affectionate biography of his beloved cats Sugar: Tim. Their graphic novel counterparts are heartily recommended, both titles full of quirky soul.

Oddly, the ongoing strips drag the issue down somewhat and are tougher to get through than others. Strangehaven and The Bad Bad Place in particular have both been such a mainstay in Meanwhile… that it’s becoming difficult to discern any huge leaps in their narrative development. David Hine and Mark Stafford still manage to conjure up some gruesome magic, and will hopefully continue to spread their deadly styles with Lip Hook, their forthcoming release from SelfMadeHero.

A disparate collection of reflections on the complexities of modern society with some healthy dollops of fantasy and humour-driven strips make Meanwhile… #8 a worthy addition to this curious, anything-goes anthology. The sheer variety of styles, stories, artists and writers continue to make it an anthology worth diving into, especially since Meanwhile… is infinitely keen to throw you in at the deep end.

You can discover more about Meanwhile… #8 from Soaring Penguin Press. Are you a fan of the anthology? Let us know in the comments section below or send us a Tweet!