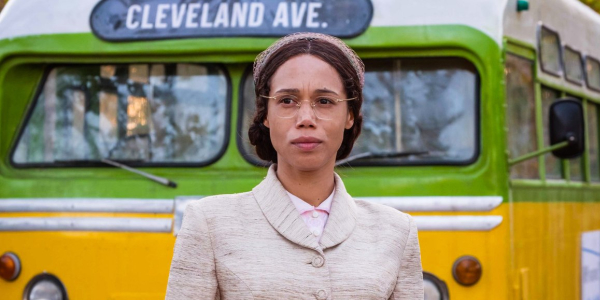 In the first historical of its new run, Doctor Who takes us somewhere it’s never dared go before.

Dropping straight out of the tempestuous new title sequence, we swoop down out of the sky and into the life of Rosa Parks (guest star Vinette Robinson), boarding a bus in Montgomery, Alabama. Having paid her fare, she’s told to exit the bus once more and go round to the rear doors – the ‘coloured’ entrance. She refuses; a brave, simple gesture of defiance. But not the one for which she’ll become known. Instead, the bus driver makes to drag her off. In the altercation, Rosa drops her purse. Bending down to pick it up, she takes a seat for a moment to recover. The bus driver screams in her face. When Rosa does concede to use the rear doors, he shuts them in her face and drives off.

Twelve years later, the TARDIS touches down in the Deep South. Its 1955, nine years till the passing of the civil rights act. In eight, the first episode of Doctor Who will air.

In the half a century since, the BBC’s flagship sci-fi show hasn’t devoted much time to tackling the prejudices that existed at the time of its inception; perhaps understandably. It’s a heavy topic for teatime viewing. It’s this that makes “Rosa”, written by Malorie Blackman, all the more remarkable in its refusal to shy away from the sheer ugliness of racism.

No sooner have the Doctor and Co. gone in search of the source of artron energy than Ryan, attempting to do a good deed by returning a dropped glove, is slapped by a belligerent Southerner and threatened with lynching. Luckily, Rosa Parks is on hand to defuse the situation; a matter in which you get the impression she, sadly, has some experience. She even evokes the memory of Emmett Till as a potent reminder of the danger posed to these unassuming out-of-towners. Anyone could be the instigator of violence against them on the smallest of pretence. Tension pervades the remainder of the episode: ‘50s Alabama is as hostile as any alien world, especially to Ryan and Yaz.

Rosa, they discover, is the focus of the phenomenon. Could it have something to do with the strangely modern-looking greaser, Krasko (Joshua Bowman), with his designer stubble and his temporal displacement weapon and his troublingly retrograde attitudes towards social equality?

To complicate matters further, it’s November 30th: the day before Rosa is due to symbolically refuse to give up her seat.  Blackman and co-writer/show-runner Chris Chibnall handle this carefully: obviously the Doctor can’t be the one to inspire her – that would be disrespectful to the real-life Rosa and her act of personal courage. Instead, the TARDIS team are standing by to ensure that history remains on track; like a reverse of Stephen King’s 11/22/63.

In this, the episode also delicately balances tension with humour. Graham in particular complains about needing regular mealtimes and ends up pitching the concept of an iPhone to a prying cop. Meanwhile, Ryan and Yaz, hidden out back behind the bins, have a serious chat about what it means to be a minority living in modern-day Britain; whether that’s as a civilian, getting pulled over by a police more regularly than your white mates or as a cop getting racially abused on the job. Everyone gets their moment to shine; from Ryan’s borrowing of a line from Muhammad Ali, answering back to a snooty waitress in a diner, to Yaz’s glee on his paying her an inadvertent compliment.

Whittaker, meanwhile, continues to add new shades to her portrayal – uncovering a steely resolve in the Doctor’s villainous encounters. She also may or may not be Banksy.

Since Chibnall took over, a mere three episodes ago, Doctor Who has become a real ensemble; less interested in the-Doctor-as-unpredictable-genius or the convoluted plotting. The time travel element here is just away to let the story play out, to get us and Rosa to where we need to be – on that bus on that fateful day.

Set to Indra Day’s “Rise”, it is suitably stunning; as Graham realises the role he must play: that of the privileged white bloke, not required by law to give up his seat.

Rosa is a high watermark in Who historicals, especially for an inaugural one – forget about Eccleston and Dickens; Tennant, Queen Victoria and werewolves; Smith, and Churchill and his “Ironsides”; a freshly regenerated Capaldi and the T-Rex in Victorian London. This one matters; in at least insofar as introducing a whole new generation of Whovians to a civil rights icon. Or two. To quote Ryan on his late grandmother: “Thank you, Martin Luther King. She’d have been chuffed to know that you said that.”

This is also the most fannish episode of the season so far, with references to time vortex manipulators (“quick and dirty time travel”) and Stormcage prison, in which River Song was once held. Why set up a new intergalactic prison when you already have one established? That’s just good economy.

What show other than Doctor Who can reinvent itself so consistently from week to week. One week it’s an educational historical; the next week, Arachnophobia set in present-day Sheffield. “Arachnids in the UK” indeed. Complete with nor-more-white-guy Chris Noth screaming in terror. God, I love this show.

What did you make of “Rosa”? Let us know in the comments section below or send us a Tweet!