Home » If Kindness Were a Disease: A Conversation with Xane Daniel, Creator of Righteous 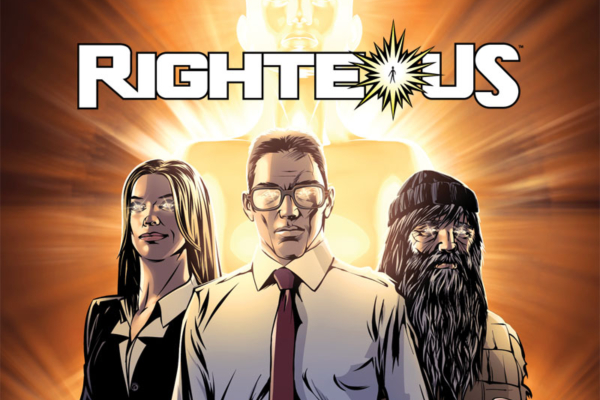 People gaining superhuman abilities after becoming ‘infected’ by a bug or virus is a well-worn trope in superhero comics, but what if you were infected by kindness? For the past two years, Xane Daniel has been producing a comic centred around that idea. Righteous takes inspiration from the greedy, corporate underbelly of this world and twisted that idea into something positive.

With nearly 10 issues under his best, Daniel is turning to Kickstarter to fund both a printing of Righteous Volume 2 and reprint Volume 1. We caught up with him to discover more about reaching this milestone.

A Place To Hang Your Cape: You’re funding Volume 2 and reprinting Volume 1 of Righteous, how has the comic evolved since its beginnings?

Xane Daniel: I was struck with inspiration – an idea that hadn’t been done before – so I took action to start the comic immediately. I had never written a comic book before, but I had been a producer in the video game industry for 20 years. So I knew a thing or two about working with incredible artists and the storytelling process. Within two weeks of coming up with the idea, I’d already hired my illustrator and he began concepts for the main characters. I also hired an editor from the comic industry to review my scripts to make sure I was doing it right. I wasn’t. At least not at first. But I received on-the-job training from her and it made all the difference. My goal was to write a comic that had the potential to change the world, and I wanted it to be as professional and legit as possible. She was a big part of that! Now things are moving quickly. We’ve gotten into a rhythm that produces a full issue every two months, and we’re rolling right along!

A Place To Hang Your Cape: What’s Righteous all about?

Xane Daniel: A greedy corporate analyst contracts a supernatural disease that forces him to help others and not make money for himself anymore. As his life falls apart — because our society is not set up for people like this to be successful — he discovers that every time he helps someone, they get it, too!

A Place To Hang Your Cape: Righteous bears quite a unique concept of an anti-hero passing on goodness as if it were a disease, where did the inspiration come from for that?

Xane Daniel: I had imagined what the world would be like if everyone suddenly woke up one morning, committed to helping others — that goodness you are talking about! I wondered what the world might look like, so I started creating one-page stories that expressed that moment of realisation from the perspectives of different people across the world. The CEO of Wal*Mart, all of congress, an office of the Red Cross, a TV news station, poachers in Africa, etc… While this was interesting, it didn’t have much conflict. The world just became a better place – literally overnight. So I decided to create a situation where it happened slowly by introducing an element of the supernatural. By having one unlikely protagonist have this experience, we got to see how he was suddenly incompatible with our world – helping us realise how screwed up our society really is! By having him pass it along to others, we could watch as giving and kindness takes over the world – and how people might try to resist it…

A Place To Hang Your Cape: What can people expect from Volume 2?

Xane Daniel: Volume 1 is the origin story. Daniel contracts the disease and begins inadvertently passing it to others while his life falls apart. At the end of Volume 1, Daniel has a realisation and he commits to “saving the world.” Volume 2 begins the second story arc, where he sets out to try to do just that. We introduce the main antagonist and establish his motivations and his tie to Daniel. A group of infected people get together to start scheming on how to make sure their “disease” gets spread. The lines of good guys and bad guys get blurred, and we have ourselves an epic story arc for Volume 2!

A Place To Hang Your Cape: Where does Righteous go from here?

Xane Daniel: I’ve written Volume 3 already, so we’ll begin that as soon as we finish Chapter 10. (January 2019) – This furthers the second story arc, developing more interlaced complexities – the first secret of the disease will be revealed, and the infected team tests out one of their ingenious schemes, while the antagonist’s team gets ramped up and develops schemes of their own! Beyond Volume 3, the second story arc has been written in outline form, and lots of amazing things happen as it spreads throughout the city…

Beyond this, we hope to keep expanding our audience, our brand, and find a way to make the comic self-sufficient. Thus far, I’ve been using my own money to fund it for the most part, but life has changed, so I need to find ways to get it to pay for itself. That will be a big focus during the first half of 2019.

A Place To Hang Your Cape: What’s been the most rewarding thing for you about working on the comic?

Xane Daniel: The people who write to me and say that the comic has changed their lives. Many tell me that they have re-evaluated their choices and make different decisions now. I recently reunited with an old co-worker and lent him a copy of the book. He had been suffering from depression and anger issues, but after reading it, his outlook on life changed in such a way that he became more self-aware and less stressed. He credits the comic to his transformation!

You can’t ask for anything more than that!

You can discover more about Righteous via its Kickstarter and the above mini-documentary. Are you already a fan of Righteous? Let us know in the comments section below or send us a Tweet!