Home » In The Tsuranga Conundrum, Doctor Who gives us Terror At 20 Trillion Feet 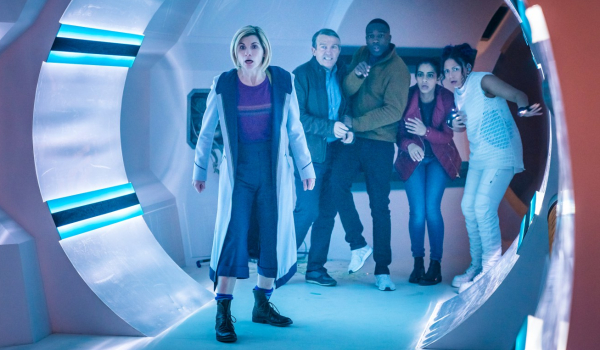 New Who continues to go back to basics in a episode that traps the TARDIS crew aboard a spaceship with an unstoppable alien and an undefusible bomb.

Having been blasted by a sonic mine while scavenging on a scrapyard planet, the Doctor and co. wake up aboard a Tsuranga medical vessel; basically the future Red Cross, en route to base. The Doctor, a bit worse for wear – her expo-spleen is resettling, which manifests, more or less, as a very bad stitch – is desperate to get back to her ship before someone scavenges it.

Medics Astos (Brett Goldstein) and Mabil (Lois Chimimba) want her to get back in bed and stop disrupting the, albeit mostly automated, running of the ship. Then again, when a deep space asteroid strike turns out to be a deadly, bug-eyed, razor-toothed alien grub intent on devouring anything inorganic in sight, it can’t hurt to have another doctor on board. To make matters worse, if HQ finds out, they’ll blow up the ship as a precaution, and there’s only so long the Doctor can keep it under wraps. So, how to dispose of a gremlin – well, technically a Pting – that you can’t kill or even touch? (Not that killing is really in the Doctor’s playbook.)

Luckily, as well as her new medic besties, the Doctor has a whole shipful of patients to call upon; from legendary military pilot Eve Cicero (Suzanne Packer), her buzz-cut man-droid Ronan (Dave Shields), and engineer brother Durkas (Doc Brown), to pregnant ginger bloke Yoss (Jack Shalloo). While the “conundrum” itself is timeless – shades of Capaldi’s “Mummy On The Orient Express” – this fourth episode of Jodie Whittaker’s tenure feels, to me, most like Sylvester McCoy – a ragtag group in a snag being forced to come together to survive an alien menace.

“Tsuranga Conundrum” has the biggest central cast of the season so far, but it also provides the best showcase for Whittaker’s new Doctor; particularly in her scenes with Astos. The Doctor’s laser-focused banter as she looks for a way off the ship, and Astos’ resigned efforts to convince her otherwise, are a real delight, given Whittaker and Goldstein’s tried-and-tested chemistry – they were both in Adult Life Skills together back in 2016.

Chris Chibnall’s script also gives the Doctor back some of her mythic status – she has a whole volume devoted to her in the Book of Celebrants – while also more her more human, more reasonable; just, well, nicer. The awed expression on Whittaker’s face, literally and emotionally aglow, as she contemplates the principle behind an anti-matter drive brings to mind the Peter Davison quote, that “For some people, small, beautiful events are what life is all about.”

Whittaker’s Doctor is one of balance: pride and humility, the little things as well as the big; candy floss and Legos; and most of all hope. The last one seems particularly important these days. Keeping with the times, Chibnall has even updated the references to: out with The Lion King and Scissor Sisters (and reportedly the Christmas special!); in with Hamilton and Call The Midwife. Male childbirth, tragic death, and lots of running down back-lit corridors. Only on Who.