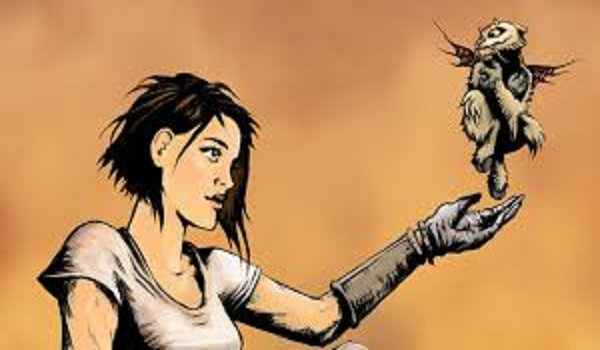 Kia Wordsmith Issue 1 (of 4) is a fantasy limited comic series by Dave West and Ian Ashcroft.  For more information about the comic, you can check out its Kickstarter page.

Kia Wordsmith is about the titular character’s life in a city that thrives on magic and science called Arrak-Al-tar.  Kia is a teenager who is naturally inquisitive by nature, which lands her in some trouble with the wizard Zak-Al after she steals something from him.  The first issue of Kia Wordsmith sets this up effectively and purposely. With only three more issues to follow, the beginning of this story is well-written and moves the plot along without having too much exposition. There are plenty of other subplots at play as well but we’ll let you read the comic for yourself to discover those.

The artwork is solid.  The coloring is amazing.  All in all, the artist really out did himself.  The art is not out-of-place and immerses you easily into the fantastical world of Kia Wordsmith.  The character designs are well thought out and interesting even if the wizard falls under the standard wizard archetype.

The world-building of Kia Wordsmith is also quite interesting.   The city of Arrak-Al-tar is very reminiscent of the classic image of any major Middle Eastern city in the early modern period.  Magic and science co-exist in this fictional city. If you know some history of scientific development, this isn’t too much of a stretch. The overall design and history behind the fictional city makes the world even more fascinating.

As for the character of Kia, we really liked this character.  The writer does a good job by not explaining everything up front about the character from the get-go, so there are some mysteries yet to be revealed about the character.  As mentioned before, Kia is curious and questioning and it is because of this that she will often get herself into unwanted predicaments.  Additionally, the relationship between her and her deceased father creates an interesting dynamic for her character development. From the few scenes we saw, she had been close to her father.  The flashbacks insinuate a death that may not have been due to natural causes, but rather, discriminatory, creating a sense of mystery. We can’t wait to see how Kia progresses as a character.

Our only nitpick about Kia Wordsmith, even though we love the premise and set-up, is that we hope it deviates from traditional fantasy stories.  There’s a lot of potential in this limited comic series and we hope the following issues are just as good.  If this story is going to have any challenges, it’s going to be the middle of the story.

Overall, we found Kia Wordsmith Issue 1 intriguing, set in a fantastical world where science meets magic.  It was a strong start to a story and it has a lot of potential.

Check out Kia Wordsmith on Kickstarter and let us know what you think.  Sound off in the comments or send us your thoughts on Facebook or Twitter!