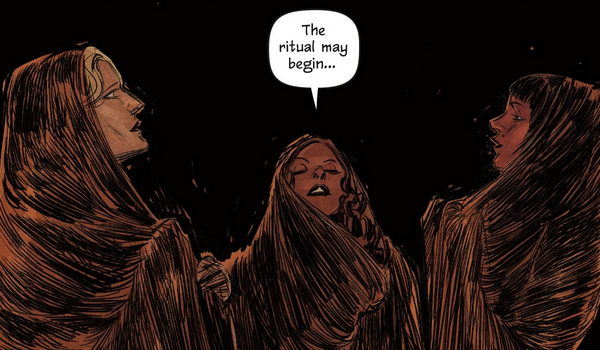 Welcome Capers to this, the most wonderful time of the year. The nights are getting long, the days cold, and the air scented sweet with fallen leaves. It’s the perfect time to curl up with something spooky and savour the delicious horrors found within. And to help you do so we bring you seven spectacularly scary tales this Halloween season.

7. Monsters You Should Know 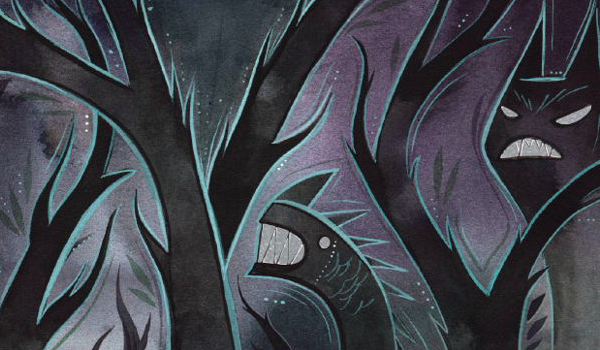 Illustrator Emma SanCartier takes us through the world’s folklore in her Monsters You Should Know. Following the pattern of a medieval bestiary each entry contains illustration and information for the monster in question. These creatures range from the frightening but friendly Enenra of Japan to the playfully deadly Eastern European Shurale to the poor American Squonk hiding away in the forest weeping over their own hideousness. Poor little Squonk. We’ve all been there buddy. SanCartier introduces each monster in just a couple pages. She has an excellent grasp of tone, pacing, and humour. She gives us just a hint of the monster’s nature before playing with our expectations between pages. Giving each beast their own charming and surprising little tale.

SanCartier’s illustrations are simple, playful, and hilarious. She gives her monsters a certain elasticity that makes them all the more alive. Rendering each monster in light watercolours to give her book a soft, misty quality. Yet despite this softness each expression is clear. Each horn, claw, and fang gracefully posed. It’s clear that SanCartier has a real love and appreciation for these strange creatures, it comes through on each and every page. These are indeed monsters you should know and SanCartier is just the artist for introductions. 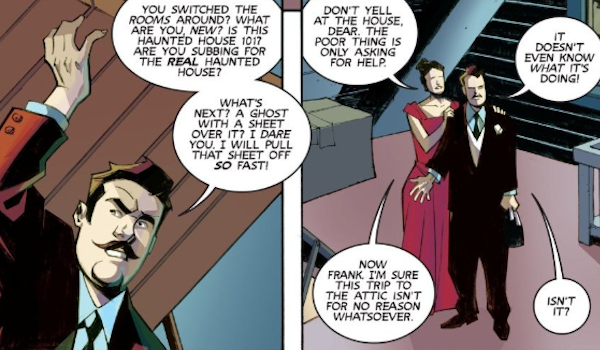 From everybody’s favorite fake old-timey radio show come Frank and Sadie Doyle: devoted lovers, lushes, and paranormal investigators. In The Thrilling Adventure Hour: A Spirited Romance we find Frank and Sadie taking care of a dear friend’s very haunted house. Herein you will find murderous dolls, ghosts with relationship issues, and ancient blood curses. Not to mention the most adorable couple this side of a magic circle. Creators Ben Acker and Ben Blacker bring the characteristic wit and charm for which the Thrilling Adventure Hour is well known. While you certainly don’t need to listen to the podcast to appreciate the book you really should if for no other reason than Paget Brewster doing Sadie Doyle’s amazing transatlantic accent.

Artist Phil Hester brings the story to life with smooth lines and graceful detailing. With characters both human and monstrous, settings both comfortable and chilling it takes a certain degree of versatility to properly serve the story. And Hester more than delivers. Whether illustrating the Doyles in their penthouse or a bizarre inter-dimensional forest Hester gives everything a sense of theatrical movement. His human figures have warmth and groundedness. Spirits meanwhile curl and twist through the world like smoke. Hester’s strongest skill is definitely his ability to move between settings and styles. So check out A Spirited Romance for humour, horror, and romance. 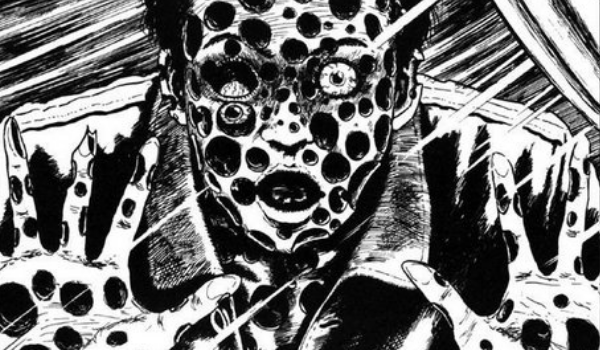 It wouldn’t really be Halloween-or a list of horror comics-without Junji Ito. And Shiver shows Ito at his grotesque best. Here we have nine of his short stories from across his career, chosen by the artist himself. Each is a striking and altogether alarming vision. From human marionettes to monstrous dreamers to what is easily one of the most trypophobia-inducing figures ever to grace a comic, each tale has something that will sear itself into your mind. And I mean that in the very best way possible. But along with the horror Ito has always been able to provide absurdity and humour in the strangest of places. Bizarre, visceral, and always engaging Ito is one of the very best names in horror.

Ito draws with clear, delicate lines, and a light touch. There’s a sense of motion and quickness to his characters, a sense of urgency. Ito also has an excellent eye for detail. His illustrations offering plenty of intricacies in which to get lost. But where he truly shines is in how he draws bodies. Of course as so much of Ito’s work relies on body horror, this is to be expected. Yet no matter how many times I come back to his stories I’m always impressed by Ito’s ability to distort the human body just so. Whether it’s a subtle twist of the neck or a radical drift of the limbs Ito’s grasp of anatomy (and how to mess with it) is sure to unsettle. 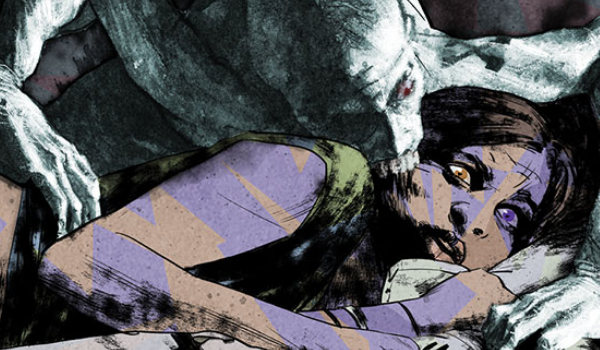 Pornsak Pichetshote and Aaron Campbell’s Infidel is a political horror story like few others. The comic follows a Muslim woman named Aisha. She, her partner Tom, and his daughter from a previous marriage Kris are moving in with Tom’s mother Leslie. But the building has seen violence. A Muslim man on the floor below had been storing explosives when they suddenly and unexpectedly went off. Now it seems something strange lingers in the apartment building. Not only does Aisha have to deal with Islamophobic, racist, misogynistic spirits she also have to deal with the prejudices of her human community, the two feeding into one another. Pichetshote handles both the horror and the political elements of his tale with grace and delicacy. The story reads naturally, easily, and all too realistically. While Infidel is certainly a topical tale for this Halloween it has a timeless horror that will definitely linger.

Campbell’s art is suitably eerie and terrifying. He’s a versatile artist and able to mix styles to put the world of humanity and the world of spirits in unsettling juxtaposition. Campbell draws the real world with loose, delicate lines. Meanwhile spirits and ghosts come with exaggerated limbs and fluid form. Their forms and colours bleed unnaturally through the rather more static reality around them. There’s a sense that they could be anywhere, that they exist just beneath our own world, that they are always lurking. They truly look like nightmares. But if the spirits don’t frighten you the ordinary people with their pedestrian hatreds will. Both are sure to stick with you long after you’ve walked away from the book. 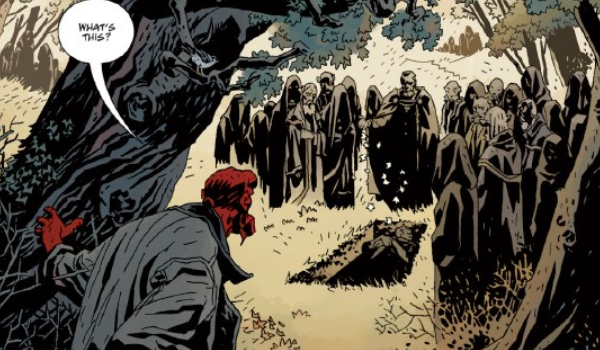 Mike Mignola‘s Hellboy can be an intimidating place for newcomers. With so many stories and series it’s a comic with a complex history. Following the adventures of Nazi-summonded-Ally-adopted-demon Hellboy these stories are deeply based in legend, myth, and magic. You can start wherever catches your fancy (as I did), but if you’d prefer more structure there’s plenty of guidance to be found online. Of course if you want to be topical you can always pick up a copy of The Wild Hunt and take it from there. Do be warned that the most recent printings come with an unsightly proclamation for the upcoming movie fixed upon the cover.

Mignola isn’t always the only artist involved, for instance Duncan Fegredo illustrated aforementioned Wild Hunt. But his artistic sensibilities permeates the entire series. Hellboy’s aesthetic is heavily stylized, with sharp angles, strong line-work, and heavy contrast. With a keen sense of visual drama and atmosphere Hellboy presents a dreamlike world, perfect for its various demons, spirits, and legends. While sometimes monstrous there’s a sense of richness and depth to the art that draws the eye along. So pick a story-line and set off into the world of Hellboy. Perfect for these dark autumnal evenings. 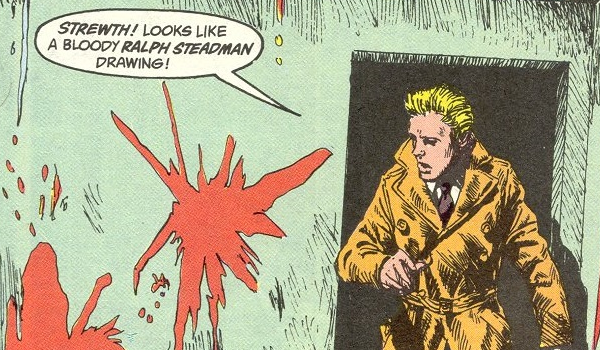 Originally appearing in Alan Moore’s run of Swamp Thing John Constantine went on to get his own solo title in Hellblazer. Author Jamie Delano was the first writer for the comic in the late 1980s. John is among the most well known names in horror comics. Brash, manipulative, and deeply kind (not to be confused with nice) John travels the world dealing with occult problems of just about every nature. Demons, angels, ghosts-Hellblazer takes it all. Indeed the comic is not just versatile in topic, but in tone. Moving from the horrifying to the hilarious to the heartbreaking but always engaging.

With over twenty-years worth of comics Hellblazer has had a whole range of artists and aesthetics. Should you choose to start at the beginning you’ll find John Ridgway and Alfredo Alcala illustrating with a characteristic ’80s style. Their line-work is complex, sketchy, and loose. And even looking back over thirty years their grasp of panel layout and flow remains fluid and graceful. But regardless of illustrator Hellblazer is going to involve lots of darkness, blood, and magic circles. Just a few of my favourite things. 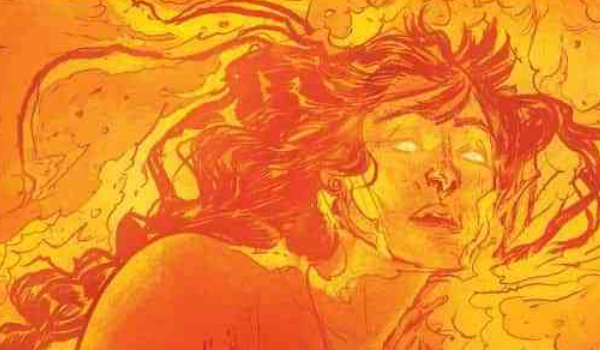 Join Jordie Bellaire and Vanessa del Rey in Redlands Florida where something wicked this way has arrived, settled, and established itself. Starting in the late 1970s before jumping to the present Redlands brings us to the sleepy Florida town under the questionably benevolent care of three witches. Bridget, Alice, and Ro are witches in the classic sense. Daughters of Satan, sacrificing virgins, and bathing in blood. It’s grim business. But they keep Redlands running. Bellaire has written the witches with a charming relationship to the town and each other. Sure, they may be brutal murderers, but they’re endearing brutal murderers and isn’t that what really matters?

Del Rey illustrates the comic with a gentle, sketchy style that gives everything a shadowy and dreamy quality. It’s very fitting in a book so based in the hidden worlds of magic. Del Ray has a beautiful grasp of gesture and suggestion, giving readers a particularly engrossing sense of atmosphere and emotion. Meanwhile Bellaire uses her skills as a colourist to enchanting effect. Fires burn with dramatic intensity, blood glows in a luminous red, inky dark waters glimmer in the dim light. With del Ray’s line-work and Bellaire’s colours both creators have given us something truly and darkly beautiful.

So here you are Capers, seven sweetly scary stories for your Halloween. But tell us, are there any other exquisite horrors that we may have missed? Sound off in the comments below or let us know on Twitter!