Home » RWBY: “Uncovered” Ramps Up the Tension As Secrets Unfold 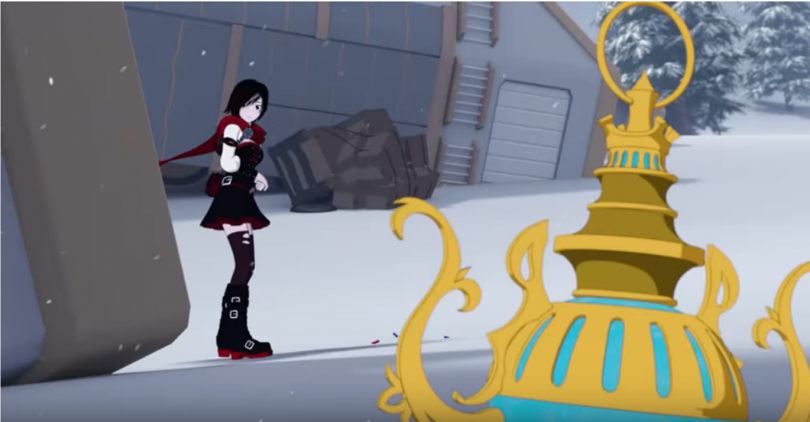 No matter how much you try to bury the past, it’ll just dig its way back out. That’s the way that the second episode of Volume 6 of RWBY chooses to take the story. It certainly makes up for lost ground, immediately deciding to answer, or at least, set up revelations about long withheld story elements. The ever cryptic and increasingly shady Professor Ozpin begins to show a new side to him, and the downside of keeping secrets for so long comes to bite back. This episode keeps up the tension and excitement right off the bat, though feels a little disjointed in what its focus should be.

Disclaimer: This review contains full spoilers for the following episode of RWBY!

Hey, Capers, guess what? Cinder Fall isn’t dead! For better or for worse, the parasitic and incredibly smug witch is back. The show’s lead antagonist was unlikely to be killed off, but I had at least thought she would’ve been “dead” for a little while before making a comeback. After her crushing and well-deserved defeat at the hands of Raven, Cinder survived, but has hit rock bottom. Crawling out from beneath Haven Academy, the faux Fall Maiden is back and she’s still managed to keep her sanity together. But not so much her savagery, as seen when a hapless Mistral civilian stumbles across her. All she wanted was to help, you psychotic woman!

Later on, Cinder, now sporting the woman’s clothes and money, ventures into Mistral’s black market. Finding she and her cohorts are wanted, Cinder goes undercover and seeks for a way to, what else, get revenge on Team RWBY. She is eventually drawn to a bar where everyone wears identical spider web tattoos. It suspiciously looks like the Spider-Man logo. Cinder meets the local mob boss, Little Miss Malachite, a Miss Piggy lookalike with a stereotypical Southern belle accent. Malachite is an information broker, and may be associated with the late Roman Torchwick.

Cinder shows Little Miss Malachite photos of Team RWBY and Team JNPR; interestingly the photos are images from Volume 3, using the old animation style. Cinder pays up money for help, sadistically commenting that they were someone’s life savings once. I do hope we learn Cinder’s backstory in this volume. What drove her to become so sociopathic? She’s based on Cinderella, so I would assume the story would be similar. Malachite tells Cinder how she rose to power, by getting all the “spiders” in town to work for her. Cinder at first guesses it was because she killed those in her way. Amusingly, she looks rather dumbfounded by the true method, since she herself treats everyone else like pawns.

Cinder buggers off to presumably wait whilst Malachite searches for Team RWBY. Malachite turns out to be quite the manipulator, already knowing where the Huntsmen are, since a “big guy” (Hazel?) asked about them a week ago. She is interested to know who in Mistral might be looking for Cinder…

Catching up with Team RWBY, well, not quite. We jump to a flashback first, as the team pre-prepare to head out for Atlas to take the Relic of Knowledge there. The gang are back in their homestead in Mistral, which Nora is thrilled to finally get out of. Aren’t we all! Their reasoning to go to Argus first is because it is a major port for Atlas and Mistral, and may allow them to travel straight to General Ironwood. They smartly come up with a backup plan to use Weiss as a way to buy their way into the country.

Ozpin limps in, healthy enough to still keep secrets and make speeches. Jaune asks exactly what the Relic of Knowledge actually does. The Relic has a wonderful design, resembling a large lantern with an Arabic style to it. Ozpin is a little hesitant to answer, but knowing the teenagers are willing to carry it, he decides it would be fair to share. If only he was so open-minded later on in the episode.

The Relic of Knowledge has the ability to answer any question asked by a person. The catch is that it can only answer three questions every one-hundred years. Ruby looks rather thoughtful about this, almost as if she had an idea to ask certain questions. Nora immediately jumps the gun and asks if the Relic can give them more questions, Ren shooting her down, since it isn’t a magic lamp. Suuuure it isn’t. Ozpin then makes it clear that he used up all the questions before he sealed the Relic away. You know it probably isn’t a good idea to lie when you share a body between two minds.

Cut to the present where Team RWBY are stranded in the snow following the train wreck. But, they did pick up a new friend – a wacky old lady named Maria Calavera, who sports some techno-goggles to make up for her blindness, and carries a really cool-looking cane with a skull on top. Maria appears to take inspiration from the Mexican Day of the Dead, judging by her look and last name. The only problem is that this old lady gets introduced, and that’s it. She is now just here, with no further focus in the episode, beyond reaction shots. She never once pipes up about what’s going. Almost as if she knows what is happening…

The conversation instead turns to who can throw verbal darts at Ozpin and hit a bullseye. Everyone is mad at Ozpin for hiding the very important information that the Relic can attract the Grimm. Things quickly grow tense when Team RWBY (sans Ruby) begin pushing Ozpin’s buttons about keeping secrets, promising they will never betray him. Ozpin doesn’t respond too kindly to that, clearly rattled by Professor Lionheart’s betrayal. And it is hinted that he wasn’t the first person to backstab Ozpin over the ages.

Ozpin notices the Relic is in Ruby’s possession and grows a bit fidgety, asking her to hand it over, claiming it is his burden. Ruby points out why he would need to cling to it when all of its questions are used up. Ozpin tries to answer, but Oscar suddenly takes over, fighting for control of his own body. Oscar gasps out that Ozpin is lying, telling Ruby to use the Relic by calling the name of someone called “Jinn”.

Ruby does so, and the snow suddenly freezes in time. The Relic floats into the sky, and out of it pops a giant blue, naked lady wearing golden chains! The Relic of Knowledge isn’t just an item, but a person! Jinn is obviously a genie, and blue, cause, well, thanks Aladdin. She reminds me of the Great Fairy from The Legend of Zelda. Jinn’s likeness appeared in Haven Academy as the entrance to the Spring Maiden’s vault. Some nice foreshadowing there, Rooster Teeth.

The ethereal but rather laidback Jinn declares she was created by the gods to answer three questions per century. She states she has two questions left, putting Ozpin in the hot spot. Old Ozzy doesn’t like it when things don’t go his way. Everyone is in utter disbelief at how far Ozpin has continued to lie. Even Qrow looks lost. Ozpin begs Ruby not to ask questions. Qrow tries to simmer things down, but Weiss, Blake, and Yang instantly turn their weapons on Ozpin. Qrow backs off and decides to let Ruby do what she thinks is best. Yeah, they are tired of being kept in the dark.

Things reach their peak as Ruby asks Jinn what Ozpin is hiding from them. Ozpin freaks out and suddenly charges at Ruby, but she is thrown into a blank white void. Weiss, Blake, Yang, Qrow, and presumably Maria are all sent into this void too, but are unable to see each other. Before all of them, a theatrical story begins to play out, focusing on a lonely tower (which resembles Beacon), which sheltered a lonely, pretty blonde girl.

And her name…was Salem!

How will this mindblowing plot twist unfold, and what fate awaits Ozpin (and poor Oscar) once the truth is revealed? We’ll have to wait patiently for the next episode of RWBY to find out.

+ The fantastic tension between Team RWBY and Ozpin, and finally seeing the enigmatic headmaster show a vulnerable side.

+ The revelation of the Relic of Knowledge!

– Cinder’s return was inevitable, but could have been held back by a couple more episodes.

– Introducing Maria Calavera but then doing nothing with her for the rest of the episode beyond reaction shots.