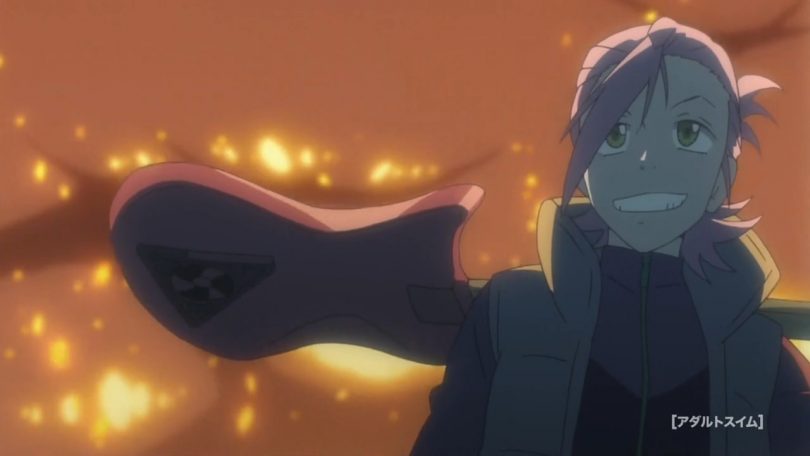 During the summer, FLCL, the zany sci-fi coming of age anime, made its return after eighteen years, with the promise of two sequel seasons. The first, FLCL Progressive, was a lackluster disappointment, with little effort involved. Maybe it was just the hype and nostalgia goggles, but it was a major letdown. Despite a promise to continue unresolved storylines, no such thing happened. The lack of character development, a cut-and-dry plot, and empty homages contributed to Progressive being a big disappointment. Thankfully, FLCL Alternative more than makes up for it. In fact, it was exactly what I had hoped for.

Disclaimer: The remainder of the review contains spoilers for all three seasons of FLCL. Read on if you dare!

Rather than being a sequel, FLCL Alternative is an alternate take on the original series. In this reality, the events of FLCL appear to have never happened, and it is even hinted to be a prequel. While there is an ongoing subplot involving Medical Mechanica as usual, the focus is on four high school girls reaching the inevitable end of their teenage years.

Kana Koumoto (Megan Harvey), is an upbeat but immature girl, aware that her time as a carefree teenager is coming to an end. In an opposite arc to Naota Nandaba, who was eager to become an adult, Kana prefers to remain young whilst she still can. She hangs out with her friends: the quiet Tomomi “Pets” Hetada (Marieve Herington), aloof beauty Hijiri Yajima (Erica Lindbeck), and overweight but hardworking Man “Mossan” Motoyama. Though they could be labelled as the happy one, quiet one, pretty one, and fat one, the four girls have great chemistry. Their friendships feel genuinely real, providing the main interpersonal growth for the season. All of them grow as people, or have deeper conflicts that come out of the woodwork over time. 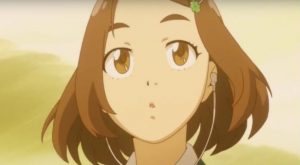 If you are wondering about Haruko Haruhara (Kari Wahlgren), well, she’s around. In a surprise move, Haruko plays a straight-faced heroic role with no ulterior motives. She is still incredibly lewd, sarcastic, and emotionally manipulative, but has a kinder edge to her. Kana possesses the ability to have robots and guitars yanked out of her head, which Haruko is after to stop Medical Mechanica. She is aided by Tsukata Kanda, a government agent, who has a history with Haruko. Haruko dances her way in and out of the story, instigating action sequences, or progressing the girls’ character arcs. In a funny way, the girls come to view her as a mentor figure or older sister. Still, Haruko pushes their buttons, symbolising puberty and teenage sexuality as she did in the first season.

In the background, there is an ongoing subplot about the elite preparing to abandon Earth and colonise Mars when Medical Mechanica’s plant inevitably activates. For those unfamiliar, Medical Mechanica are a vague extraterrestrial order that “iron out the wrinkles” of planets. This is meant to symbolise the restrictive culture of Japanese society. This is the future that Kana and her friends face, and they aren’t quite ready for it.

Kana is still very immature, and forever remains upbeat to cover her own fears that people will dislike her. She has an earnest desire to fix her friends’ problems, even if they don’t want her help. This happens repeatedly in the season, and comes to have amazingly bleak consequences in the fifth episode. Kana has to learn to vocalise how she truly feels, rather than hiding them under mostly selfish acts of kindness to appear mature.

Kana’s three friends all are pretty varied in their maturity. Hijiri acts like she’s mature, but is knowingly more self-conscious and childish; Mossan wonderfully escapes the fat jokes, and is a hardworking girl who looks to build a societal-breaking career as a fashion designer; and Pets hides deep-seeded, private anguish, that comes out raw and rough, when Kana tries steamrolling her way into her issues.

Seriously, the fifth episode of Alternative has to be the highlight of the whole season. It features a harrowing, heartbreaking series of revelations that culminate in a very realistic fallout. It revives the multilayered character depth FLCL explored eighteen years ago. Then, when it looks like the conflict is resolved, the anime kicks us in the gut in the cruellest way possible. Now, that’s good writing.

Another engaging arc is Kana’s love life. Crushing hard on the school basketball coach, Mon Sasaki (Max Mittelman), Kana is triggered by Haruko to make a move. But, when the time comes for the old “land-on-top-of-your-crush-and-kiss” trope, Kana pulls back from the brink, and decides she isn’t ready to date someone yet. This was a surprising move for the character, but also makes sense when her personality come into question. Dating someone means maturing, and Kana, still being afraid of social rejection, is unwilling to take that leap. Her decision only adds fuel to the fire once Pets unleashes her scathing, verbal beatdown on her. 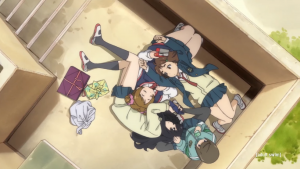 I wouldn’t say the writing is as good as the first season’s, but effort was put in, unlike in Progressive. Especially with that soul-wrecking twist, which rivals the collapse of Naota and Mamimi’s relationship, denying the hope for a compromise or understanding between friends. While Progressive had around six different directors, Alternative is whittled down to two, allowing the story to flow with better fluidity.

On the downside, Haruko and all the plot carried over from the other seasons fill a little out of place. There is a minor prod at politics, immature adults, and the elitism of Japan, but beyond that, Haruko and Medical Mechanica don’t make much impact, beyond a generic end of the world scenario, which Kana and co. react to with little concern or attention. With Medical Mechanica acting as a metaphor for Japanese social conformity, and our heroes facing such a thing, you’d have thought it would have had a bigger role to their lives.

Haruko lacks a personal motive beyond fight the badguys, popping in and out of the story to provide fight scenes and wacky shenanigans. Occasionally, she has moments of mentorship or filling the big sister role, nudging characters around to overcome personal hurdles. Again, this season may warrant further viewings to understand any deeper meanings of the story. One of my biggest gripes with FLCL Progressive was the promise of concluding unresolved threads from the original series, only to further explore Haruko’s journey. It suffered from uninteresting characters, and the absence of Naota and Mamimi stuck out.

Alternative has no such requirements to fulfil these stories, since they never happened in its timeline. In a way, this is a good thing. It lets down fan expectations gently, while Progressive went down like an anvil. Alternative manages to recreate the style and substance that FLCL, consistent with its storytelling, and has a few great moments that left me beaming. I felt even The Pillows, who provided the soundtrack, had a better role in the series, their music put to good use and fit in well with what was presented on screen. The animation was wonderful, crisp, and detailed. It felt like while Progressive was made simply for the brand name, Alternative had genuine affection and energy injected into it. Using those baseball metaphors that FLCL is known for, Alternative took a swing and hit it out of the park.

What are your thoughts on the third season of FLCL? Was it worth the wait? Leave a comment below or on our Twitter feed.