Home » Stan Was There: A Tribute to Stan Lee 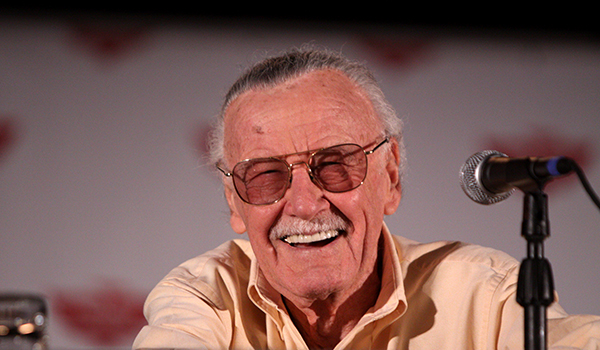 Last night, when the news came out that Stan Lee had passed, my brother texted me, saying he was sorry because he knew Stan had been “a huge figure in my life”.

Those words struck me. I’d always known the impact of Stan’s characters – hell, we all have. But what about the man himself?

The more I thought about it, the more I realised that Stan really had been there at all the important moments in my life.

Stan was there when I was a kid, narrating old Spider-Man cartoons. His voice was so memorable, I can still hear him now saying “Spida-Man”. You’ve heard it too.

Like every kid on the planet, I went through a big Spider-Man phase early on, and some have argued it never really ended. Well, you can blame Stan.

Stan was there when I was 12 and decided once and for all that I was going to study film. I was inspired by Kevin Smith’s story, how he had come up from nothing and strung together a bunch of credit cards to make a film with his friends that launched him into a real Hollywood career. The first Kevin Smith film I saw was, of course, Mallrats. And who should show up about two thirds of the way in but The Man himself, giving some advice to Jason Lee’s lovelorn Brodie Bruce.

I didn’t have to wait long to see him again. Stan was there when, at 13, I went to see a film that really changed my life: X-Men. Stan was there, in one of his early cameos, and I was there discovering just how much I was missing out by only watching the cartoons and not reading the comics.

That film sparked my love for comics, and I remember buying a book on the history of the X-Men the very next day. I loved reading the stories of how Stan had created them all, how the original five had been intended to be the opposite of the Fantastic Four (there was ice to the F4’s fire, a human monster that was eventually blue to the F4’s orange, etc).

I found it so inspiring that one guy could come up with so many timeless characters, and that the same guy could inspire me in so many different ways.

Stan was there on my first date too. In fact, I knew he would be because I’d seen Spider-Man the day before – opening day – and had decided to take my date to my second viewing. It turned out to be our only date, but I didn’t care much. I wore the fact that I’d seen Spider-Man in cinema twice opening weekend like a badge of pride.

Stan was there when I went off to college too. I made some new friends while bonding over Stan’s new TV show Who Wants to Be a Superhero? I don’t think I’ll ever forget the season finale, when the hero Feedback won. See, Feedback was like me, like all of us. He’d grown up with Stan too. He’d learned everything he needed to know about being a good person, being a hero, from reading Stan’s books and now here was Stan shaking his hand, telling him that he really was a hero. It was like Stan was saying it to the rest of us too.

Stan was there in 2008, almost 6 years to the day after the release of Spider-Man. I’d gone to an early screening of Iron Man with some friends, and of course Stan was there too, being mistaken for Hugh Heffner in his first ever MCU cameo.

I made my friends sit through the end credits because I was so on the ball that I already knew there was going to be something at the end there. My friends complained through the entire credits. We were the only ones in the theatre, because end credit scenes weren’t a thing yet. Hell, Marvel movies were only barely a thing. But when Nick Fury said the word “Avengers”, my friends went nuts and I was vindicated. Stan had already changed the world of superheroes once, and now here he was, 47 years later, about to do it again.

Of course, I saw Stan a lot after that. He was there every summer, sometimes two or three times a year.

And then, in 2014, Stan really was there. For real, in person. I had been invited to a press conference – his last UK press conference. We would actually be in the same room. To say I was excited was an understatement. But I was also worried. Everyone says “don’t meet your heroes” – what if Stan wasn’t what I expected? But the second he entered that room, my worries went right out the window.

I didn’t get a chance to ask a question, but I did get to see him speak. Stan was 91, half-deaf, and the wittiest guy in the room. He cracked jokes about wanting to meet the Queen to see if she’d make an exception and make him the first American to be knighted. I remember him as being funny and kind, exactly the kind of person you want your hero to be.