Home » Bumblebee is the Stuff that Dreams Are Made Of 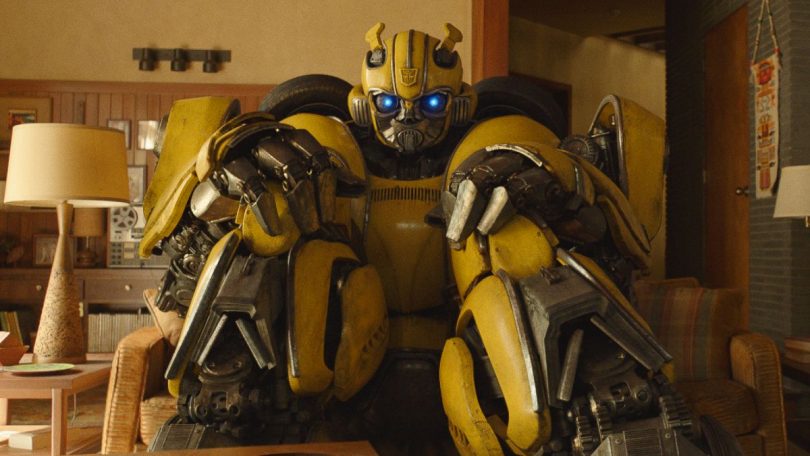 It is no secret that the live action Transformers films stink. Not even China liked them anymore by the fifth film. Michael Bay‘s managed to make each consecutive movie worse than the last, while Hasbro made plans to create a Transformers cinematic universe based on his mess. Thankfully, The Last Knight made the studio come to their senses and go back to the drawing board. So Bay got thrown out of the director’s chair, and Travis Knight was hired to direct Bumblebee. Unlike Bay, who openly derived the franchise as “stupid toy movies”, Knight is a full-fledged fan of the 1980s cartoon, comics, and toys.

So, imagine walking into an early preview screening, and actually feeling a sense of anticipation for a Transformers movie. To feel warmth, joy, and excitement for a Transformers movie! To feel something, anything, apart from a headache, is sensational. And all it took was hiring a director and a screenwriter who cared about telling a story. Aside from the 1986 animated film, Bumblebee is the best Transformers film, but that isn’t really saying much. All of Bay’s toxic traits are gone: No overblown, eardrum-busting explosions. No lewd jokes. No girls being sexualised. No wobbly cameras. No military fetishisms. They have been tossed into a black hole and obliterated.

Instead, we have a fresh, imaginative, heartwarming, and dare I say fun movie, acting as a prequel and a possible reboot to the film series. It is quieter, driven by characters than by whatever Bay imagines makes up a plot, and has simple “G1”-inspired Transformer designs. Plus, you can actually see what is happening on screen. The first ten minutes are set on Cybertron, almost like a tease for what could have been a decade ago. Bumblebee (voiced briefly by Dylan O’Brien), also known as “B-127”, is told by Optimus Prime (Peter Cullen) to leave the planet and fly to Earth. The Great War is coming to an end, the Autobots are losing to the Decepticons, and they’ll need a new base.

Bumblebee lands on Earth in 1987, where he is attacked Sector 7, led by Agent Burns (John Cena) due to a misunderstanding. The Decepticon, Blitzwing (voiced by Transformers veteran David Sobolov), ambushes Bumblebee, ripping out his voicebox, and leaves him with a failing memory core. Before clocking out, Bee scans a nearby VW Beetle to hide.

Bumblebee is eventually repaired by Charlie Watson (Hailee Steinfeld), a moody, lonely girl, who has a troubled relationship with her family. The film is set in the 1980s, and by law, all teenagers must have a shaky home life. In this case, her dad died of a heart attack, and her mum quickly remarried. For once, the stepdad isn’t a generic asshole, but a nice if goofy kinda guy. Charlie feels isolated from her happy family, and wants to fix a car to feel a sense of finality with her late father. A promising career as a high diver also died, as Charlie’s dad died whilst she was in a competition. She forms a wonderful bond with the now amnesiac Bumblebee, finding comfort and solace with him. It can’t be denied that the film takes obvious inspiration from both E.T. and The Iron Giant, down to a kid with an alien, amnesiac robot.

Most of the film is focused on the relationship between Bumblebee and Charlie, who are later joined by Charlie’s goofy neighbour Memo (Jorge Lendeborg Jr.). Memo literally walks in on the plot when needed, but makes for a good foil for Charlie. Meanwhile, Decepticons are on the hunt for the Autobots. Two in particular, Shatter (Angela Bassett) and Dropkick (Justin Theroux), get a “tip-off” and head to Earth. Confronted by Sector 7, the duo claim that Bumblebee is a wanted fugitive, and they work together to catch him. John Cena is the only one who thinks the Decepticons might be evil, cause, you know, their name is the “Decepticons”.

It was a sensible move making Bumblebee the protagonist. Aside from that time he peed on John Turturro ‘s head, Bee has remained a likeable character in these films. The similarities to both E.T. and The Iron Giant are immense, even down to the robot having memory loss. You have the child without a father, the interfering government and military forces, and even a scary moment where Bumblebee goes red-eyed and unleashes hell upon Sector 7.

Hailee Steinfeld is probably the best part of the movie. She is already a phenomenally talented actress, portraying a sympathetic and fully developed character. Which is a blessing when compared to those of Shia LaBeouf and Mark Walberg from past movies. In fact, Steinfeld’s character is the first to go through a legitimate character arc. John Cena is fun, but his character is nothing to write home about. He does lose a large number of friends to Bumblebee and Blitzwing’s messy arrival on Earth, but he seems to forget Bee was trying to protect his men during their first encounter.

The Decepticons are not well developed, but it is another breath of fresh air being able to tell them apart. Shatter and Dropkick do have basic personalities, and they are wittingly evil enough to be enjoyable. Interestingly, Megatron is never once mentioned throughout the story. If he is still frozen under Hoover Dam, then why did Burns let Shatter and Dropkick into their base? The scenes on Cybertron are an absolute blast. Shockwave, Soundwave, and Ravage appear in their classic, iconic, and simple designs, as do the various Autobots. The streamlined, G1-inspired designs make it much easier to distinguish each Transformer from the next.

Like a lot of films set in the 1980s, Bumblebee has a catchy soundtrack of various songs that lyrically relate to the story, mostly used for comical effect. There are a couple of surprises for fans that will bring some smiles and cheers. The movie isn’t bursting with as many easter eggs and lore references as I had liked, but that’s alright.

It serves as an experimental trial-by-fire for the franchise’s producers to see what new direction to take Transformers in. And it works superbly. Just keep Michael Bay locked up in an inescapable metal box at the bottom of the sea, and we should be fine. The question is will this serve as a soft reboot, or as a prequel to a film continuity that makes no sense?

What do you think about Bumblebee? A wonderful new revival to the Transformers film franchise, a sting that comes too late, or are you an avid Bayformers fan that just wants more explosions? Leave a comment below or on our Twitter and Facebook feeds.