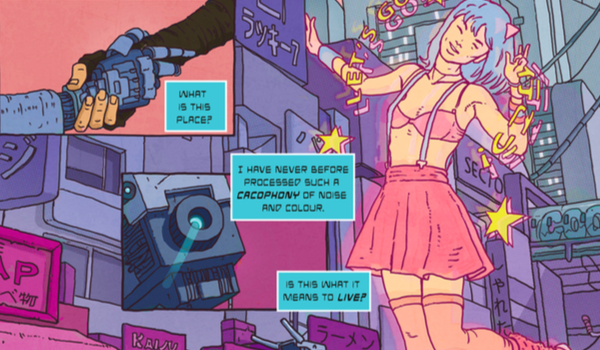 It can be all too easy to imagine dystopias, especially these days. Dreary anonymous crowds, heavy skies, and the slow crawl from despair to oblivion. However it seems Dave Cook and Craig Patton have some other ideas. Their dystopia is one of candy-colored ultra-violence. The world of Cook and Patton’s Killtopia is one of heartrending economic disparity, ruthless exploitation, and practically omnipresent mass-media. Imagine.

It’s a world where robots (colloquially known as “mechs”) have somehow broken free from the limitations of human control. These mechs use nanotechnology to grow strange blue plants for fuel. But when people happen to breath in said nanotechnology the microscopic machines turn their talents upon their unfortunate hosts. The end result is a degenerative disease known as the Rot. Thus we come to a city suffering not only from an economic crises but a public health one.

It’s in this rather grim setting that we find Wreckers. Somewhere between mercenaries and reality TV stars Wreckers go after these rouge machines. In return they find wealth, fame, and glory. And periodically these Wreckers get to hunt one another in a lethal-and very popular-festival. And so we enter the world of Killtopia just as Wreck-Fest X is about to start. It is very clearly the social event of the season. And it’s in such a world that we find out protagonist, Shinji Kamiya, an unlicensed Wrecker. 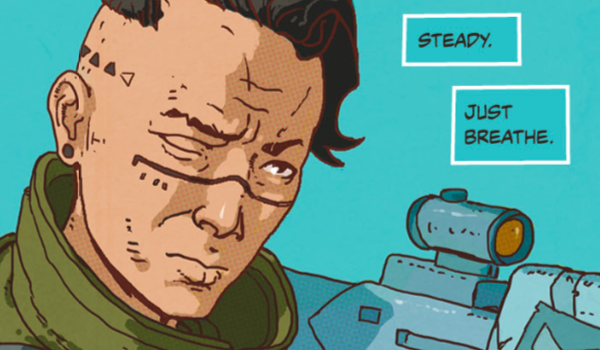 When we first meet Shinji he’s hunting down one of these mechs when a legal (and quite successful) Wrecker/rapper by the name of Dr. Scratch arrives on the scene. But Dr. Scratch isn’t interested in Shinji’s quarry, rather he’s after a humanoid mech, a rarity in Killtopia. And even more significant this is talking mech. Where other robots are animalistic and completely unable to communicate this one is undeniably sentient. It’s an entirely unprecedented situation.

But in the few moments the mech takes to speak, Shinji realizes the machine’s potential. Shinji’s sister Omi is infected. At the moment there’s only an expensive treatments to keeps the Rot at bay. No one can figure out how to change the nanobot’s programming. Shinji reasons that with the sentient mech (whom he later dubs Crash) as a translator human programmers may finally have a chance to cure the disease. But first he needs Crash, though in the end it’s Crash who saves Shinji, killing Dr. Scratch in the process. From here, Killtopia’s raucous tale of violence and drama collide together in a vibrant style, yet it rarely lets up from Shinji’s desperate situation.

Yet dismal though it is Cook writes their tale with a wry sense of humour and levity. Wreckers are flamboyant, with elaborate themes and personas (the most popular being Stiletto, a Wrecker with a penchant for wickedly powerful whip-swords). Mass media is alarmingly enthusiastic and disturbingly cheery. The city itself is a mass of wild skyscrapers, bustling crowds, and brilliant holograms. This is a delightful vision of dystopia. 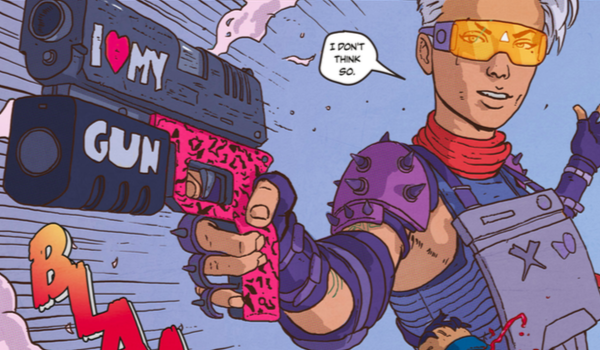 Cook is at their best when showing their world through satire and humour. There’s an irreverence and almost manic joy woven through their brilliant dystopia, with cheeky nicknames, clever adverts, and general absurdities. For instance folks selling their scrotums for Wreck-Fest tickets. Of course this also immediately raises the question: for what exactly people are buying these used scrotums, but moving on. Bleak though this world is, it is never dull. Indeed one gets the impression that Cook has had a whole hell of a lot of fun in writing Killtopia.

My only issue is that some of the quieter and more sincere moments can come across a little superficial. While Shinji and Omi have a sweet relationship their interactions can come across a little stilted in the same comic that so boldly asks “Is that boner in your pants about to burst? Are your tits stiff from excitement?” over the thought of Wreck-Fest X. Of course we’re only one issue in, so there’s plenty of time to adjust for varieties in tone. Overall Cook’s dialogue is fluid and natural.

The narrative excitement extends to Killtopia‘s art as well. The same playfulness of the writing comes across in Patton’s visuals. Wreckers have stylish costumes and weaponry. Every splash of blood and clump of viscera is so bright as to be almost crystalline. And the city itself is a brilliantly colourful cyberpunk dystopia. Patton’s cityscapes are probably the most beautiful part of the comic. Their style reminds me strongly of Promethea, Transmetropolitan, Blade Runner and The Fifth Element. There’s the same overwhelming sense of light and movement, the same wild use of form and contrast. Yes, it’s hopeless world of poverty and disease, but damn if it doesn’t look like a fun place to spend the weekend. 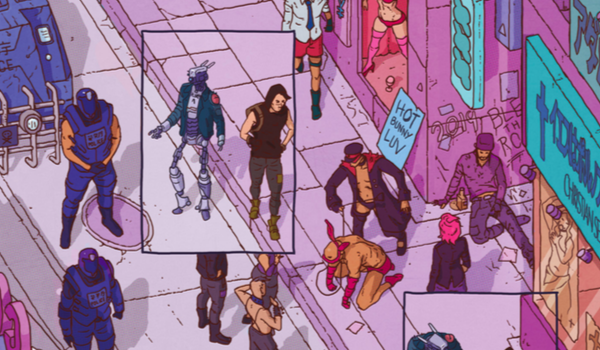 While characters can occasionally come across a little stiff this is a relatively rare occurrence. Furthermore it only seems to be an issue in moments of stillness. Luckily this is in and of itself uncommon. By and large Patton’s art is lively, wild, and dynamic with a sophisticated grasp of layout and flow. There’s also much to be said about the coloring. So much of Killtopia’s visual style is in it’s brilliant colors. Even the slums come in pastel purples and electric blues. Meanwhile scenes of hyper-violent bloodshed are awash in bubblegum pinks and chill lavenders. It’s a surprising and jarring visual. Think of the aforementioned Transmetropolitan by way of Lisa Frank. It’s really delightful.

Even that hyper-violence becomes almost humorous in context. I really can’t stress enough how over-the-top these murders can get. Stiletto kills someone with her extendable whip-sword. In the very first pages we see a man literally sliced in two. And in the background of the Saitoh headquarters a cherry red robot casually dismembers a prisoner. All done in the exaggerated style and cheery colours of a classic Saturday morning cartoon. Or maybe a rave. The effect makes for a lighthearted and attention grabbing read.

And it’s that attitude that is Killtopia‘s greatest strength. Cook and Patton have created a soul-crushing world yet they manage to keep things vibrant, lively, and above all engaging. There’s a sense of joy and entertainment that is downright infectious. I found myself grinning almost maniacally during pages and pages of Wrecker battles, dangerous mechs, and crushing exploitation.

So come join the Killtopia dystopia if you’re looking for robots, cyperpunk mega-cities, some ultra-violence, and a whole lot of fun.

Have you read Killtopia? What did you make of it? You can discover more about Killtopia from BHP Comics. Let us know in the comments section below or send us a Tweet!