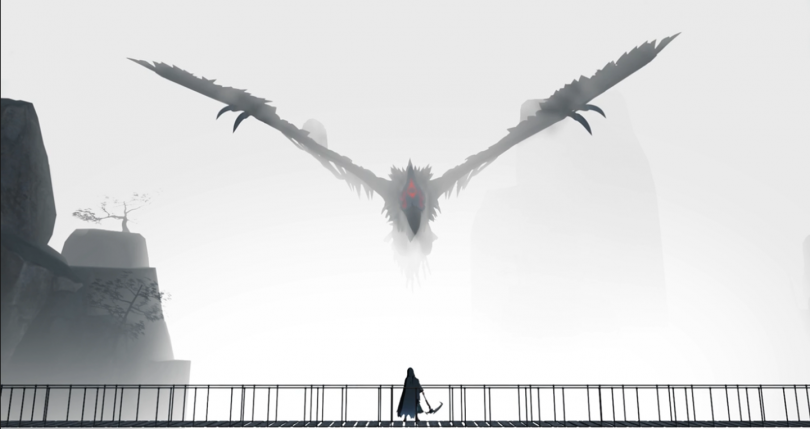 Following last week’s absolutely spine-chilling episode, RWBY reaches the halfway mark of Volume 6. It has been one heck of a wild ride. “The Grimm Reaper” gives us one more thrilling turn, before settling into a quiet rest stop for our heroes. This episode surprises us with revelations, plots of revenge, and most joyfully of all, reunions and relatives.

Ever since her first appearance in the Volume 6 trailer, the character Maria Calavera was suspected to be a Silver-Eyed Warrior. The old lady finally confirmed this at the end of “Alone in the Woods”, enabling Ruby to weaponise her own special eyes. This episode explores Maria’s backstory, but before we get to that, we have to catch up with our newest evil partnership.

In a short scene, Cinder and Neo plot on how to get revenge on Ruby. Cinder tells Neo she is forbidden by Salem from killing Ruby. The faux Fall Maiden is rather irritated by this ban, and instead suggests that Neo do the slaughtering. The Relic of Knowledge must also be acquired before it is locked up in Atlas, in order to win back Salem’s favour. Neo promptly agrees with a silent handshake. Another plus is for the animation when Cinder melts her dagger into molten metal.

We then take a trip back in time to explore a slice of Maria’s past. In a foggy canyon, a young Maria, resembling the Grim Reaper, sports a skull mask, and walks along a rope bridge. Maria does appear to be inspired by Death, but is likely closer to La Calavera Catrina, a Mexican personification of Death, and the icon of the Day of the Dead. Her skull mask certainly matches this.. There is an amazing cinematic shot where a giant Nevermore Grimm emerges from the fog, flying towards Maria. She whips out two identical scythes that are empowered with gravity dust, allowing her to kick the bird’s ass.

I love the designs of the twin sickles, the dust allowing her to magnetise both weapons to each other. Maria gets a little in over her head and uses her Silver Eyes, petrifying the Grimm and killing it. But, her troubles have only just begun. No sooner has she killed the Grimm, that a gang of assassins appear to do her in. They are led by a woman named Tock, a fascinatingly-designed character, who is based on the crocodile from Peter Pan. A crocodile Faunus, complete with razor sharp teeth, Tock looks like she crawled out of Gotham. Speaking with a very punctuated British accent, Tock claims Maria will be dead in sixty seconds, winding up an alarm clock for extra effect.

Maria puts up a good fight, but Tock blinds her with a stroke of her cutlass. You even see Maria’s eyes bleeding! Damnit, RWBY, stop being so awesome! Tock mocks Maria, revealing she is actually working for Salem. A defiant Maria uses her sickles’ gravity dust to stab Tock in the back, and then is implied to have taken gator gal’s head off. Shame as Tock displayed a lot of depth in the two minutes she was on screen.

We return to the present, where the elderly Maria narrates to the disturbed Team RWBY. Qrow is particularly gobsmacked, identifying Maria as the “Grimm Reaper”, a legendary Huntress. He even based his weaponry off her own, so in a way, Ruby did too. That’s a nice little connection there. Destiny pulled Ruby and Maria together, and in a way, Ruby’s mother Summer Rose as well, also a Silver-Eyed Warrior. Hopefully, they will finally answer what happened to her somewhere down the road.

Qrow expresses his admiration for her, but Maria shoots down his impressions of her. Maria expresses her own shame at having given up on protecting others after losing her eyesight, even after her surgery for her groovy goggles. However, Maria does compliment Yang’s strength, both having lost a part of themselves to the battle against evil. Maria further compliments the children on taking a stand, saddened she didn’t do more.

Ruby immediately suggests she still can, asking her to help her master her silver eyes. Maria looks willing to help, but Ruby gets an unexpected phone call… from Jaune! Hallelujah, Team JNPR are back! Jaune (or “Vomit Boy” as his phone contact says) confirms his team and the train made to Argus. Realising they have a signal, Team RWBY zoom up a huge hill and finally reach the walled city of Argus. Hooray!

Jaune, Nora, and Ren make their welcome return, with hugs all around, including a moving reunion between Ruby and Jaune. The group set off into the huge city, which takes direct inspiration from San Francisco, but with an Asian style to it, and in a colder climate. Like if the Northern Water Tribe went on holiday to San Fransokyo from Big Hero 6. Jaune, Ren, and Nora exposit a bit about the city’s history, as we get glimpses at all the details, including a theatre promoting a film called “The Fall of Beacon”. Typical Remnant Hollywood…wait.

The group disembark in the street, Oscar asking Jaune where Team JNPR have been staying. And here is where we meet, believe it or not, one of Jaune’s many siblings, his big sister Saphron. Ruby’s freakout is just adorable. At the family home, we meet Saphron’s wife Terra Cotta and their adorable baby son Adrian. Terra compliments the Huntsmen, particularly Qrow, on protecting the people. Qrow starts babbling when Terra questions why he has children helping, but Ruby shuts him with food.

The gang couldn’t be more happier to finally have a chance to relax. Terra has to take an important phone call, Saphron explaining the military’s relay tower is on the fritz, and they are blaming Terra, a technician. Ruby makes it clear they plan to reach Atlas and hope the military will grant them access to go. Jaune then claims that his team already tried that option. Cue Team RWBY trying it themselves and having the base’s gate slammed shut in their faces. Looks like things aren’t going to be as easy as they had hoped.

Overall, this is another good episode. Maria’s backstory wasn’t as thorough, but it’s better than nothing. I’m looking at you, Cinder Fall. Tock was a sinister villain, and I would like to see her again perhaps in more flashbacks. Unless she somehow can survive losing her head. And, aren’t Jaune’s relatives just the best?

+ Maria’s backstory could have been a little more explored, but it was adequate enough. Tock and that shot of the Nevermore flying towards Maria were highlights.

+ TEAM JNPR IS BACK!

+ Saphron and Terra are going to immediately be fan favourites for a long time to come.