Home » Straddling Between a Warning and a Celebration of Technology, I Feel Machine is Coolly Evocative 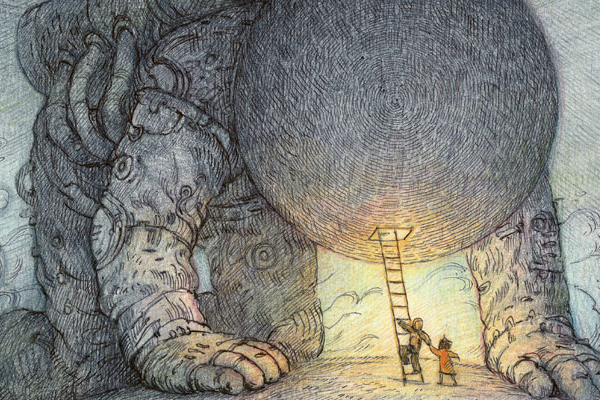 It’s a timely coincidence that SelfMadeHero’s digitally-themed I Feel Machine anthology should be published the same year as revelations of the buying and selling of social media data used to influence international elections have come to light. The comic describes itself as both a celebration and a warning of our growing intertwined relationship with technology, yet the comic feels as though it carries the former far more than the latter. Editors Krent Able and Julian Hanshaw bring together six bespoke examinations on how technology has impacted our lives.

Two futures, an alternate reality, a far-flung world, a dystopia and a cold-blooded nightmare depict the integration of technology in our society in engrossing, surreal fashions. Box Brown‘s Uploading kicks the anthology off in suitably quirky fashion, its tale of humanity discarding their physical forms in favour of uploading themselves into a digital world celebrates and is cautious of technology’s growing influence on us. Brown’s depictions of human beings so immersed in digital landscapes that they don’t even use their human forms anymore is chilling, yet it’s played subversively by warm colours.

As I Feel Machine progresses however, further inspection reveals Uploading to be one of the sweeter, more delicate stories of the comic. Erik Svetoft‘s STHLMTRANSFER carries Box’s themes of integrated technology into a noir detective setting. Despite a visually compelling execution, it doesn’t succeed in saying anything different from Uploading. Despite this, Svetoft crafts a stunning world for his story to inhabit. A near-wordless narrative propels this moody crime drama along to an engrossing climax. 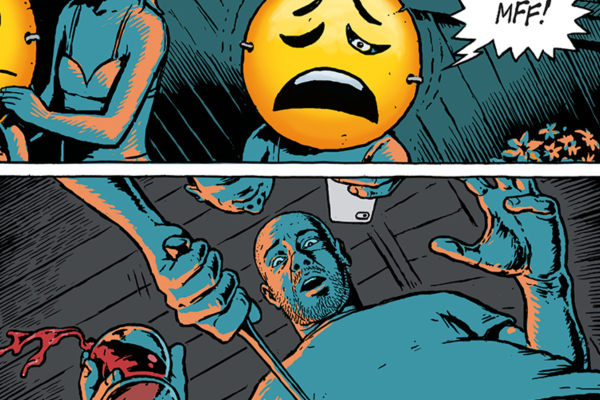 Shaun Tan‘s Here I Am is infinitely gorgeous, but perhaps has the least to do with technology. It’s deceptively innocent tale of a little human girl living on a world of freakish monsters, who’s convinced herself that this is her family, is given a subversive flavour when a human boy arrives from the stars. The subversion rides high throughout the story as the little girl rejects the boy’s claims that she’s from his world, thus rejecting his world of technology, yet utilises her own to trick the boy into accepting his wishes. It’s a sweetly-natured, unobtrusive affair.

Fledging comics superstar Tillie Walden brings her sublime aesthetics to I Feel Machine with Contours. She brings a visual splendour to her story of social media-based tech morphing from tangible objects into the very atmosphere we breath. Contours displays a nimble, elegant experimentation with its panel structure, as this tech-induced climate smothers its two young protagonists. It’s as if the pages themselves are the only things holding this warped reality in place.

Hanshaw’s Be Little With Me is undoubtedly the strangest of the six tales featured here, and the most difficult to penetrate. Set in a visually arresting world where all appear to lookalike, the gentle, inquisitive Seppy spends his days with his beloved chicken and a projector able to show alternate realities. Seppy’s own perspectives are soon warped themselves when a beer with a stranger rapidly escalates into a violent affair, but this strip’s ideas feel muddled and overly-complicated. Hanshaw’s curious tale feels as though it’s offering a comment on our perception of reality, but its dense story-telling makes it difficult to confirm this. Still, his evocative artwork is beautiful to see unfold. His depiction of architecture as Seppy displays the abilities of his projector in a cool, dusky atmosphere is sublime. 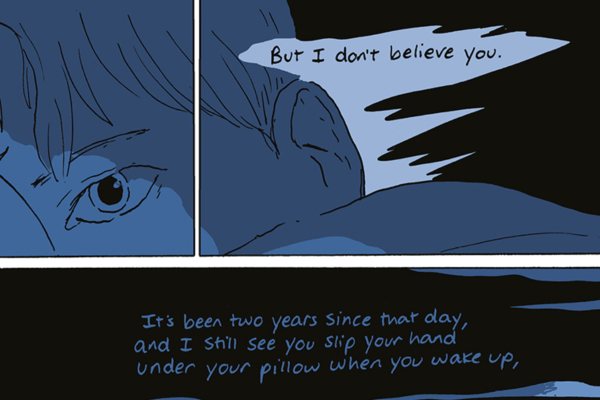 Able‘s magnificently horrific Bloody Kids captures I Feel Machine‘s overall message at its bleakest. It’s a rather literal interpretation of the deadly side-effects of humanity’s obsessions with technology, as a family retreat turns into a bloodbath. It’s the least subtle of the comics, which perhaps explains why it’s the final strip featured in the anthology. Its themes of young children easily led astray by anonymous powers from the internet is turned alive in vigorous fashion by Able’s gruesome artwork, especially when acts of violence and a creeping, unknown horror collide in a secluded setting.

I Feel Machine can be digested as either a warning or a celebration, but it doesn’t succumb to being a passive comment on our growing integration of technology. It’s contributors offer up some complex feelings over ethical and moral dilemma of how far we’re willing to take our technological obsessions, the end result being one of SelfMadeHero’s standout releases of 2018.

You can discover more about I Feel Machine from SelfMadeHero. Have you already read it? What did you make of it? Let us know in the comments section below or send us a Tweet!