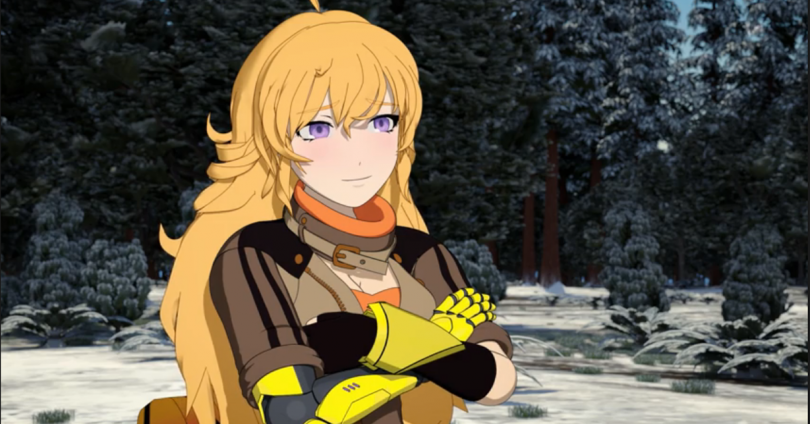 Episode ten of RWBY’s sixth volume, despite feeling like half an episode, manages to build up an exciting if flawed heist. Last episode, Jaune suggested that the gang should steal a military aircraft and fly it to Atlas without detection. As ludicrous and dangerous a plan as it is, Team RWBY decide to go along with it, being the only option they have. So, “Stealing From the Elderly” is a heist episode that goes about as well as can be expected. I am not saying the episode is bad, but rather an in-universe example of how not to execute a risky heist.

The plan is simple. Weiss begins by informing Commander Cordovin that she will return to Atlas, bringing her suitcase with her. Saphron and baby Adrian have also come as well too. Naturally, it is to cause a distraction so Weiss can sneak Maria, who is inside the case, onto the airship. But, it seems a little weird Cordovin would let a Mistral civilian and their child onto Atlesian soil. Adrian kicks off the distraction with an ultrasonic cry, the hilarious Atlas guards racing to calm the baby. Still, Cordovin is smart enough to notice something feels a little off. After taking off, Weiss and Maria chuck the guards out in a parachute, and pilot the aircraft.

So far, so good, but now it is Blake’s turn to disable the relay tower so the group can fly out of Argus without detection. Yang escorts Blake, who is the only character with experience in sabotage. Everyone is mostly waiting around for Weiss and Blake to do their parts. Qrow remains unenthusiastic about the plan, and as suspected, things soon start to go wrong.

Blake’s radio goes silent, and the relay tower is not disconnected. Maria attempts to get past the security forces by speaking in military jargon. Impressively, Maria’s phrases are actually used by real life air forces. You’ve got to hand it to the showrunners for researching these sort of things. Unfortunately, while Maria got the jargon right, the comms operator knows she isn’t a pilot – because Atlas doesn’t recruit old ladies as pilots. Cordovin realises Team RWBY are stealing the aircraft, only to get into another argument with Maria. Rather than attempt to remedy the situation, Maria only makes it worse by taunting Cordovin’s authority over the radio.

Being a walking blunderbuss, Cordovin doesn’t take kindly to Maria insulting her authority. Rather than be professional and sent a military unit, Cordovin goes to the extreme and goes after Team RWBY herself – by piloting an gigantic mech-suit. Presumably meant to be a last defence against an attack, Cordovin’s insane pride proves how far she will go to punish anyone who questions her position. But, she isn’t the only one who has a psychotic vendetta against our heroes.

As for Blake, well, only word needs to be used to describe her situation. Adam. Yes, those glimpses throughout Volume 6 weren’t mirages. Blake’s psycho ex-boyfriend has been hunting Team RWBY across Mistral, and only now when Blake was alone did he decide to strike. Blake is not pleased to see Adam, but this time won’t runaway, telling him to let go of the past. Adam freaks the hell out about this. This could be interpreted in two ways. One, he thinks Blake is rejecting their past and their time in the White Fang. The second feels more like something an obsessive stalker would do. Blake is an abuse victim after all, and has gained her independence, something which Adam doesn’t like.

Also, he is now sporting a blindfold, which really doesn’t look like he can see through it. Even Adam has embraced the Bird Box craze. Maybe we’ll get lucky and he will take on the Bird Box “challenge” and walk right into Yang’s fist. Speaking of Yang, she realises something is wrong and races off to find her kitty cat. We have been building up to the inevitable confrontation between Yang and Adam. And, hopefully, Yang will be able to overcome her trauma and go Mortal Kombat on his ass!

And, then, Bumblebee will officially become canon, and any naysayers shall cry tears of despair! Or, something really bad will happen, and my favourite pairing will be shattered into a thousand pieces again.

+ Blake and Adam’s reunion is as tense and dramatic as it should be.

+ Extra points for the military jargon.

– I still feel this plan is incredibly risky.