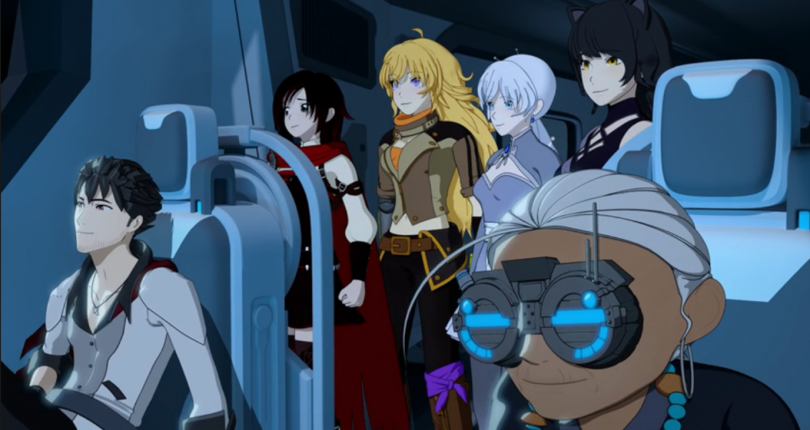 And here we are, dear readers, the final episode of RWBY Volume 6. After two rather clunky seasons, the sixth volume has been a stupendous ride. Tears have been shed, asses were kicked, minds have been blown, and hearts have shivered. Now, the finale has arrived, and it is a rather low key one. That isn’t necessarily a bad thing, and I suppose it doesn’t have to be huge, after the past couple of exciting episodes.

The episode begins with the set up for Cinder and Neo’s comeback as big bads in Volume 7. Neo has acquired a Mistral airship, and uses her advanced illusions to disguise it as an Atlesian patrol aircraft. Both Cinder and Neo sport new outfits, though neither look particularly suitable for Atlas’ cold environment. Then again, most of the clothes Team RWBY wear look thermal.

Speaking of our heroes, after dismantling Cordovin’s mecha, Team RWBY have caused an army of Grimm to appear outside Argus. Not to mention taking out the one defence that could’ve stood a chance against the Grimm. But, being Huntsmen, our heroes leap onto their getaway airship and go to engage the enemies. Cordovin angrily rages, but it looks like she acknowledges that the fault is hers to share. Blake and Yang recover from facing Adam, Ruby glad they are safe. Maria suggests they could use the Grimm’s presence to fly to Atlas, but Team RWBY aren’t going anywhere.

Ruby has one idea to use her Silver Eyes to take out the Leviathan, the enormous Godzilla-esque Grimm leading the charge. Atlas use their defences against the Leviathan, but its flamethrower nerfs them. Ruby commandeers the radio and tells the military of their plan. While the Atlesian forces agree to the plan, they will not aid Ruby, since Cordovin labelled them enemies. While the others provide some cover, Ruby boards one of Weiss’ summons and flies to surprise the Leviathan and petrify it.

The volume has been building up to the moment where Ruby can use her powers without a tragic trigger. This may sound strange, but her mastering of it is, thankfully, not easy. A lot of shows have a character master an ability instantly, but Ruby needs time and focus to activate her ability properly. She follows Maria’s advice to think of her loved ones, depicted through gorgeous hand-drawn stills of classic moments from the early volumes. But, Ruby’s memories turn dark and sad, remembering the pain her friends went through, and the deaths of Pyrrha and Penny. This distracts Ruby, allowing the Leviathan to sneak up on her. Not exactly sure how a giant monster sneaks up on someone though.

Ruby panics and summons Jinn, the spirit of the Relic of Knowledge, to temporarily give her more time to use her Silver Eyes. Jinn accepts Ruby’s misuse of her power, but warns her that she won’t help her again, unless it is to answer a question. Ruby takes the slowing of time to properly focus her abilities, thinking of warmer memories. And what is the last vision she has? Why, it is our first proper look at her mother, Summer Rose! Could this be a set up for a larger role for Ruby’s missing mum next volume? Well, it’s just showing how much Ruby loves and misses her mum, and the inheritance she received from her.

Another epic song from Jeff Williams and Casey Lee Williams kicks in as Ruby unleashes her might, and petrifies the Leviathan. It is a brief moment of victory, as the Leviathan breaks free. Ruby isn’t as strong as say Maria was, so it is understandable that the beast would break free. Luckily, Commander Cordovin storms in with her now one-armed mecha, having come to her senses. Her mecha whips out a drill and tears the Grimm apart. Yes, Gurren Lagann references for the win!

Ruby apologises to Cordovin for her actions, but the diminutive commander hints that now is the perfect time to head for Atlas in all the chaos. The gang fly off for their next destination, ready to rest and recover. Blake and Yang have a tender moment together. Whether or not you see this as a confirmation of Bumblebee, or ship-baiting, it is a natural development in their relationship. Both holding hands as a sign of love and relief, and unity against Adam.

Everyone goes to congratulate Ruby for her insane stunts, but she tries to shift the focus to Oscar for his miraculous airship landing. Oscar then reveals that Professor Ozpin temporarily returned and taught him how to land the ship. Looks like our favourite shady teacher is still keeping an eye on things.

Qrow announces they have arrived at Atlas, and we get our first proper glimpse at the militarised kingdom – make that a militarised kingdom that exists on a floating island! What did Knuckles hire out Angel Island? Nah, it is likely they use either advanced technology or gravity dust to keep the kingdom airbourne. Below the island is a dingy city, presumably the former capital Mantle, now a cesspit for Faunus under the thumb of the Schnee Dust Company. Worst still, the people of Atlas have quite literally built their kingdom to be above the Faunus.

Weiss looks on with a look of dread as the Atlas air fleet come into view. The gang realise the military are set up like they are expecting an attack, whilst an officer over the radio welcomes the ship home, almost like they were awaiting Team RWBY to arrive. It is possible General Ironwood received Qrow’s letter, or we’ll find Weiss’ family awaiting them. But, we aren’t going to find out until this fall when Volume 7 presumably comes out.

After the end credits, accompanied by Casey Lee Williams performing the song “Nevermore”, we get a tease for Salem’s next stage of her plan. Emerald, Mercury, and Hazel watch with dread as Salem adds wings to some newly born gorilla Grimm, effectively making flying monkeys. Presumably, Salem is going to take matters into her own hands, and send her flying apes to crush Atlas’ forces. As she once said, there is no victory in strength, and that’s what Atlas strives in. Dr. Watts and Tyrian will do their work, and the Grimm will finish off Atlas. Or at least, that’s what I am theorising will happen.

+ The battle against the Leviathan was low key and Ruby’s struggle to use her Silver Eyes was perfectly natural.

– Will the cast please purchase some new clothes suitable for a cold climate!

What did you think of the finale of RWBY Volume 6? Did you love or hate this volume? Leave a comment below, or on our Twitter and Facebook feeds. RWBY can be watched on Rooster Teeth’s website.