Home » The Adventure Zone: Here There Be Gerblins Is An Awesome Actual Play Adaptation

The Adventure Zone: Here There Be Gerblins is an adaptation of the first arc of the most well known actual play podcast The Adventure Zone. As someone who binged all 69+ episodes in a month thanks to the urging of my college roommate (and then recently binged all of it again in one week), I was incredibly excited to hear they were branching out into my favourite media format with this adaptation. I pre-ordered the comic pretty much immediately after finding out that it was happening.

While the podcast features the McElroy clan of My Brother, My Brother, and Me, Polygon, and much more, patriarch Clint McElroy wrote this adaptation with art by Carey Pietsch. Clint has a background in writing comics, including issues of Freejack, Universal Soldier, and Blood is the Harvest. Carey Pietsch also has a history in the comic world, having drawn for Lumberjanes, Mages of Mystralia, and Keepsakes.

For those who have not listened to the podcast, The Balance Arc of The Adventure Zone is set in a Dungeons and Dragons Fifth Edition-inspired world starring Magnus Burnsides (a human fighter), Merle Highchurch (a dwarven cleric), Taako (an elven wizard), and Griffin McElroy, the DM who pops in occasionally. Taako, Merle, and Magnus are hired by Merle’s cousin to bring supplies to a mine for a mysterious job that will be the job to end all jobs. After realising that Merle’s cousin and his bodyguard Barry Bluejeans have been captured, the trio, lovingly nicknamed Tres Horny Boys, must save their employers and unravel the mystery of the Lost Mine of Haverdale. 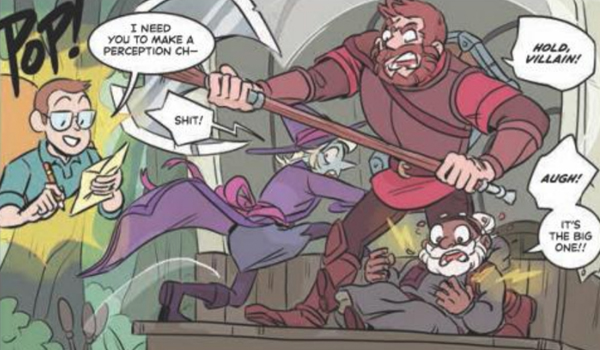 Merle, Taako, and Magnus are extreme exaggerations of the typical D&D archetypes, though they are all terrible at their jobs. Merle is forgetful and tends to attack or cast Zone of Truth rather than healing, Magnus will plow right into a problem while also being the most tactically minded and Taako will just do whatever he thinks makes himself look good and yield the most loot that he can horde for himself. Griffin will pop in to add a bit of commentary to the situation or clarify what the team can and can’t do. The comedy is a mix of their incompetence, the human qualities of their enemies, and pop culture references.

When trying to adapt a podcast to a visual medium, the designs of the main characters are hardly ever agreed upon by the cast or the fans. The basic themes between every interpretation typically includes Magnus being tall, buff, and red/brown hair with a scar over one eye. Merle is short with a beard and his Extreme Teen Bible. Taako typically has a wizard hat but past that there is no consensus on what he looks like. By far Taako is the most hotly debated design, with art depicting him with different hair, sizes, body types, skin tones, and outfits. Justin McElroy, who played him on the podcast, once joked about wanting to see Unbreakable Kimmy Schmidt star Tituss Burgess play Taako in a live action adaptation, but has since stated that there is no “canon” or “real” Taako. All interpretations of the famous wizard are valid. With his name and in podcast quest to invent the Taco, many fans have seen him as Hispanic, but since Taako has a history of stealing anything he can get his hands on, the cast wanted to avoid stereotyping him as a hispanic thief. 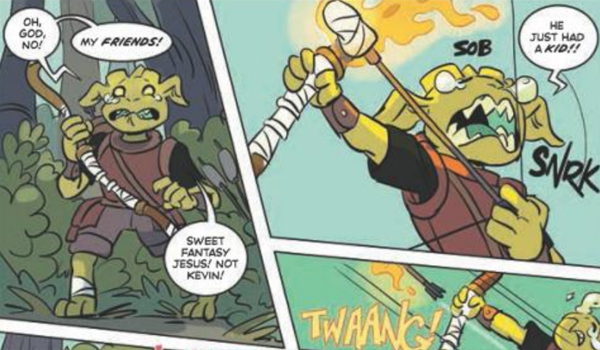 Another issue with his adaptation is that since Here There Be Gerblins was mostly based on the 5e starter pack campaign called Lost Mines of Phandelver, names in the comic had to be changed so there wouldn’t be issues with Wizard of the Coast. Gundren Rockseeker became Bogard Stoneseeker, Phanalin became Haverdale, Klaarg became G’Nash and so on. For fans  of the podcast, this is kind of a bummer. Nothing will compare to hearing Griffin say “Klaarg” for the first time. It’s an unfortunate causality of the adaptation, but since Griffin came up with his own characters and story after this first arc, we probably won’t have to encounter this problem in later issues, other than a few changes in spell names.

I am also wary of the use of Griffin as a commentator. I understand why Clint found it important to include him, but as the series goes on, there will be many serious moments that I’m afraid will be undercut by the inclusion of an omnipresent character that can come in whenever he wants. I’ll be interested to see how they continue to use him in future novels. 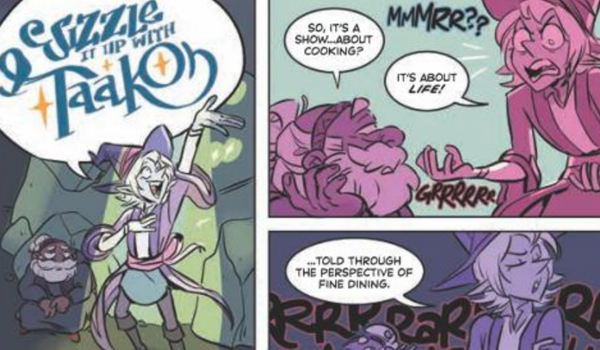 Overall, The Adventure Zone: Here There Be Gerblins, is a mostly faithful adaptation to a much beloved series. It has a lot to offer for both fans and people experiencing The Adventure Zone for the first time. I highly recommend this book for anyone looking for a creative and fun twist on the typical D&D setting and story. I’m greatly anticipating Murder on the Rockport Limited, which comes out July 16th, 2019. As for the name changes, I like to think that this comic is Merle recounting his adventures while getting every name very wrong, as he wants to do.

Are you ready to go on an epic adventure? You can buy The Adventure Zone: Here There Be Gerblins and pre-order The Adventure Zone: Murder on the Rockport Limited now on Macmillan’s website. And their podcast is available anywhere you find podcasts or at Maximum Fun. Sound off in the comments or send us your thoughts on Facebook or Twitter!