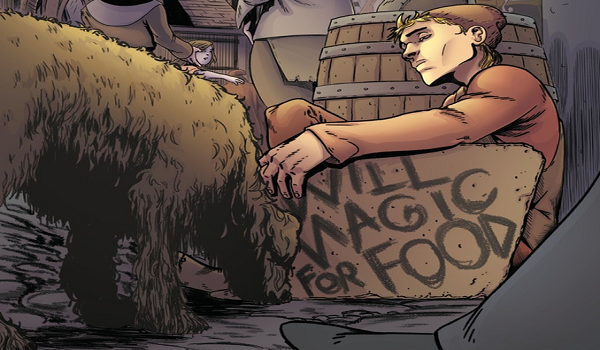 Rovers Happenstance Chapters 1-3 is written and drawn by Mick Beyers. Set in a fantastical, mythical world, the characters of Rovers are just looking to get by with odd jobs as mercenaries. I always enjoy a good fantasy story, so I was excited to dive right in.

Chapter 1, “The Goblins of Grere”, wasted no time in launching into the story. Basically, the mercenaries get involved with a local farmer and his daughter only to discover a big secret and bring down some trouble upon them.  Forced to flee, the daughter of the farmer joins her childhood friend and the three mercenaries to the next town over, where they run into more trouble with slavers (Chapter 2, “Work-a-Day-Magician”). They also deciding where they were going to go and started out on their travels along the Troll Road. On the Troll Road, the young magician clashed with the giantess over duties and then they also run into more problems (Chapter 3, “Troll Road”).

Rovers feels to me like a fantasy novel. I can definitely see that this takes from the classic fantasy quest tropes. It’s really easy to read and enjoyable. The pattern of the first three chapters helped. And something always happened that was important. The journey from one place to another is a tired but true fantasy trope, but the story and the characters make up for it.

The downfall so far with this type of story in a comic medium is that the exposition has to be done mostly through conversation. World-building will get better as the travels continue, but I wish there was an easier way to give information to the readers so that the conversation bubbles don’t get to much.

I really like the characters. Arrice is probably the primary character as the story moved along because of her.  Arrice is a strong-willed goblin girl. She’s capable, and thankfully, not annoying. I can’t tell you how many fantasy books and stories I read where I can stand the female leads for one reason or another. Even better, I can already tell that Arrice will have some amazing character development in later instalments.

Gaberlin is Arrice’s childhood friend and a magician. But he’s not a very good magician and he’s super awkward. He clearly likes Arrice, who does not return the sentiment. He’s kind of a hapless guy. He’s the weak link so far amongst the main characters, but he’ll have character development too.

Bellik is the half-giant woman who is the toughest character so far. She’s very stubborn and she likes to fight.  She does not like anyone who does not try their best and gets irritated easily. She’s very cool, but I want her to be a well-rounded character so I can’t wait to see what’s next for her. Then, there’s Essar, almost the leader of the group and Father Burr, but they’re side characters at best and used as exposition mouth-piece. But I find the focus of the characters to be on everyday average people, er, creatures, and not princes-in-disguise or some prophecy to be quite refreshing.

For someone who is a writer but not an artist, I have great respect for any creator that can both drawn and write a compelling story at the same time. I like the artwork. It reminds me of the art from an old newspaper comic set in a fantasy world. Right now there’s no colour pages as the majority is in black and white. I think that it would be better coloured to bring the setting of the story to life.

A strong start to Rovers Happenstance, the first three chapters introduces the world and the characters, even if it’s clunky sometimes in its delivery. I would prefer it in colour but the black and white style works.  The characters are solid enough and they clearly have room to have some major character development. Overall, I enjoyed reading and hope to see more issues in the future!

Check out more information about Rovers Happenstance on its Kickstarter. Let us know what you think, so sound off in the comments or send us your thoughts on Facebook or Twitter!