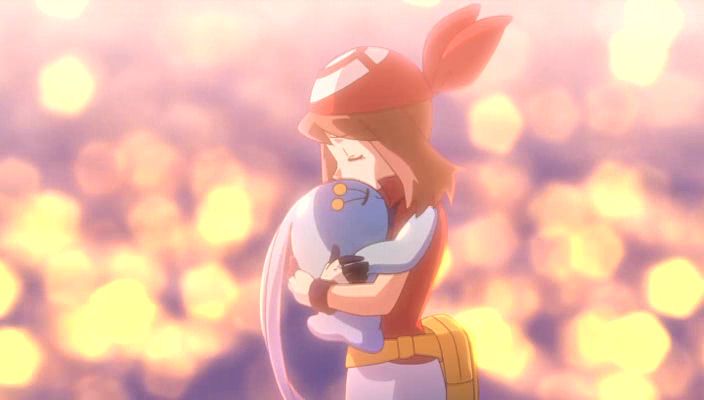 Welcome back to our Pokémon movie marathon, going through all of the anime’s films in preparation for the release of Detective Pikachu. In our second part, we shall be reviewing the movies of the Ruby & Sapphire and Diamond & Pearl eras. Whiilst the “Advanced” generation offered something different with each film, the “Diamond & Pearl” generation was a bit more cookie cutter and repetitive. 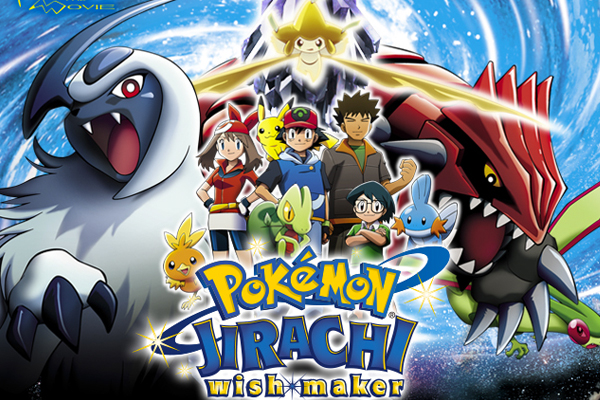 The sixth Pokémon movie is the first set in Hoenn, and the first to feature May and Max. Allegedly the film was meant to celebrate the new millennium, but came out three years too late. Jirachi Wish Maker is a passable film, with not much to talk about. The plot revolves around the wish-granting Jirachi, who only awakens every one-thousand years when a comet passes by Earth. As you might have guessed, Ash and friends are in the vicinity, Jirachi becoming friends with Max. Jirachi fills the role of the cute legendary, but speaks English, and has a little more personality than Mew or Celebi.

The highlight of the film is the antagonist, Butler, an eccentric ringmaster and scientist. He once worked for Team Magma, and hopes to awaken Groudon in order to prove his worth. He is incredibly likeable, and his intentions, when they do blow up in his face, encourage him to make amends. Max and Jirachi’s relationship is bittersweet, and better explored than most prior human-legendary Pokémon bonds in previous films (sans the third and ninth films). 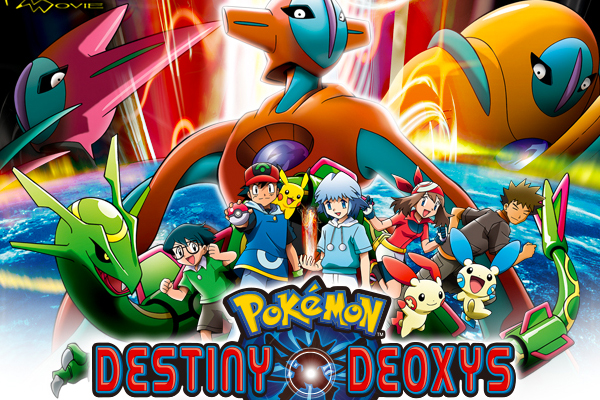 The seventh film is a peculiar one, mixing different ideas that really shouldn’t work together, and yet do. The film has themes of identity, trust, and looking beyond first impressions, but used differently than in Pokémon: The First Movie. While Ash is the hero as always, the main character arc lies with a boy named Tori. In the opening scene of the film, Tori and his parents witness a meteorite crash during an expedition. Tori is nearly trampled to death by rampaging Pokémon, and is left with a severe phobia of them. As such, he is terrified of being even near Pokémon, which is hard when you live a world where they play a role in every function.

Ash and co. arrive in LaRousse City, a technologically advanced city that is made of intelligent Lego bricks. Think if Minecraft or Lego were adapted into actual city planning. Ash meets Tori, and strives to help him over come his fears. That meteorite from before actually contained the alien Deoxys, whose untimely arrival incurs the wrath of the sky dragon Rayquaza. Deoxys is drawn to the city, in search of something, though its ill intentions aren’t as sinister as they appear. The problem is the alien’s quest causes chaos, and it is only worsened when Rayquaza shows up for payback. I feel the film could have done without Rayquaza’s presence, and it is just there to promote the character – an ongoing problem in these movies.

Lucario and the Mystery of Mew 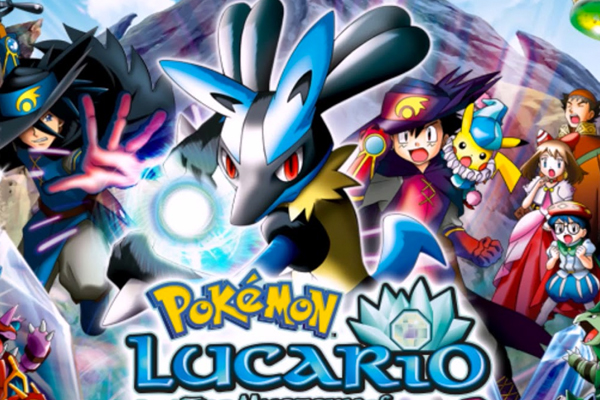 The eighth film has a magnificent premise, feeling like a narrative imagined by Don Bluth or Hayao Miyazaki. Long ago, Lucario and his master, Sir Aaron, attempted to stop a war between two armies as they fight for the Tree of Beginnings. However, Aaron appears to betray Lucario, trapping him within his magic staff. Centuries later, Sir Aaron is celebrated as a hero in Cameran Palace, with Ash’s group attending the festivities. Ash inadvertently releases Lucario from the staff, the jackal bitter towards Sir Aaron for his betrayal. At the same time, the playful Mew unintentionally kidnaps Pikachu and Meowth, taking them to the Tree of Beginnings. Ash and co. decide to go to the tree to find Pikachu, guided by Lucario, and accompanied by the Lara Croft-esque adventurer Kidd Summers.

During this journey, Lucario retreads his life with Aaron, trying to understand his reasons for his treachery. Lucario is voiced by Sean Schemmel (i.e. Goku of Dragon Ball), possessing abandonment issues, and clashes with Ash as a result. Mew is tons of fun and has a lot more personality than it did in the first movie. Regirock, Regice, and Registeel show up to act as bosses, but are just there in the same capacity as Rayquaza was in Destiny Deoxys. The Tree of Beginnings is certainly a weird setting, built like a giant biological system, with killer giant red blood cells that eat anyone threatening the tree.

Lucario and the Mystery of Mew marked the final movie dubbed by 4Kids Entertainment. The anime and all subsequent films were dubbed by The Pokémon Company, replacing the beloved voice cast with a new one, save a couple of actors. Old wounds still have yet to heal for some fans, though I’ve personally grown to like the new cast. And this was probably the best film for the original cast to end on.

Pokémon Ranger and the Temple of the Sea 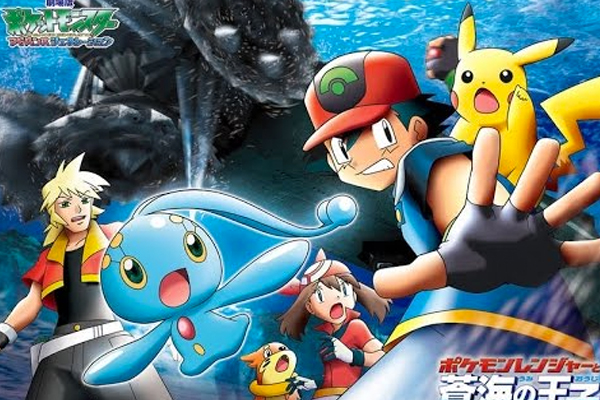 The ninth Pokémon film was the last of the Ruby and Sapphire era, and a good one to end on. There’s a lot going on, but is a real charmer. Jack Walker, a Pokémon Ranger, acquires the egg of Manaphy. Manaphy is the guardian of Samiya, an underwater temple built by the People of the Water. This has a similar premise to Laputa: Castle in the Sky, with a long lost fortress, evil pirates, and a MacGuffin carried by one of the main characters. Though in this case, said MacGuffin is an adorable Pokémon that forms a mother-child bond with May. Ash and co. join forces with Jack and Samiya’s descendants to find aforementioned temple, and protect it from the delightfully hammy Phantom.

The relationship between May and Manaphy marks one of the best relationships in these films. Manaphy stands out from the likes of Mew and Celebi, by having an actual character arc. Both May and Manaphy must choose between staying together, or tearfully parting ways so Manaphy can fulfil his destiny. Jack is particularly pushy about breaking them up, but realises May must make the choice herself. Still, the film is very heartwarming, telling a decent story. This was also the first film for the then-new voice cast, and they do a fine, if, wobbly job.

The Rise of Darkrai 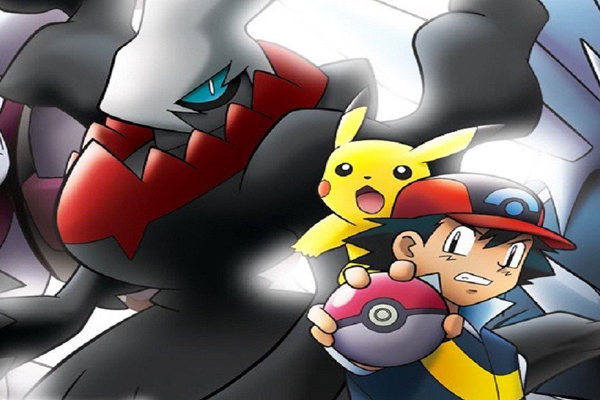 Things started to become a bit repetitive in the Pokémon films, each with a standard plot involving a legendary Pokémon and a cataclysm that must be overcome. But, occasionally, they tackled different genres. In the case of the Diamond & Pearl era’s first film, it is a Kaiju movie. Dialga and Palkia, the gods of time and space, get into a cosmic clash, dragging a city into their interdimensional conflict. At the heart of the battle is Darkrai, a nightmare-inducing Pokémon, considered a menace in town, but just wants friends. Or something like that. Darkrai doesn’t really do much in the film, and has little impact on the overall plot. He’s just there because he needed to be promoted, as it goes with these movies. The clash of the titans is fantastic, and I do admire the creative way that our heroes quell the mayhem.

Giratina and the Sky Warrior 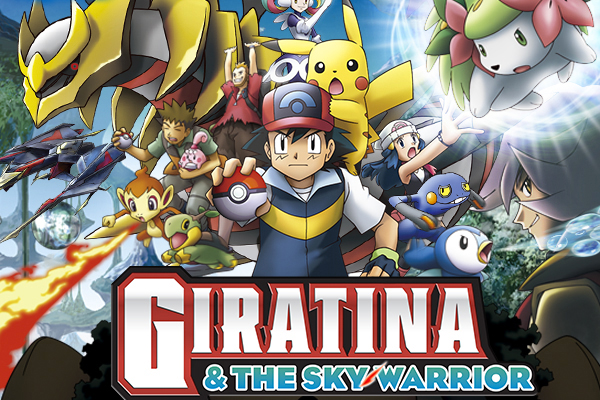 This movie is actually a semi-sequel to The Rise of Darkrai, beginning with Dialga picking a fight with his brother Giratina, who dwells in another dimension, the Reverse World. An evil generic villain wants to use Giratina’s power to flip reality, trapping mankind, whilst he can live alone in the Reverse World. Not that this really matters, since the main story involves Ash and co. escorting a bossy hedgehog, Shaymin, to a special field where his magic flowers can bloom. Shaymin’s constant snark is hilarious, and he transforms into a cool-looking “Sky Forme”. He certainly stands out from the other cutesy mythical Pokémon. The clash of plots makes the movie a little shaky, but it is still an enjoyable watch.

Arceus and the Jewel of Life 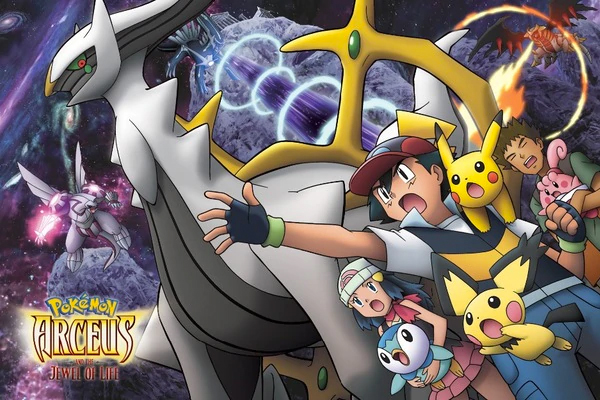 Attempts at doing film trilogies means some effort should be made to make the next installment better than the last. This pseudo-trilogy comes to an end with a clunky and poorly written movie. Arceus, the god of the Pokémon universe, awakens from hibernation to declare judgement on humanity for past betrayals. As you might expect, Ash, Dawn, and Brock get caught in his path of righteousness, and are sent back in time by Dialga to change past events that led to Arceus being so mad. We learn the leader of a human tribe borrowed powers from Arceus to create paradise on Earth, only to allegedly betray him. This turns out to be a lie, as an evil generic vizier is responsible. Ash’s group are accompanied by an empath, but she apparently can’t read human emotions, since she thinks the vizier is a nice guy. A wasted movie that is full of cliché tropes and Arceus is completely underwhelming. 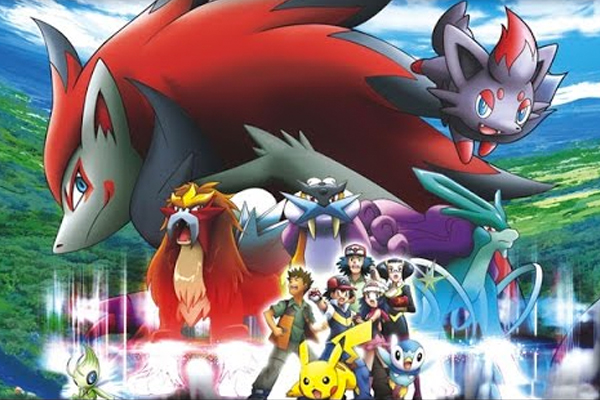 The final Diamond & Pearl movie is a standalone film, heralding the fifth generation of Pokémon, but pays tribute to Pokémon Gold & Silver too. An evil media mogul received powers of foresight from Celebi, but when they start to expire, he wants to draw out Celebi again to get a recharge. To do this, he uses the shapeshifting Zoroark to pose as Suicune, Raikou, and Entei and cause havoc in Celebi’s home. But, the actual Legendary Beasts show up afterward to stop the imposter. Meanwhile, Ash’s group come to care for Zorua, Zoroark’s mischievous baby, who is being hunted by the bad guy’s minions. It’s a very ring around story, with one too many subplots, but the evil businessman archetype is played out in a unique way. The homages to Pokémon 4Ever are a sweet touch.

Which of these Pokémon films are amongst your favourites? Are you looking forward to Detective Pikachu? Leave a comment below or on our Twitter and Facebook feeds.