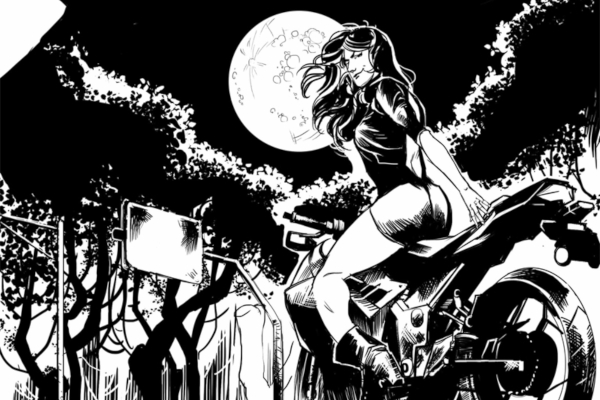 A government body weaponizing super-powered humans is a well-tested formula, but Spanish-born, Scotland-based author Cristina Roswell is keen to give her fresh perspective on the formula with her urban fantasy Woodland Creatures. Originally born as a novel, Roswell has turned to Kickstarter to raise funds for a three-part comic book adaptation of her book.

Woodland Creatures: Wild Souls depicts the blood-thirsty adventures of assassin Callie, who’s mind is linked to a wold, and former US army solider Chris, who’s living with PTSD. The duo find themselves flung into a live-or-die scenario where by the army is keen to exploit their kind and weaponize them for destructive means.

Roswell herself is armed with other Spanish talent in transforming Woodland Creatures from prose to sequential form. We caught up with her to discover more about her comic.

AP2HYC: Woodland Creatures began life as a novel. Why did you want to reinvent it as a comic book?

Cristina Roswell: The reason was mainly to have the story available to a wider audience: the English speaking one and those readers who hadn’t heard about it yet in Spanish (as well as those who had read it and enjoyed the paperback version, of course).

Even though I’m living in Scotland at the moment, I was born in Spain and Spanish is my mother tongue, so the novel that this comic is based on was initially written and published in Spanish. When I met my current partner (native English speaker) I decided to translate it all into English myself, just so that he could actually read at least one of my published works (I have published four novels so far, all of them in Spanish).

My homemade translation worked for him, but it obviously wasn’t professional enough to get it to the public. Then I remembered how a lot of the Woodland Creatures paperback readers had shared their love for how visual my novel was, even talking about how it would make a brilliant movie.

So I thought: what about a comic? Kind of halfway in between a book and a movie, visuals plus text, but only enough text to accompany the art, hence easier to make an accurate translation of.

And so Woodland Creatures, the graphic novel, began taking shape.

AP2HYC: Woodland Creatures fuses together many disparate genres and themes – fantasy, military thriller, and the survival of nature. What inspired you to create a story that brought these elements together?

Roswell: When I start writing, I usually don’t have an idea of all the genres I want to bring in. I have a general idea, but it can change as the writing goes on.

With Woodland Creatures I knew it was going to be Urban Fantasy mainly; I knew I wanted some fantasy in, but I also wanted to keep it as realistic as possible. That’s why even though there are werewolves in it, they aren’t humans that turn into wolves, but humans that can mentally control their amaroqs (wolves) that they are soul-linked to (they are a bit like familiars, but can feel the stronger feelings that their human counterparts feel, and vice versa).

My main focus in my story was to show the link between humans and nature, and the fact that humans can be worse than animals (as in more dangerous) hence the quote that the comic starts with “Man is no man, but a wolf, to those that he does not know”. The quote is obviously linked to the werewolf theme, but goes beyond it to link it to the characters in the book, both werewolf and humans alike, who, given the circumstances, can be as ruthless as the other.

The military thriller part comes just with some of the characters; I don’t want to call them “the bad guys” cause there’s really no completely “bad” or “good” characters (or well, maybe with the exception of one certain psychopath) but just those who think the end justifies the means.

Going back to your original question, there’s really nothing concrete that inspires me to merge different genres, I just let them mix in as the plots needs them. It might not be the most “academic” way, but it works for me and my readers seem to have enjoyed it so far.

AP2HYC: That survivalist idea, of nature and fantasy forced against more artificial, destructive, man-made forces, feels like the driving theme behind Woodland Creatures. Would you agree?

Roswell: Yeah, it is definitely a big part of the story. There’s actually a tale that the main character learns from her father which explains the “creation” of the special wolves that the protagonists are linked to. It tells how when Mankind decided to move away from nature and into the cities, all animals but one species turned their backs on them. That one species was wolves, who decided that they would stand by humans no matter what, and so they moved to live with us.

Society is moving away from nature and, IMO, that can only end in bad news. As we turn our back at nature we forget that we are all linked and that only one of the two can survive without the other… and that one is definitely not us.

Callie, the female protagonist, has gone a bit further and she thinks that humans are a step below in the evolution (and food) chain and hence don’t deserve any respect (so she won’t blink if she has to do some killing). Chris, the male protagonist, is more mature and has had more interactions with people because of his work for the US Army, so he is more open to dialogue and to finding a middle ground… as long as certain lines aren’t crossed.

Meanwhile, on the “human” side, we have colonel Harris, who is of the opinion that nature, animals and, as such, lycanthropes and the wolves they are linked to, are there to serve Mankind.

So yeah, you definitely find that “society vs nature” theme in Woodland Creatures. Can they go together or does the survival of one depend on the destruction of the other?

And then there’s the other major theme linked to the above, and that is the fact that humans are predatory and that there’s nothing some people wouldn’t do to achieve their goals or to survive.

AP2HYC: You’ve teamed up with script-writer Rafael Ruiz-Dávila, artist Tomás Aira and letterer Gonzalo Duarte to turn your novel into a comic. How did the pair join the project, and what’s it been like working with them?

As for working with them, it’s been amazing and very interesting so far. As an author, it’s incredible to actually “see” in images what so far you had only “seen” in your mind. It’s such a fulfilling experience! And Tomás is doing an impressive job so far. He will get the script and just with that and a few directions from me, he’ll totally nail each scene. There are of course cases when he will get something slightly “wrong”, but then make it perfect after one single suggestion. Similarly, there are also those times where he will go beyond what I initially imagined and improve the scene by adding his own input. I feel extremely lucky to have found an artist that I can connect so well with.

As for Rafael, his work is no easier, since he has to grab several pages of full text and transform them into one in which there are only a few words of narration and/or dialogue. He also has to translate my text into a visual scene that later will be designed by Tomás. And at the same time, he also has to put up with the pain in the ass perfectionist of an author that I can be. He’d have to change things to match my vision or convince me to accept his changes (it’s all about learning to choose your battles really, and accepting that sometimes you have to give in for the good of the project). I don’t think I would ever be able to be the scriptwriter of my own works, as I wouldn’t know where to draw the line. Since he is not attached to the story, he has that distance that allows him to do the job better. 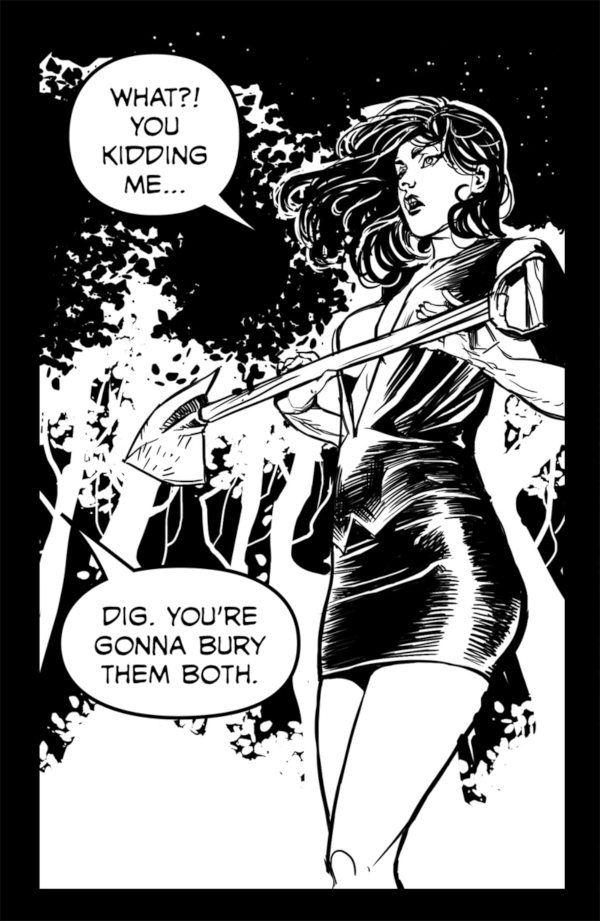 AP2HYC: Looking at the preview pages included in the Kickstarter campaign, Aira brings a taught, menacing flavour to the monochrome art. What was the process like in mapping out a visual style for Woodland Creatures?

For Woodland Creatures I wanted something kind of dark and realistic. I didn’t care for colours as I thought it might make the story look too “cartoony” and I was looking for something more striking. I was initially interested in something similar to the artwork in BOAT, by David Lumsden, a graphic novel that I discovered a couple years ago and whose style I fell in love with. It’s all in greys, blacks and whites and I thought that would work perfectly for my story.

I showed that to Tomás and he decided to go a step beyond and get rid of any greys to have it all in just plain black and white. At first I was unsure, but when he showed me the first scene, all doubts disappeared. I never thought there could be so much done with just black and white, but somehow Tomás turns those two into a whole new experience that makes you actually forget about any other shades or even colours in general.

And you might wonder if maybe he can’t do colouring, but then you see the beautiful covers and the other prints that he has brought to life with colour, and you realise how incredibly versatile an artist he is.

I think the black and white works with the visceral, brutal characters of Woodland Creatures, the action and, in an ironic kind of way, with the fact that there are no “black and whites” really in said characters, but a whole range of greys.

AP2HYC: By comparison, how easy/difficult was it in transferring the story from novel to comic form?

Roswell: I think probably the most difficult part relies on Rafael as he extracts the main bits from the novel, condenses it into shorter parts and explains to Tomás how he sees the scene artistically. For me the main work was to create the original paperback novel, to actually write down the story as I imagined it in my mind, and now, to supervise Rafael and Tomás to make sure that it all stays as close as possible to the original story but without compromising the comic.

For me it’s been a learning process as I didn’t know a lot about comics before I started this. Some people might think it’s easier to “draw a comic” than to write a novel, but it actually isn’t, there is a lot of work going on in both.

AP2HYC: At the time of this interview being published, the campaign is over 60% funded. What’s been the most rewarding thing for you in reinventing Woodland Creatures this way?

Roswell: Two main things stand out over the rest: one would be to finally see my characters take shape, to go from just an image in my head to an actual image on paper.

The other thing would be to be able to reach to a wider audience, the English speaking one, as I couldn’t share my work with them when it was just a paperback novel in Spanish. Getting such good feedback from those that have had a chance to check the preview samples and hear about the plot in person or online, knowing that they enjoy it, that’s always the most rewarding thing about launching a new project.

You can discover more about Woodland Creatures via its Kickstarter campaign. Will you be backing the comic? Let us know in the comments section below or send us a Tweet!