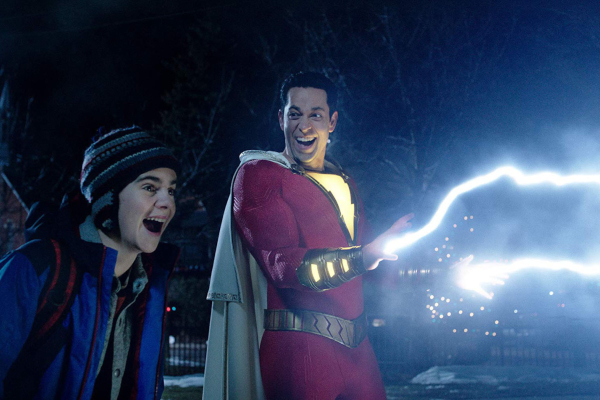 The DCEU had a rocky start to their cinematic universe based on the comics of DC. Man of Steel, Batman v Superman: Dawn of Justice, and Suicide Squad made a ton of money but was received poorly by fans and critics alike for a variety of reasons. And Justice League was just a terrible mess. To be fair, I gave up on the DCEU when news broke that they switched from Zack Sydner to Joss Whedon and began reshoots months before release. I didn’t even see it in theaters. And while Wonder Woman was an all-around success, the DCEU was floundering, until Aquaman and now that Shazam! is out in theaters, DCEU finally has two good movies in a row!

Aquaman was the game-changer. There’s only so many terrible choices before someone started to listen. Directed by James Wan, who would have thought Aquaman would make a billion dollars?  As we all know, Aquaman, considered a joke, stacked against the likes of Superman, Wonder Woman, Batman, Flash, and Green Lantern normally wouldn’t work.  But Jason Momoa‘s portrayal and Wan’s directing helped make Aquaman a major league hero.

Shazam! was another success. The trailers leading up to the movie’s release gave the impression that it would be a dude-bro stupid humour thing. But I bit the bullet and saw it. It truly was unique with a child-like humour and a strong message of family.  There were likeable characters and the show stealer was Freddy. There was a good balance of the darker themes with silly humour that was not out-of-place in a movie where a 14-year-old received god-like superpowers.

Why are these kind of cult heroes gaining praise? I think there’s a few major factors contributing to the success. One, Zack Sydner is not in charge. If you noticed what movies that he had a hand in compared to him no being involved at all, it’s partly due to the directors chosen for the job actually caring about the core of the characters.  Wonder Woman, Shazam! and Aquaman were hits since they were not butchered in post-production with major edits or reshoots either (like Suicide Squad and Justice League).

But the major reason is that DC stopped trying to emulate Marvel. They are seeing the worth of the characters and making the movies with a good balance of light-hearted moments and the darker ones. DC has a treasure trove of characters who are not Batman or Superman. Let the Dark Knight and the Man of Steel take a backseat to everyone else. We have seen those stories over and over.

The remaining question is if DC can keep the winning streak going with the next few movies?  Joker is not a DCEU movie, just a normal DC movie, but it’s out in time for Halloween. Birds of Prey and Wonder Woman 1984 will be out in 2020. From the next three DC-related movies, I think might just keep the trend going.

So what did you think of Aquaman?  Did you like Shazam?  Is DC going to stay out of the rut making terribly boring or bad movies?  Who knows?  Let us know what you think so sound off in the comments or send us your thoughts on Facebook or Twitter!