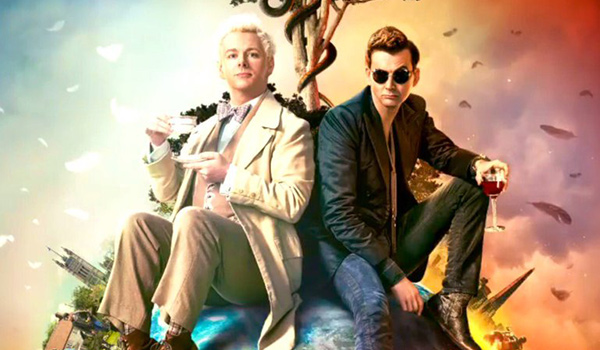 Before we go any further with this review, you should know that Good Omens is one of my all time favourite books. I first read it sometime in my early teens and there was a time when I was always in the middle of it, starting over every time I finished it.

You should also know that I take adaptations of works close to my heart very seriously. For instance, while both Preacher and Lucifer are in my top 3 all-time favourite comic series, I barely made it through a couple episodes of their respective TV adaptations because they strayed too far from the source. Of course, Sandman rounds off my top 3 comics in a Vertigo trifecta and was my gateway drug to Neil Gaiman and subsequently Good Omens .

So when I first heard that Good Omens was being adapted into a TV show, I was wary. Like co-authors Neil Gaiman and Terry Pratchett, I too always believed Good Omens would be great on screen. But I’d been hurt too many times before.

Then came the news that Gaiman would be the show runner, and I began to have hope again.

So when I finally sat down to watch the first episode, my expectations – and the stakes – were high.

And thank heavens the show delivered with flying colours!

Tennant appeared to be channelling his inner Bill Nighy in his performance as Crowley, an interesting but incredibly successful decision. Michael Sheen is equally delightful as Aziraphale, and I could easily have watched them as a supernatural odd couple miracling their way through history for a whole series. Which is to say, the first half of episode 3 was easily one of my favourite parts.

The rest of the casting was equally well-done. In addition to a who’s-who of British character actors, Tennant and Sheen are joined by Jon Hamm, Jack Whitehall, Michael McKean, and Miranda Richardson. Hamm in particular got to flex his comedy skills, while McKean’s Scottish witchhunter Sergeant Shadwell very nearly stole the show.

Aside from the brilliant cast, there’s the music. Crowley is a big Queen fan (another of my favourites) and their songs were used to excellent effect throughout the series. If memory serves, some of the songs were included in the original novel, and it was great fun hearing them at just the right moments in the show.

Indeed, the tone of the whole show was right on the money. Gaiman and Pratchett brought a great deal of humour to the apocalypse in the novel, and all of it is still present in the series. Most likely, this is Gaiman’s own influence. It’s a reminiscent of the recent Dirk Gently BBC series (the one with Stephen Mangan, not the one with Elijah Wood) and indeed the whole series has a bit of that Douglas Adams feel. Perhaps because of the Terry Gilliam-style opening credits, the series’ recipe for success also seemed to include a healthy helping of Monty Python-esque absurdity.

Of course, no series is truly perfect and I did have a few nitpicks with this one. While I agreed with most of the ways the series diverted from the book (much of the stuff with Hamm’s Gabriel and the angels wasn’t in the novel, among other things), I was disappointed that we didn’t get to see the Other Four Horsemen of the Apocalypse, which were always one of my favourite (there’s that word again) bits of the novel. They were sadly also missing from the BBC radio show that came out a few years ago, so it wasn’t surprising, but still sad. I also had some issues with the pacing, but I can’t say for sure whether some of those are replicated from the book.

Overall, this fan was very, very pleased with this adaptation of one of his favourite (there’s that word again!) novels and subsequently this will no doubt be one of my favourite (last time I swear) TV series until the end-times really do begin.

Was Good Omens a heavenly affair for you too? Let us know in the comments section below or send us a Tweet!