Home » Godzilla: King of the Monsters is an Almighty Spectacle 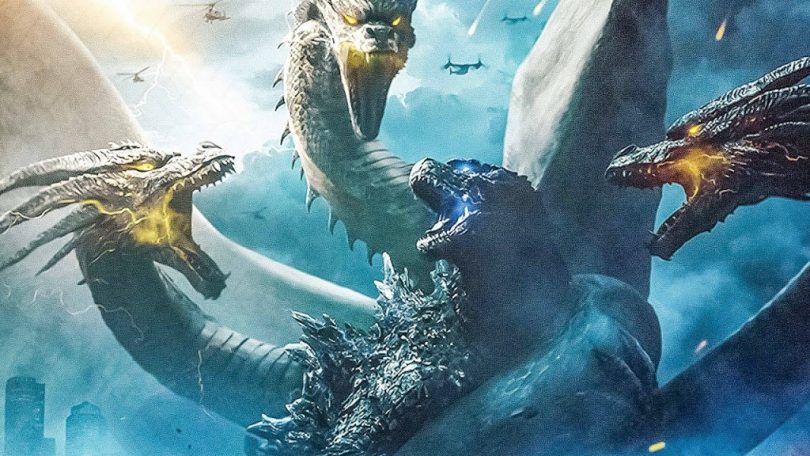 Godzilla: King of the Monsters is the third installment of the slow-burning MonsterVerse, being a sequel to the 2014 film Godzilla, and a semi-sequel to Kong: Skull Island. Like every other non-MCU franchise, the MonsterVerse has struggled a bit in its direction and tone. Not to mention it takes obvious inspiration from the MCU, with the monster-researching organization Monarch serving as the S.H.I.E.L.D. to Godzilla. Monarch played a rather dismissive role in the 2014 film. In Kong: Skull Island, Monarch took a leap in notoriety as their small, government-embarrassment-of-an-office uncovers that their crackpot theories of giant monsters were real. Now, Monarch, and Godzilla, take literal centre stage in a changing world, in a rather spectacular movie.

The following review contains spoilers for Godzilla: King of the Monsters!

The world’s most famous giant, atomic dinosaur debuted in his titular 1954 movie, produced by Toho, serving as metaphor for the horrors of nuclear devastation. Overtime, Godzilla evolved from a menace, to neutral brawler, to child friendly hero, and back again, starring in over thirty goofy movies fighting other rubber suit monsters. After the disastrous 1998 Roland Emmerich film years earlier, Warner Bros. and Legendary Pictures teamed up with Toho to produce a new, better, ongoing American film franchise. One that would respect the past and establish Godzilla’s god-like might in the world.

Gareth Edwards’ movie failed to deliver the staple monster fights, had boring characters, and wasted Bryan Cranston, but did manage to serve as an atmospheric disaster movie, as well as create an awe-inspiring version of Godzilla, who this time personified natural disasters, and possibly global warming too. Kong: Skull Island took a more B-movie approach, going for fun and frolics, though the adolescent Kong could be a metaphor for the futility of an unwinnable war, considering the movie was set at the tail end of the Vietnam War. In King of the Monsters, Godzilla and his fellow Kaiju (or Titans) serve as destructive, unstoppable forces of nature. Their religious, philosophical, and natural roles in the ecosystem are discussed extensively throughout the film.

In the director’s chair is Michael Dougherty, best known as co-screenwriter of X2, and then director of cult horror films Trick ‘r Treat and Krampus. Elevated into the role of director, and being a huge Godzilla fan, Dougherty was perhaps the best choice for this extravaganza of a movie. Though a huge monster mash that will thrill any Godzilla fan, Dougherty treated and filmed the movie with the magnificent breadth of an epic. The Kaiju are viewed in godly awe and terror, their presence and impact on civilization comes with literal thunderous devastation and wonder. Never before have two dinosaurs, a giant butterfly, and a three-headed space dragon looked so beautiful.

Euphoric foaming at the mouth aside, what’s the story? Five years after the battle of San Francisco, Monarch have gone public with their knowledge of the monsters, now colloquially known as the Titans, rather than the silly-sounding M.U.T.O. Most lie dormant underground, and are monitored/contained by Monarch agents, led by Dr. Serizawa (Ken Watanbe) and Dr. Graham (Sally Hawkins). International governments want to naturally kill the monsters to save innocent lives, but Monarch is adamant that some Titans, including Godzilla, are potentially benevolent. It is suggested that that Titans were once considered actual prehistoric gods, and the rightful rulers of the planet.

Monarch paleobiologist Dr. Emma Russell (Vera Farmiga) designs the “Orca” system, which can use bioacoustics and frequencies to communicate and even control the Titans. She and her daughter Madison (Millie Bobby Brown) are kidnapped by an unnamed militant ecoterrorist unit led by Jonah Alan (Charles Dance). Disillusioned with humanity, Jonah wishes to weaponise the Orca, and systematically awaken the Titans to reset the balance of nature at the cost of civilization. They kick off this campaign by freeing the frozen King Ghidorah (or Monster Zero), a powerful, three-headed, lightning-spitting golden dragon with extraterrestrial origins. Emma’s estranged husband Mark (Kyle Chandler), Monarch scientists, and a military unit called G-Force travel the world to stop the growing threat in their huge Helicarrier-esque airship – also a nod to the Super-X from the Toho films.

The unnatural and decimating presence of Ghidorah attracts the many other Titans, including Godzilla, but also the volcanic-based pterosaur Rodan, and the graceful, majestic goddess Mothra. As you might expect, these giants all clash with each other, cities get squished into oblivion, whilst scientists and soldiers stand around talking about how to counter. Mark has a personal hatred for Godzilla and the Titans, believing they should be destroyed, having lost a son during the events of the 2014 film. It comes down to putting trust in the gigantic beasts that could both threaten and save the world. 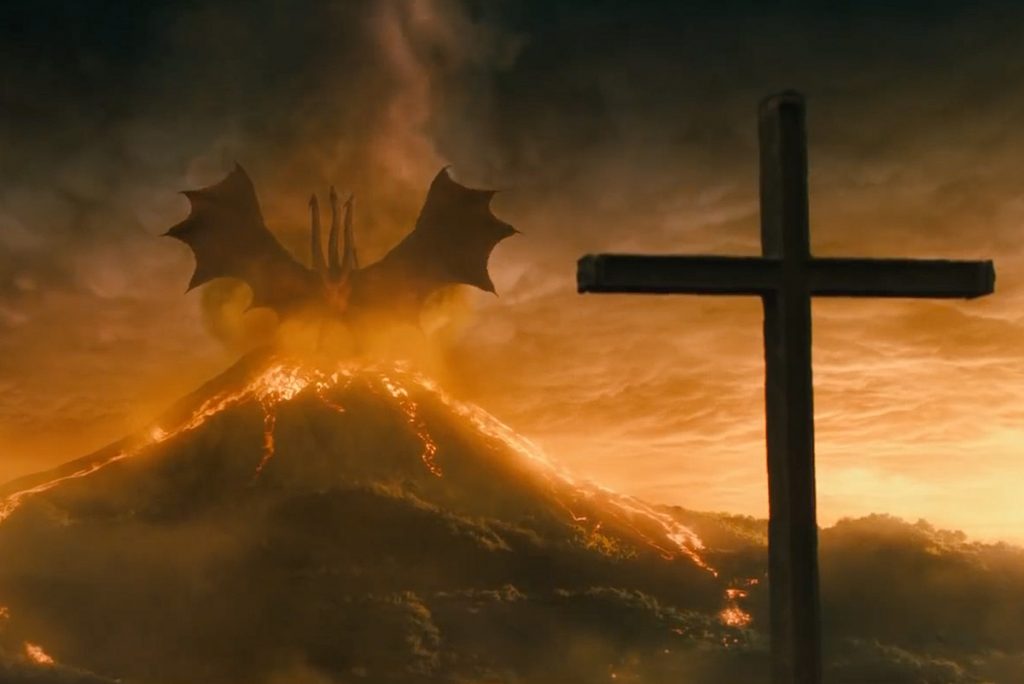 This is essentially a traditional Godzilla movie transplanted to the west with a bigger budget, and it just cooks. It is a fantastic spectacle that every Godzilla fan has longed to see, considering how rare the Japanese films were to buy in American until a few years ago. The movie is similar to Independence Day and Pacific Rim, being a big, bombastic film that offers a good time, but has an underlying tone of morality to it. Whilst in the aforementioned movies, the threats are evil generic aliens, the monsters here are mostly in the grey area. Godzilla and Mothra appear good-natured, but can be aggressive towards human if provoked. Rodan follows whoever has the biggest might, and Ghidorah is purely in it to cause chaos and destruction.

Reliance of eye-melting monster fighting carries much of the movie, and there are endless shots that could easily become a thousand posters and Facebook banners. Each entrance by the big four Titans are mesmerising, bold, and dramatic. King Ghidorah standing atop an erupting, stormy volcano like the Devil, with the Cross in the foreground; Mothra spreading her wings beneath a waterfall; Rodan barrel-rolling through the air to take out fighter jets; Godzilla approaching Monarch’s underwater base, disappearing and reappearing through his glowing fins like some sort of Lovecraftian entity. There isn’t a single moment where the monsters bring about boredom. Around seventeen or so Titans are mentioned as existing, though we only see a handful in minor roles, with plenty of mentions of Kong.

The film succeeds in being a monster movie, a disaster, and a sci-fi fuelled clash of the titans. And yet, it isn’t without its problems, and most of that lies on the human side of the story. The movie has a large cast of stellar actors, most being members of Monarch or G-Force: Ziyi Zhang, Bradley Whitford, Thomas Middleditch, Aisha Hinds, O’Shea Jackson Jr., and a returning David Strathairn. The acting is across the board good, but this large cast of characters have very little to do, since most spend their time in one room talking exposition. Watanbe probably gives the most memorable role, mostly based on his character’s genuine faith in Godzilla. Sally Hawkins is barely in the movie before getting stepped on by Ghidorah, and you wouldn’t even notice she was gone. Ziyi Zhang’s character serves as a favourable wink to Mothra’s mythology, and I would’ve liked more expansion on this role. Bradley Whitford is on hand as a Rick Sanchez expy, spouting out witty one-liners whenever needed.

Charles Dance’s antagonist doesn’t really get fleshed out much beyond the vague hint he saw the worst of humanity during war, and will do anything to save the planet as he sees it. Kyle Chandler is good in his role, having appeared in Peter Jackson’s King Kong film, though in a very contrasting role. Millie Bobby Brown is charming as always, but her role is a bit underplayed.

Verna Farmiga’s Emma Russell is perhaps the biggest conundrum in the film. At first, she appears to be an unwilling conspirator in Charles Dance’s plans to protect Madison. But then, after freeing Ghidorah, she addresses her Monarch colleagues and the audience, explaining she is in deliberate cahoots with the ecoterrorists. Though likely driven by unstable grief for her dead son, Emma blames humans rather than the Titans for the worldwide devastation, and fully supports their rampage to crush mankind if it means saving the world. There’s some rather heavy-handed environmental messages going on, that don’t quite work when used to smother an audience. The cataclysmic presence of the Titans demonstrate it without needing to spoon feed people.

Godzilla’s past movies have dealt with similar topics, beyond the dangers of atomic bombs. Biollante, a large plant/reptilian hybrid, symbolised genetic testing. Ghidorah was rumoured to personify the threat of China. G.M.K: Giant Monsters All-Out Attack featured a zombified Godzilla, who was haunted by the souls killed in World War II, whilst taking a critical examination of Japanese society. The wonky Godzilla vs. King Ghidorah involved American, Russian, and Chinese time travellers altering Godzilla’s timeline to somehow prevent Japan rising up to become a global superpower in the 23rd century. When Godzilla is mutated in the present, he attacks specific companies ran by those he saved in WWII, as implied punishment for the men investing in industrial profit rather than do some good in the world. The most recent Godzilla Resurgence (or Shin Godzilla) took shots at incompetent Japanese bureaucracy who were too proud and stunted to let international allies intervene in stopping the movie’s freaky ass version of Godzilla. You get the picture.

Another divine part of the movie, aside from Mothra, is the fantastic score by Bear McCreary, who uses familiar themes composed by Akira Ifukube, who spent forty years writing music for Godzilla’s filmography. From the iconic theme song, to Mothra’s beautiful song, plus dramatic new themes for Rodan and King Ghidorah.

The movie is dedicated to two great alumni of Godzilla’s legacy – Yoshimitsu Banno, director of Godzilla vs. Hedorah, and Haruo Nakajima, who played Godzilla in twelve films.

All in all, Godzilla: King of the Monsters is an absolute blast, a real showstopper to define that the giant monster genre has a place in history. Though the plot flip flops a lot, and the characters aren’t all that interesting, these are somewhat expected of Godzilla movies if you’ve seen a few. Next year, Godzilla vs. Kong comes out, pitting the two greatest monsters against each other once again. For now, this film is a monstrously good time, and proves that Godzilla is now and forever the King of the Monsters.

What were your thoughts on Godzilla: King of the Monsters? Where do you want the MonsterVerse to go next? Leave a comment below, or on either our Twitter or Facebook feeds.