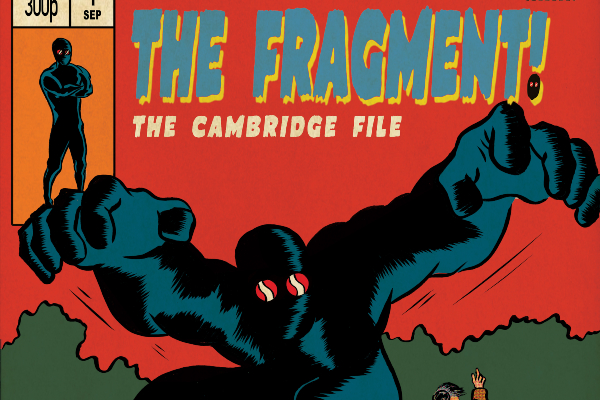 Adam Falp pulls at all manners of 1960’s spy-fi traits with his indie comic The Fragment!, a homage to that era of cult entertainment. Born as a one-shot title last October, the comic follows the adventures of British Secret Intelligence Service agent Thomas Locke as he battles against all manners of nefarious evil-doers.

Falp has now turned to Kickstarter to raise funds for the follow-up to last year’s debut issue, entitled The Fragment! The Cambridge File. We caught up with Falp to discover more about this curious, quirky-sounding comic book.

A Place To Hang Your Cape: Why did you want to bring this project to life?

Adam Falp: The Fragment! is a book that has grown with me as I’ve been on my comic-making journey. I’ve always had a plan in my head of what books I wanted to make and when and 2 issues of The Fragment! has been a big part of that plan.

I’ve been selling comics at shows for just under a year now but one thing that bothered me quite early is how little reach you seem to have when your independently making comics. So I began thinking ways you could get books into the hands of a wider audience. This book was never supposed to come to Kickstarter – I didn’t think I was ready at all, but one thing I have learned about myself is that when I get an idea, these ‘plans’ change on a sixpence. I wanted to reach a wider audience, spoke to a few mates who have used Kickstarter and overnight I decided I was putting the campaign together.

AP2HYC: Where did the inspiration for The Fragment! come from?

Falp: It was really a big cocktail of different things. I sat down a couple of years ago now to brainstorm ideas of what I wanted my first book to be about. I had a few ideas jotted down but one was to do a comic book sequel to a 1950’s novel called Black Wing by George E. Rochester. It’s about a young man sent out on secret missions in a flying suit.

I was also watching The Prisoner, if anyone’s not familiar, that’s about a 60’s show about a British agent who is held captive on an unknown island. There were also a bunch of films – a couple of bad James Bond knock-offs that I found charming and a film by Mario Bava called Danger: Diabolik that explores what would happen if a James Bond style character was a criminal. Aesthetically its amazing too. All these things mixed together to create the foundations of The Fragment! and more importantly its main character Thomas Locke.

AP2HYC: This is the second issue of The Fragment!. What makes this issue different from the first one?

Falp: Although it’s a second story both of the books have been designed to be read as single issues, with the idea of reading both together giving a richer reading experience. This book picks up 5 years after the first one and Locke has spent that time in a psychiatric hospital. I think the first Fragment! story had a very straight forward narrative that was told as if the reader was watching the events. The new issue begins in the same vain but gets very strange, similar to Locke himself.

In terms of the book itself, I’ve come a long way since that first issue and I like to think this one is on a different level. It’s my best work, especially as an artist and I’m very proud of it. 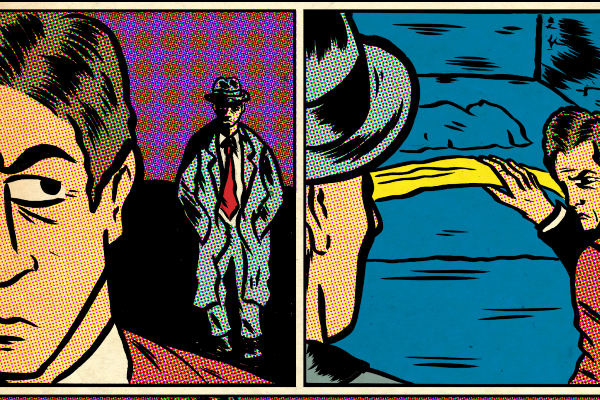 AP2HYC: You mention how The Fragment! takes a lot of inspiration from spy-fi media of the 1960’s. What would you say The Fragment! pulls from that era specifically to define its own retro aesthetics and vibes?

Falp: I think, on the face of it, It pulls a lot from those early James Bond movies, although I haven’t actually seen too many of those. What I have seen are quite a few movies that wanted to jump on that early Bond success and in turn, use a lot of the tropes you associate with them. That’s more what The Fragment! pulls from, in a sort of ironic way. Not so much with this one, but that first book has a lot of on the nose espionage cliches. That’s how I’ve tried to paint the picture, that it’s just another one of those until you get to the end and realise there’s actually something quite different going on.

There’s something about media of that time that I just find so appealing. I love those movie posters, I love the colour schemes. It’s something you can’t get anymore.

AP2HYC: The Fragment! Has an added edge via its hero living with dissociative identity disorder. Why did you want to inject the character with that defect?

Falp: I’m actually pretty fascinated by things like dissociative identity disorder. How that mind can just change like that is very interesting to me. I’ve watched a lot of documentaries about that and other similar mental illness’. The appealing part to me, about creating a character suffering from something like this, is that there are no limitations. I’ll never have to have to concern myself with making sure their behaviour is in keeping with their usual characteristics. It may seem like I’ve created one person, when in fact, I’ve created several.

AP2HYC: You’ve written and drawn the comic itself. What’s that like to handle both of the biggest factors in creating a comic yourself?

Falp: I remember when I first started making comics and I thought ‘if my art doesn’t improve its okay I’ll just become a writer’. Now I practically hate the writing part and each book I do I try to trim the writing part as much as I can! At the moment I’m down to writing pages numbers on a piece of paper and writing a quick sentence about what needs to happen. In fact, I don’t even write a proper script until I have to send it to a letterer.

What I do enjoy though, is the creative freedom that comes with doing both. I can swap panels, pages, even whole sections of the book around and no one can tell me otherwise! If I don’t like something, I’ll just change it. I’m not sure I like the idea of making comics within someone else boundaries, it’s supposed to be fun, after all! 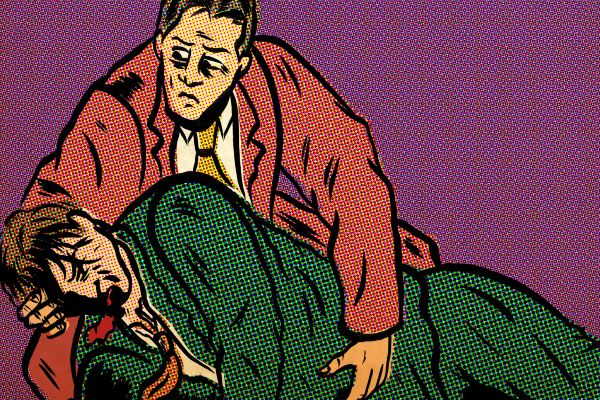 AP2HYC: The Fragment! definitely packs in some retro vibes in its appearance. What does your process involve in creating the distinct visual look to the comic?

Falp: That whole thing started when I was doing a short story for what eventually became my sci-fi anthology. It was my first time colouring art and it looked pretty terrible. It was just so flat. So I looked for some kind of different way of doing things to make it look better. One book that was next to me for some inspiration was a copy of Ed Piskor‘s X-Men: Grand Design. I picked it up and wondered if giving it a retro look would make the colours look better. I learnt how to use halftones and create ageing effects in Photoshop. That’s when I turned to a bunch of Jack Kirby books first for colour reference but now, for The Cambridge File, a lot more. I took a lot of cues from his camera angles and his powerful poses. While digging through these 60’s comics, I couldn’t help but be pulled in by the fantastic aesthetics. The Fragment has become my love letter to those books, really.

AP2HYC: You’ve been working with letterer Mike Stock on this comic. What’s it been like to work with him?

Falp: Mike’s been really fantastic and his help for that first book was very important. I hoped that we would agree to work on the book and when he sent those first few pages over I knew I had made the right choice. Mike’s worked on plenty of books over the years and was pretty crucial in helping me prepare the files and all that stuff because it was the first time I had sent a book to the printers.

AP2HYC: The printing of the comic is guaranteed thanks to this successful Kickstarter campaign. Where does The Fragment! go from here?

Falp: Well, short term, there’s a stretch goal that gives each physical backer an extra 12-page mini-comic to go with the book that features two never before seen stories. I think that’s the beauty of this series – I can just dip in and out of stories, recount Locke’s missions, what’s going on inside his head, all of that stuff.

In terms of what happens after that, I’m not sure anymore. When I started to draw The Cambridge File, I was confident this would be the closing chapter. Now, seeing everyone’s reactions, kind words and my growing fondness for the books, we may not have seen the last of The Fragment!

Will you be getting sucked into the spy-fi adventures of The Fragment!? Let us know in the comments section below or send us a Tweet!