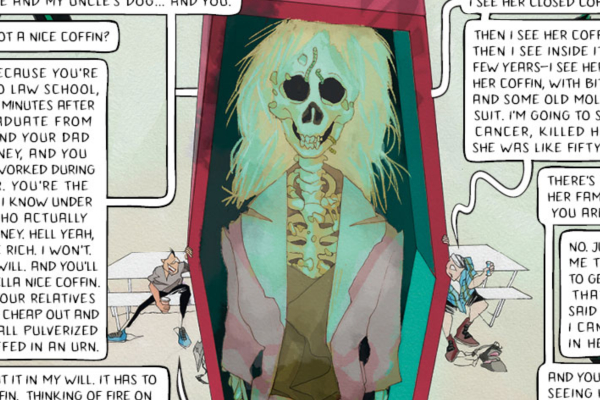 Outside makes no qualms about pushing the sequential medium to its structural limits. The anthology, edited by Doron Hamburger and Amir Naaman, describes itself as bringing together modern horror’s finest writers and arms them with a plethora of diverse illustrators to bring their tales to life. Reading through Outside however, the idea of ‘finest’ feels irrelevant, as Outside takes every gleeful opportunity it can in crafting comics that don’t feel like comics; comics that wilfully demolish the boundaries of sequential story-telling, as if in an experiment to wring forth the ultimate horror factor in each of its stories.

Some of Outside‘s contents are more traditional than others, such as The Boy Who Became Invisible, Last Call and Shiv, which share a straight-forward attitude in their stories. Solid and Hex Change take more of an advantage in splitting the comic format up, placing panels and speech bubbles in unexpected positions. The likes of Silky’s Room and Morphine & Others tear down the rational notion of how to format a comic completely, jaggedly weaving text and visuals across each page into a distorted form. 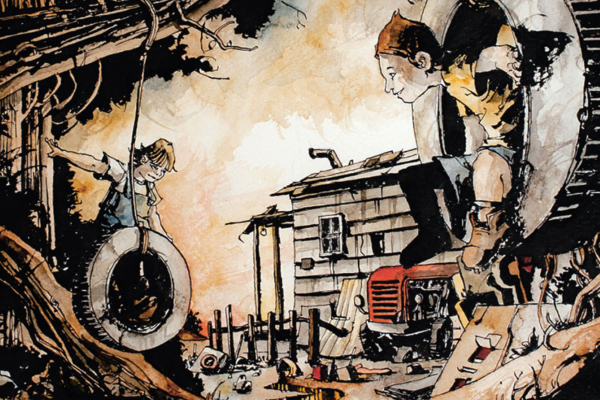 The variety and style of themes, stories and art on display is engulfing. Outer body experiences, suicides gone wrong, racism, demonic neighbours, murderous teens, mental breakdowns. It’s complicated to provide a suitable summary or critique of Outside because it’s a distinctly complicated body of work. The manner in which Outside does and doesn’t break down the comic form, depending on the strip in question, leaves it treading murky waters when each strip attempts to convey its sense of horror. Sometimes, the horror flows with a natural tension, whilst elsewhere it feels stilted and artificial.

Solid‘s playful integration of hefty speech bubbles into the rectangular layers of the comic itself matches John Shirley‘s tale of teenage angst morphing into suicidal tendencies with great effect. Gabriel S. Moses‘ art thrives in the smaller moments of the story, the minute details screaming with the loudest voice. Diamanda Galas‘ Morphine & Others is less successful. Although it bears an unhinged, graffiti-esque manner, it fails to strike. Such is the deranged nature of Morphine & Others that it feels less chaotic, rather, just cluttered. 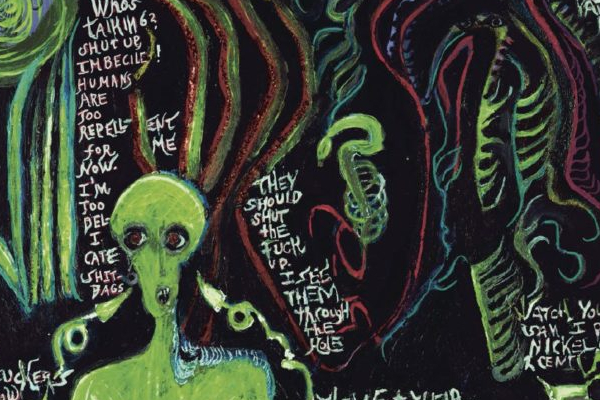 More often than not though, Outside remains robust. It’s bursting with smirk-ridden means and motives to petrify, to make you squeamish, to question your understanding of what can and can’t function as a comic. It should be applauded for stepping outside of the comfort zone, as all good horror should, even if some of it’s individual strips don’t totally land with the desired impact. An anthology of this nature ensures that a variety of tastes are met, and just about every strip boasts an enjoyably uncomfortable atmosphere. The quality of artists involved in Outside results in merely -looking- at these strips being enough of a winner. Outside is a menacing, unflinching venture. Not recommended for the faint of heart.

You can discover more about Outside from the anthology’s art director and designer Ashram J Pure. Have you already been terrified by the anthology? Let us know in the comments section below or send us a Tweet!