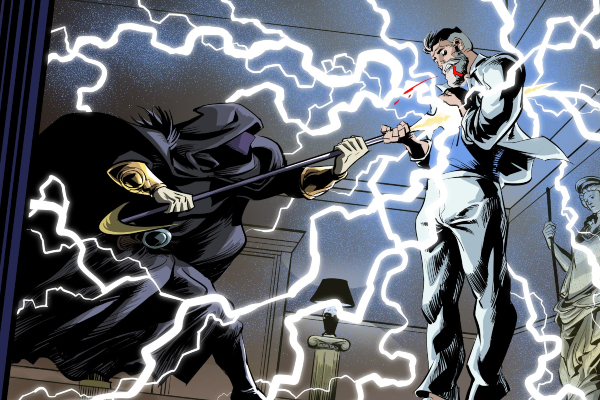 In his debut as a comic book writer, Matt Ringel is taking a tale of underworld crime and Gods stripped of their powers to Kickstarter, with a healthy dose of 80’s vibes. Fallen combines crime, fantasy, mystery together into an intriguing debut issue, with Matt working alongside artist Henry Ponciano and letterer Toben Racicot in creating a lush, retro-tinged New York City for their adventurous tale of organised crime to take place in.

Fallen tells the story of Gods brought to Earth and having their powers taken from them, resulting in these Gods forming underworld crime organisations and utilising enhanced humans, dubbed wards, to carry out their dirty work. We caught up with Matt to discover more about the comic!

A Place To Hang Your Cape: Fallen blends omnipotent beings with retro detective thriller. Why did you want to create this comic?

Matt Ringel: I’ve personally been a fan of both mythology and detective thrillers for a long time. I thought it’d be interesting to combine the two and create a story where the gods, stripped of their powers ultimately need a human to solve their problems. While they’re immortal, their vanity makes them quite vulnerable. As for the retro 80’s setting, I find this decade is rich with nostalgia. It’s also a very organic time, pre-internet and cellphones so your characters have to solve issues without the technology we have today.

AP2HYC: Where did the inspiration come from to combine such juxtaposing ideas as Gods from multiple religions in a murder mystery setting?

Ringel: The inspiration came from a lot of different places to build the story. The 80’s had some of my favourite movies and stories but I also enjoy stories that use the 80’s in a setting that almost embellish the nostalgia a bit, like Stranger Things or Drive. I also took inspiration from stories that focus on criminal underworlds like Scarface, The Godfather and a large part from John Wick. I liked the idea of a criminal underworld controlled by multiple different families. I then imagined those families were actually families of different gods. As for the mystery side to the story, inspiration came from places like the Fables based video game The Wolf Among Us and both Blade Runner’s. The gritty, flawed but driven detective is a fun protagonist to work with. 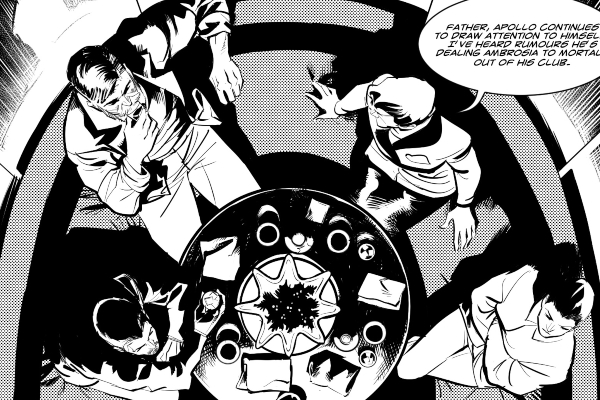 AP2HYC: This campaign is raising funds for #1 of the comic. What can readers expect from this first issue?

Ringel: For the first issue, readers can expect to get a sense of the world I’m building with Fallen and become familiar with a few of the main characters and mechanics of how the world works. Issue #1 is an introductory issue to a story that will build in future issues. The artist for the story, Henry Ponciano has brought some very professional work to the book so I hope readers will enjoy the imagery.

AP2HYC: How will the story progress from there?

Ringel: The story will progress from issue #1 over a limited series. It’s more of a macro-series than a mini-series because I have quite a few issues planned out but it ultimately has a definitive ending, at least for this story arc. As the story goes on, the world will expand introducing new characters and the action will definitely start to ramp up. 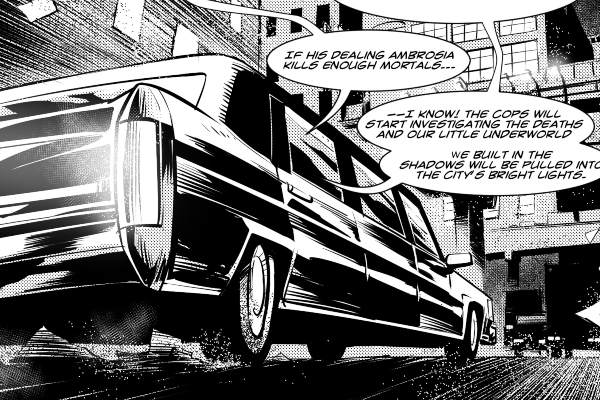 AP2HYC: Fallen feels like it boasts a confident vision to its story, what’s it been like working with artist Henry Ponciano?

Ringel: Henry has been awesome to work with. The idea of starting my first ever comic project was quite daunting and I needed to learn about an industry I had no knowledge of. When I advertised I was looking for an artist, I was bombarded with offers of varying skill level and styles. It’s awesome to see that many talented people out there. However, after narrowing it down, I felt Henry’s style suited the story the best and through discussions he shared some of the ideas he envisioned when he read my script. A lot were similar to what I saw when writing it so it was cool to see that someone was able to picture what I had in my head. Henry was also a published author with several books in his portfolio so it was good to have at least one of us experienced in the industry.

AP2HYC: What kind of style would you say Henry is bringing to Fallen?

Ringel: A lot of Henry’s work has hard, clean lines. He brings a very professional talent to the project. If I was to say which style in particular he’s using to bring the story to life, I’d have to say it’s like a neo-noire style. Similar to Blade Runner 2049, it will have the dark grittiness of a noire detective story but use the bright neon colours of the 80’s. 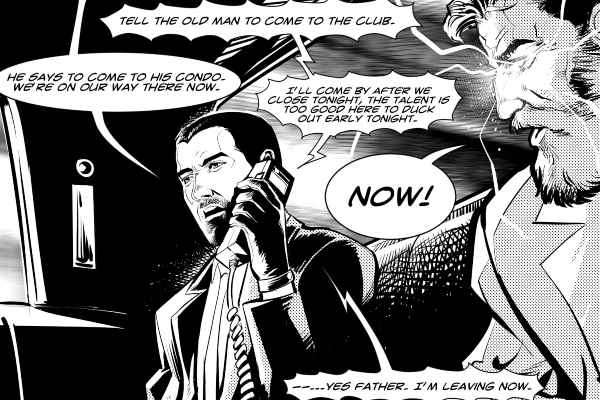 AP2HYC: Fallen packs in numerous wild-looking ideas, how rewarding has it been for you to bring this comic to life?

Ringel: It’s been really exciting to work on this project. It started out as an idea for a novel but as the story developed, I started to think that it’d be better suited for the comic platform. Since this is my first comic I’ve worked on, it’s been a challenging process. I had to study an industry that wasn’t well known to me, and adapt writing practices to that of a comic book script. It’s been stressful at times but the whole experience has been quite rewarding.

Will you be backing Fallen on Kickstarter? Let us know in the comments section or send us a Tweet!