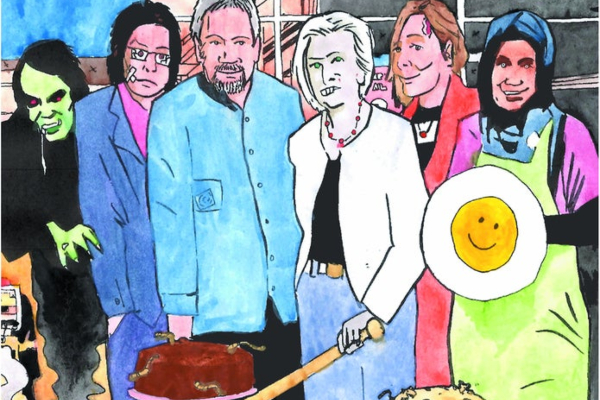 Comics writer and artist David Robertson has produced an eclectic array of enjoyably surreal comics over the years through his self-publishing imprint Fred Egg Comics. His comics touch upon a variety of themes, subverting a solid sense of reality, and drawn in an stripped-back, often black-and-white manner.

Robertson also writes about comics, both his own and others, via his blog. From examining the greatest Judge Dredd comic of all time to exploring how public libraries should shelf comic books, as well as serialising his latest comics, his articles are as diverse as his comics. 2019 marks the 10th anniversary of Robertson’s blog, and he’s holding a competition in celebration of this milestone. Every Fred Egg Comic currently still in print is up for grabs, all you have to do is retweet his Tweet offering these comics by the 21st of August, and a winner will be picked at random. 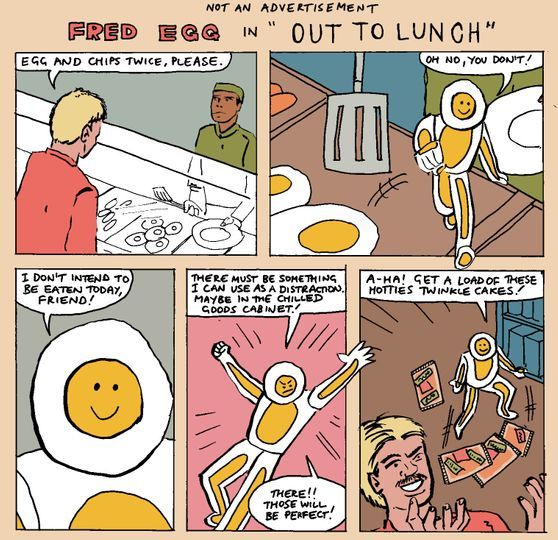 With so many comics up for grabs, there’ll be plenty of Robertson’s trademark surrealism to enjoy. We caught up with Robertson to find out more about his creative process in creating comics, and discover just who exactly is Fred Egg…

A Place To Hang Your Cape: How did you get into producing your own comics?

David Robertson: I always enjoyed drawing, like most kids. I’d draw pictures copying out of comics or drawing from life, or making up imaginary stuff. I also liked writing stories at school. I read comics all the time, so it was natural to make them as well. The earliest one I remember doing is a big crossover story starring the cast of Star Wars, the Hulk, and the Saint (the little logo came to life – not Simon Templar). When I was seven or eight, a friend of mine and I made a deal to create a comic for each other every Friday, and as part of this I did a story about Fred Egg.

He was an egg who in the middle of frying in a pan, magically came to life and started running around having adventures. His name is Fred because in a Dundee dialect, that’s how you’d pronounce “fried”. After that I created a “Fred Egg universe”, probably inspired by the super-hero comics I read, and would make egg versions of whatever characters I was interested in. So that’s how I got into producing my own comics, and I haven’t stopped since. I can vaguely remember what was in that first Fred Egg comic, and it’s long gone. It probably went into my friend’s bin that weekend!

AP2HYC: Which comes more naturally to you: writing or drawing? Or are the two equal?

Robertson: Comics do involve writing and drawing, but not in the same way as say, an illustrated book. There is a third element running throughout composed of both, which I would term storytelling. It takes in the interchange between word and images, and between the images. When I write, I do it in terms of the panel layout of the page. I don’t write scripts, instead I draw out panels and write in those. This means I am controlling the storytelling as I write the dialogue and other text. I’m not really concentrating on drawing at this stage. I don’t know that writing and drawing are equal; maybe my answer is they can be sometimes? It’s more that they both must operate within, and be subservient to, the storytelling as I have tried to define it above. 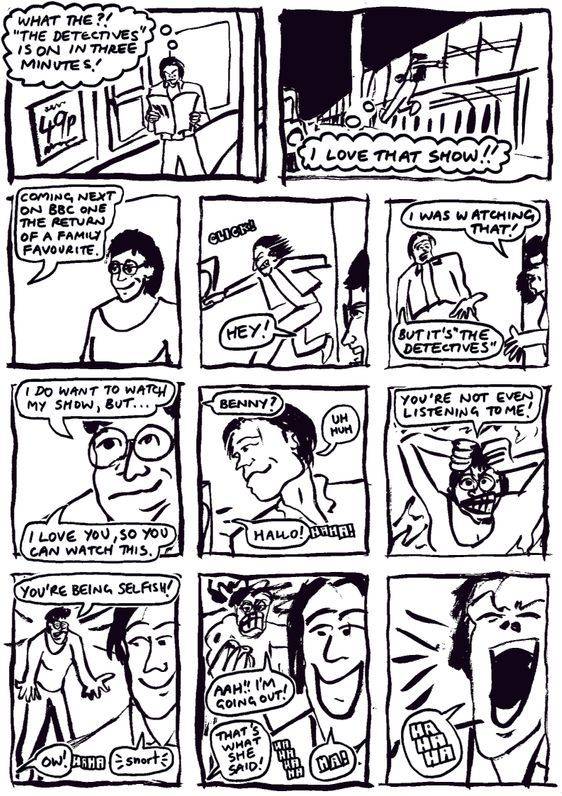 AP2HYC: There’s a strong surrealist nature to your work, a twisting of reality on its head in comically offbeat scenarios. Why might this be?

Robertson: I guess that must be the way I see the world. I don’t think, “right, time to make a surreal comic”. I get an idea for a comic, jot it down and later flesh it out. Then others might tell me it’s surreal. It’s an honest thought from my psyche, so very natural and from the heart.

AP2HYC: Nostalgia and autobiography are other themes that creep into your work. What exactly inspires you to create a comic strip?

Robertson: Life and anything in it inspires me, which I’m aware is as vague and general as I could possibly be. What it means in practice is that I have learned to recognise when I have a thought that might be the kernel of an idea for a comic. This has become an ongoing habit for me. Once I do that, I immediately jot it down for later, in the form of a line that would probably not mean anything to anyone that saw it, but serves as a reminder to me. It means that whenever a project or opportunity comes up I need an idea for, I can have a look over my list of ideas and see if anything fits.

AP2HYC: Your art has a very intimate, home-grown, and rugged feel to it, with a lot of emphasis on character interaction. What does your illustrative process involve?

Robertson: Once I’ve written and laid out a story, I have to switch the more illustrative side of my brain on. Say I’ve written a scene in a certain street. Okay, great. Takes a few seconds to write “In such and such street…”. Now I am unable to just draw the street from memory. So I’ll get looking for reference pics to work from. A lot of time doing comics is spent on the research before starting to draw.

Once I’m actually drawing, I keep all the writing layout work in one sketchbook, and move to separate piece of paper to do the pencils. Once that’s done, I put tracing paper over the pencils and ink on that. Then I scan the inks and will do any tidying up, and colouring in Photoshop if the work requires that. I like to keep the different stages of the work, having messed up too many pencilled pages I like with awful inks over the years.

AP2HYC: You’ve had other artists illustrate your scripts in your various comics. How does bringing in an outside party compare to writing and drawing comics by yourself?

Robertson: I mentioned how I don’t write scripts, I loosely sketch out a page. In the past when I collaborated with artists I would send them the scan of this page. “Here, draw this!” I felt I was giving them everything they needed. But then I got feedback saying they got the scan and were disappointed, thinking, “Oh, he’s done it all.” So I realised that some artists want to be in charge of the layouts too, it keeps it interesting for them. What this meant is that I still write the same way in the form of layouts, but I write it up into a traditional script before I send it to them. I try to maintain as much control over it as I can in a script, and then see how they interpret it. 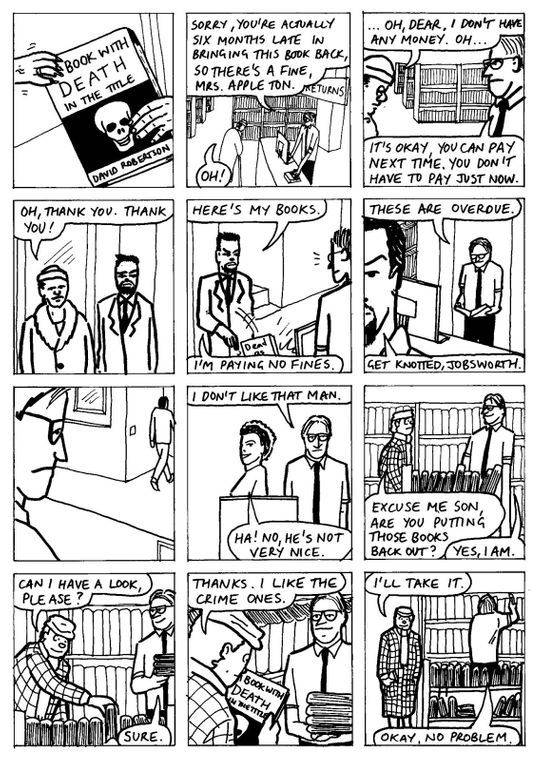 It’s an interesting process to see what artists do with stories I’ve come up with. You get some real surprises. Another thing that happens is that at the beginning of the process I’ll come up with a good idea for an artist to draw, and have feelings of I like this idea, I want to keep it for myself to draw! I’ve had to learn to let good ones go.

AP2HYC: But a Dream! features various strips dating back to the 1980s, whilst others feature wholly unique material. How do you map out a Fred Egg Comic in terms of content?

Robertson: I have a few different streams of what I do. I’ve done a few longer stories; Berserkotron, Dump, and Bell Time. These are all 50 odd pages each. The first two were done as contributions to an amateur press anthology, and the last was a webcomic. So these get completed and published as print comics. Dump was a three issue series, with a lot of smaller stories included too. I work on different comics for different projects, so I am responding to various themes and prompts which push my comics into all manner of areas. I collect these into my own comic books and try to release one a year. But a Dream! was a bit of a one off, in that I specifically decided to do a project to go through my comics from the 90s and collate them into a comic. I recently posted online, “You can do whatever the f**k you want in your comics. So go and do that now”.

AP2HYC: You’ve spent 10 years blogging about comics, and even longer making them! Where does Fred Egg Comics go from here?