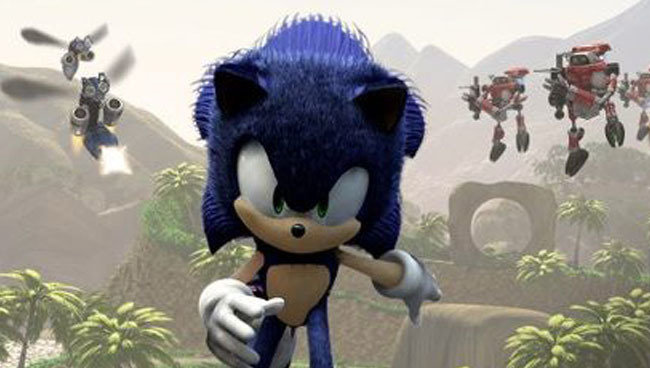 It is no secret of my contempt for the live action Sonic the Hedgehog film, currently rescheduled for 2020. The reimagined designs for the Blue Blur are nightmarish, and details about the plot are dire at best. While director Jeff Fowler has promised to redesign Sonic’s appearance, some things should not be adapted into live action, and Sonic is one of them. But, perhaps the 2013 fan film by Blue Core Studios was foreshadowing what was to come. Written and directed by Eddie Lebron, the fan film is a decent, if cheesy, elevator pitch for what Sonic might look like in a live action setting. It is a fun romp, with a limited budget for a production that matches, but should’ve convinced filmmakers that Sonic just doesn’t work in a non-animated world.

Blue Core Studios had previously made a feature length Mega Man fan film, which was a bit clunky, and had awkward special effects. Lebron made it clear he was doing this Sonic film as an experiment. The fan film is presented as an obscure prologue/prequel to the beginning of Sonic’s adventures, but pinches elements from across the board. It feels like a set up for the 1991 video game, but could also be based within the “SatAM” or Archie Comics’ defunct continuities.

The film begins with Dr. Ivo Robotnik, played by one DJ Hazard, bombing South Island to wipe out all the unseen Mobians there. His air fleet then takes over Station Square, and hires Screw Attack employees to be his Fox News mouthpieces. A whole load of internet celebrities show up during these scenes like Brentalfloss, James Rolfe, Stuttering Craig, and a very lost-looking Doug Walker. Maybe his confused expression would explain his actions, or rather lack thereof, during the outrageous Channel Awesome debacle.

Some time jumps by, and we learn Sonic the Hedgehog is running around as a surviving Mobian who fights alone against Robotnik. Dr. Robotnik targets the soldiers of G.U.N., a platoon of which are saved by Sonic. He runs off to defeat a squad of Badniks, and use a deflected missile to bring down one of Robotnik’s Egg Carriers. Robotnik starts raging until one of his robots presents him one of the Chaos Emeralds, hinting he wants to collect them all. The film ends with Sonic finding the Green Hill Zone, whilst Knuckles the Echidna (who has fingers!) watches from afar, making vague hints at what is to come.

This fan film is only 18 minutes long, and doesn’t have a coherent plot. It is a taste of what such a movie could look like, and small budgets aside, it looks fine. The cinematography has dramatic flair and when Robotnik invades, its colour palette is bleached. Station Square is clearly New York, and while the aforementioned internet cameos are cute, they can be a little distracting. DJ Hazard does a decent performance as Robotnik, influenced by Jim Cummings’ chilling “SatAM” counterpart, though a little more gruffer.

Of course, the big draw of the fan film was the casting of Jaleel White as Sonic. White previously voiced Sonic in Adventures of Sonic the Hedgehog, Sonic Underground, and “SatAM”. His new take on the character steers away from the staple “totally radical” attitude, portraying Sonic as a little more modern and mature. As for Sonic’s design, it is at least on point. Aside from a ventriloquist dummy’s mouth and comb over quills, the design is bang on. There is no need to complain about the design being stiff and a little creepy, as that was bound to happen with this type of fan film. Though on that note, the CGI doesn’t quite blend with the live action locations. The details of Dr. Robotnik’s Badniks are fantastic, but they have little impact or interaction with the environment around them.

But, the big question is does Sonic work in live action? No, he doesn’t. Like it or not, Sonic is purely a character who belongs in an animated world. Blue Core Studios created this fan film as an experiment, and it doesn’t quite work. Not because they are on a micro budget, or because the character design is a little uncanny. It is because Sonic doesn’t belong in a live action movie. This doesn’t mean Sonic can’t be the focus on an engaging story, but some things should just remain as cartoons. Now if only Paramount understood this.

Should Sonic stay in animation only, or should we embrace the character in different mediums? What are your thoughts on Blue Core Studios’ fan film? Are you dreading the 2020 live action movie? Leave a comment below, or on Twitter!