Home » The Danger Escalates in Comichaus #7 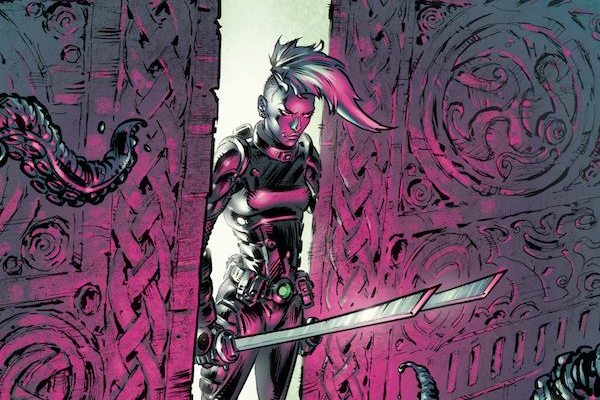 We’ve fallen off the bandwagon of late with our Comichaus reviews, but now that we’ve managed to get back on track with them, the anthology hasn’t been forgiving. #7 plunges us back into the frenzied worlds of Chalk, Mandy the Monster Hunter, Cold and beyond, with enjoyably extreme results.

The opening and ongoing strip Chalk continues to be the highlight of Comichaus. This latest instalment sees our time-crossed ex-partners in crime Jackie and Iblis continue to try and make sense of a series of synchronised murders happening around them. Consultations with a tree spirit result in Jackie doing battle against a skeletal monster, who’s busily harvesting these suicidal souls.Surely that’s enough for you to be picking up this anthology. I cannot wait for the forthcoming collected edition of Chalk to come out. There isn’t much I can wax lyrical about Chalk that I haven’t before, but this Steve Horry-written, Catia Fantini-drawn tale of snarky, fantasy adventure continues to boast a sense of scale that’s breath-taking. Fantini’s art feels like it’s been kicked into a higher gear as this latest instalment dives deeper into the fantasy elements of the strip. 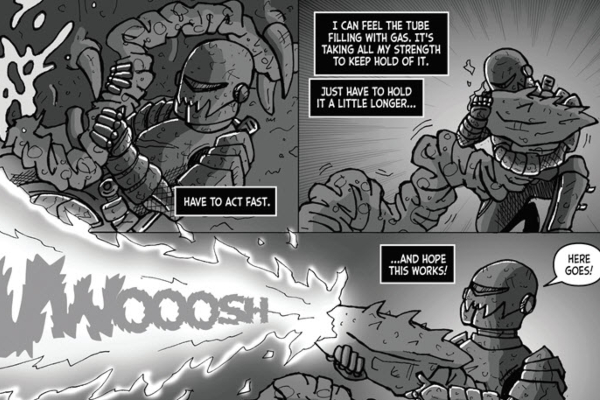 Also kicking the action into overdrive is the third chapter in Mandy the Monster Hunter: Battle of Monster Rock. Here, the actual story takes something of a backseat, as our steel-nerved heroine Mandy is plunged into a skirmish with a handful of monsters that have infested a remote island. Mandy the Monster Hunter failed to strike a chord with me before, owing to its all-ages vibe feeling out of the place in an anthology like Comichaus. Here, it feels more at home with its rapid-fire depictions of slice ’em/dice ’em monster action courtesy of Vince Hunt.

The Blue Fox Comics-produced Cold continues to be a comparatively muted affair, with its cautiously executed explorations of a low-key apocalypse dominating the Earth. We see the fallout of our heroine more clearly than before, with herself settling into life as fighter against the Colds, mutated versions of human beings. It’s a tonic compared to that other apocalyptic serial Feathers. Simon Birks‘ emotionally resonant script and Lyndon White‘s oddly evocative art make for a compelling duo. Joining the Comichaus ranks are Madius Comics’ Rob Jones and Michael Sambrook with a new ongoing strip, Homeopathos. A superbly twisted tale of mental manipulation after a medicinal solution for insomnia goes wrong for office worker James, it feels so suitably Madius-esque in its sly sense of humour and freakish body horror. Gavin Fullertone‘s art does a superb job in arousing the nightmare-ish qualities to the strip. 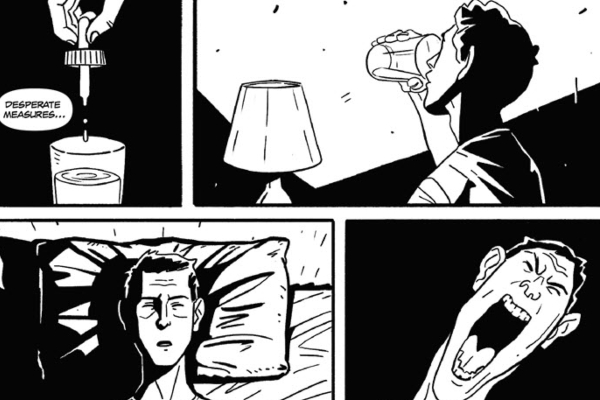 Chris Robertson and Richard Macrae‘s runaway vigilante strip Mia is a lesser gem in this particular issue. Comparatively bland compared to past instalments, it promises future high-stakes adventure with further issues, but this current chapter fails to hook the reader in. The one-off Gods of a Lesser Sphere provides an enthralling existential climax to the issue. It’s an inquisitive tale on a grandiose scale of a shape-shifting alien who passes judgement on humanity, and proceeds to cleanse the species of its perceived wrongs. It’s a well-worn trope of philosophical sci-fi, and some of the dialogue is downright hokey, but it’s delivered with an ethereal gusto via Mark Mccan‘s script, David Yeh‘s art and Daniel Fox‘s lettering.

This seventh issue of Comichaus keeps the reader on its toes with regular strips having their stories expanded upon in explosive style, and the newer strips bring an air of zest to the proceedings. There have been better issues of Comichaus than this in the past, but #7 remains a firm reminder of how much fun Comichaus is, and how it brings together many recognisable names from the U.K. indie comic scene, as well as championing new talent.

Have you been keeping up to date with your Comichaus issues better than we have? You can discover more about the anthology, and the app, from Comichaus themselves. Let us know in the comments section below or send us a Tweet!