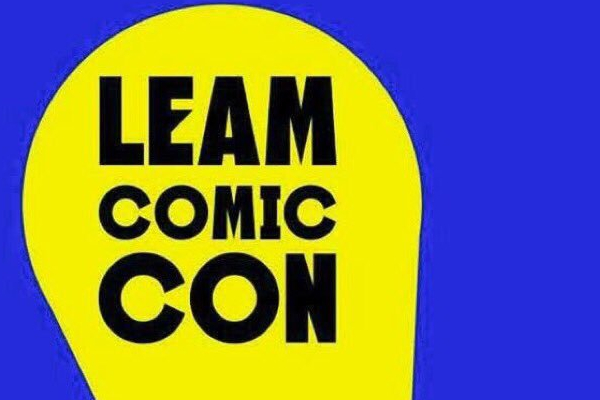 Five is the magic number for Leamington Spa’s comic book convention, Leam Comic Con, as the independently run show gears up for its fifth annual show to take place on Saturday the 5th of October at All Saints Parish Church.

The comics-focused show, which promotes independent creators and publishers alongside mainstream guests, has been keeping comic con about comics since it burst unexpectedly onto the convention scene in 2014.

Show Creator, Dan Mallier, said: “Leam Comic Con continues to champion comics, creativity and community, but none of it would have been possible without our early supporters who crowdfunded the show into existence.”

The origin of Leam Comic Con began when 74 comic book fans donated £1,796 to fund the first show, which was later acknowledged as a local cultural asset winning the ‘Outstanding Achievement’ accolade at the 2015 Leamington Business Awards.

Fans who prefer their comics a little darker can meet Jamie Delano the first writer of the comic book series Hellblazer and Mike Carey who wrote the devilish good spin-off comic, Lucifer and author of the popular novel The Girl With All The Gifts.

Hannah Berry the UK’s current and first Comics Laureate will also be in attendance. The job is described as an “ambassadorial and educational role” for the comic genre, intended to raise awareness of the impact comics can have on literacy and creativity.

For the last five years Leam Comic Con has delivered a unique, fun-filled day for comic-book fans and families. More than 4,500 people have attended a show and its organisers have given away 5,000+ comics to inspire a new generation of comic fans.

While big names in the comic book industry help attract crowds, Leam Comic Con continues to support independent creators and publishers, giving them an affordable platform to raise the profile of their work with 80% of tables reserved for ‘small press’.

Mr Mallier added: “We’ve seen over 20 small press comics launched at our shows. There’s no room for egos. Whether you’re a well-known name or indie creator, it’s your talent and approachable manner that ultimately depicts your success at our show.”

Leam Comic Con is a family-friendly show with its organisers choosing not to charge parents for tickets for children under the age of 13. Over the past five years 1,500 free Children’s tickets have been snapped up so young ones can enjoy the show, creative workshops and meet superheroes without breaking the bank of mum and dad.

Doors for the 2019 show will open at 10:00am for advance ticket holders. The general public can pay on the door from 11:00am with last admission at 4:00pm before the doors close at 5:00pm. Adult tickets cost £8 in advance. Children under 13 are free with a paying adult. Concessions are charged at £5 and registered carers are free.

If you want to help Leam Comic Con remain a permanent fixture in the convention calendar, please support the show by buying an advance ticket and telling others about the event. For more information and tickets visit: www.leamcomiccon.co.uk