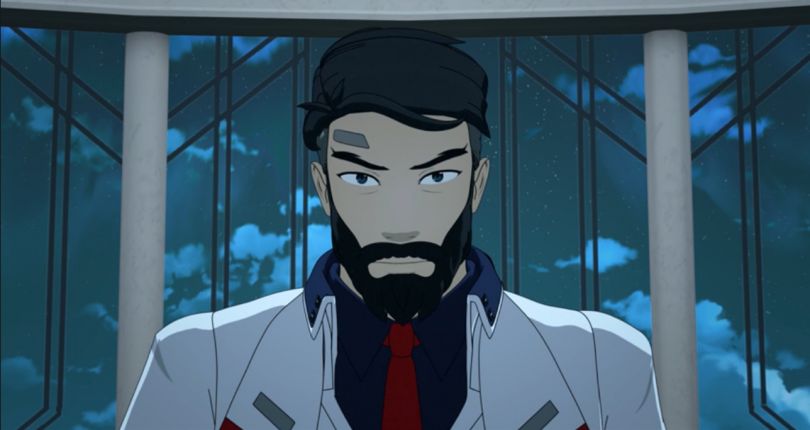 A major theme in RWBY Volume 7 is trust, especially having trust in others, at least if the theme song is any indication. “A New Approach” further highlights the need for trust amongst Team RWBY and their new Atlesian allies. But, there is already a presence of uncertainty and discord amongst the group as they come together to fight Salem. Strength will never bring victory, and it looks like General Ironwood may learn that the hard way, in spite of his good intentions.

After being arrested last episode, Team RWBY are flown to Atlas to await possible trial and convictions. While Nora tries to chew her way out of her metal cuffs, the group are reasonably morbid, but wonder why the Ace Ops personally came to arrest them. Another passenger in the prison ship, Forest, acts like the big shot in protest of Ironwood’s regime, but the amused pilots reveal he is just a low-level hooligan. He then reveals he is a supporter of Robin Hill, a character glimpsed in the opening, who is running for election to get a place on the Atlesian council so Mantle’s voice can be heard. Robin apparently has “Happy Huntresses”, all Atlas Academy graduates who chose become politicians instead of soldiers.

The ship flies up to Atlas, revealing our first glimpse of the spectacular, floating metropolis we all dream of. It brings up vivid images of Tomorrowland, or a city of the future that the 1960s often promised us. The ship makes a beeline for the imposing Atlas Academy, which has a Coruscant/Blade Runner style to it, feeling quite impressive yet controlling at the same time.

Upon landing, Team RWBY are marched into a rather tense elevator ride, where everyone agrees to follow Ruby’s lead and be careful with what they say. They pass through a rather large atrium with Atlas’ symbol on the floor. Gee, I wonder where the Relic of Creation is hidden. They then run right into General Ironwood, Winter Schnee, and Penny (YAY!). Upon seeing her sister in shackles, Winter flips out on the security guards to free the group. Ironwood still looks rough as hell, but appears to have a developed a more open, kinder, if fragile approach towards others.

Ironwood welcomes Team RWBY into his office, the remainder of the episode having a lot of exposition to it. Winter rages at Weiss for stealing an Atlesian ship, but her Weiss is just happy to see her older sister again. Winter understands Weiss’ reasoning, cause, you know, terrible relatives and all that. She then throws some shade at Qrow for being irresponsible.

The discussion turns to the top secret information, but Penny and Winter both reveal they know about everything including the Relics and Maidens. Ironwood whips out the Relic of Knowledge from under his desk safe and sound. After Beacon’s fall, Ironwood included Winter, Penny, and the Ace Ops into his circle of trust. The general explains Ozpin has been fending off Salem’s attacks for years, but she keeps coming back stronger than ever. Ruby asks about the Relic of Creation, which is confirmed as a staff rather than a spear. It is secure in its vault, as is the Winter Maiden, who is described as being in “stable condition”. Qrow pretty much says that she is an old woman.

Ironwood is well aware that he looks like an untrustworthy dictator with the embargo and recalling the Atlesian military. He made the choices to protect Atlas, and is willing to play the badguy for the greater good. Ironwood makes the room “go dark”, i.e. secure, as a holographic platform arises from the floor. He reveals he has his own approach to deal with Salem, in opposition to Ozpin’s need for secrecy. He plans to launch Amity Colosseum into Remnant’s atmosphere, using it to build a new giant communications tower on top of it to establish global contact once again. In other words, they are going to build a satellite, away from Salem and the Grimm.

Qrow asks why the entire military is need for such an operation, Ironwood reveals he shall tell the entire world about Salem! The military on hand to bring about law and order in the inevitable panic and rise of Grimm attacks. Not everyone is thrilled with this development, but Ironwood and Winter believe this is the best option. Qrow objects to the unveiling of the truth, but Ironwood rationalises that without Ozpin’s guidance, he must use his own judgement.

Cue to the awkward introduction to Oscar, who has a hard time trying to explain why Ozpin has gone into mental hibernation. When Ironwood asks why, Ruby immediately jumps in and says they don’t know why he has gone. She also covers up the truth about knowing Ozpin’s past from Jinn, lying that all of the Relic of Knowledge’s questions were used up beforehand. I would assume this is to take pressure off of Oscar, but out of concern of what Ironwood would do if he knew that Salem apparently cannot be killed. Ironwood somehow doesn’t notice the shifty eyes or Ruby’s tone. Ironically, in their demand for truth from Ozpin last volume, now Team RWBY are, in a manner, covering for him.

Ironwood accepts their answer, though noting that Ozpin has exaggerated the truth before. In his own act of trust, General Ironwood returns the Relic of Knowledge to Ruby’s care, stating that it would be unfair to hold back information. Ruby glances worryingly at Oscar, who looks a bit bothered by keeping Ironwood in the dark, especially after he has been so candid with them. No doubt this unfortunate lack of trust will come back to bite Ruby.

With that out of the way, Ironwood proposes that Team RWBY should have their weaponry updated, pulling up a recording of Blake’s broken Gambol Shroud. Time for some new costumes and weapons next episode!

The group leave the office and are introduced to the Ace Ops. Names are given, but we don’t really put them to faces. We have the leader and Captain America lookalike Clover Ebi, along with Elm Ederne, Marrow Amin, Harriet Bree, and Vine Zeki. Harriet is at least named as the short, dark-skinned woman with the hairstyle similar to Russel Thrust of Team CRDL. Through guesswork, I am assuming Elm Ederne is the brawny, jolly woman who nearly breaks Ruby’s hand, Marrow is the wolf Faunus, and Vine is the Tibetan monk-looking bloke.

The Ace Ops are optimistic to be working with Team RWBY, especially Elm (and Marrow judging by his wagging tail). Penny opts to give the newcomers a tour, while Qrow receives a rather desperate hug from Ironwood. Looks like the poor general has been having a rough time. Penny’s tour appears to take, wearing the gang out. Penny goes on to give the long-winded answer that the teams will be staying in the dorms. Our favourite robot girl optimistically says that their time in Atlas will be “just like Beacon again”. Well, if it is anything like the first two volumes, then yes please.

Meanwhile, Dr. Arthur Watts is strolling around Mantle, speaking to Tyrian via comms. Watts points out they must remain mobile to avoid being exposed with a permanent base. Watts tells Tyrian that the security software in Mantle is not updated as often as in Atlas, allowing him to remotely shut down surveillance cameras as he goes by. After all, he designed the programs. Cut to Tyrian leaving a building, commenting that they all have their talents, leaving a trail of blood in his wake.

The fate of Atlas may have already been decided if Dr. Watts finds out about Amity Colosseum. Becoming a satellite, the colosseum will presumably have a failsafe mode, which will cause it to go into freefall if Watts got his hands on it. And if it is positioned directly above Atlas, then that could create a domino effect – the Amity Colosseum crashes into Atlas, which then crashes into Mantle, killing two birds with one satellite. At least, that’s how I envision it.

Team RWBY have very much been on their own for three volumes, and now they are in a more supportive environment. The lack of trust from Team RWBY towards Ironwood sends alarm bells ringing, especially when the general is just putting all of his cards on the table. It does make sense that the gang are a little cautious of Ironwood’s mindset right now, especially if they tell him that Salem can’t be killed. He’s a paranoid, authoritarian man, and finding out those he put his trust him have been lying, he might cut off ties with him. I don’t know what the moves are to secure the other two Relics in Vacuo and Vale (or wherever Ozpin hid it), but Ironwood might be betting on defeating Salem here and now.

Oscar is visibly bothered by Ruby lying to Ironwood, and may cave in to telling the truth as his friendship with Ironwood grows. I wonder if Ironwood will start treating Oscar as Ozpin rather than an individual person. It was also a surprise that Ironwood may not know the full details of Ozpin and Salem’s relationship, or he may know bits and pieces under Ozpin’s command.

The episode also confirmed that the Relic of Creation is a staff, and the Winter Maiden is implied to be a very old woman, and suffering from a medical condition. Maybe she is just so old, she can no longer care for herself, pressing the urgency to find a new Winter Maiden. On the other hand, she may be in stable condition because she was previously attacked like Amber was by Cinder. The first sounds more engaging, as it would be differently seeing a dutiful maiden who doesn’t abuse her powers or abandon her responsibilities.

The Ace Ops (a pun of “Aesop’s Fables”) are an interesting bunch, though hopefully we’ll get names to faces in the next episode. Introducing five additional new characters to an already huge cast hopefully won’t take away screentime from the main cast, or prevent that Ace Ops from being characters with quirks and no depth. One is a Faunus in a high-ranking position in Atlas, so there is something there to explore.

Did you enjoy this episode of RWBY? Was it wise of Team RWBY to keep secrets from General Ironwood? What do you think Watts and Tyrian are up to? Leave a comment below, or on our Twitter and/or Facebook feeds.